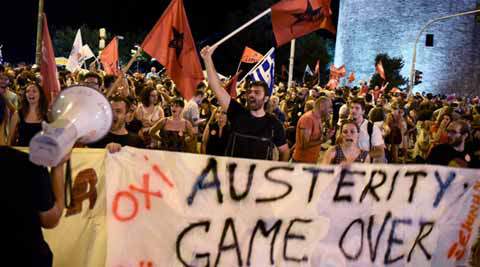 In the struggle between European and U.S. finance capital, on one side, and the work force of Greece, on the other, the choice should be easy.

Any class-conscious worker, any progressive individual from Tierra del Fuego to Lapland, from Vladivostok west to Honolulu, should be in solidarity with the Greek workers — on the streets of their cities if possible.

Imperialist finance capital, using the debt that various countries, cities and territories have accumulated, are waging war on the workers around the world. Their banks are in trouble because they forced loans on people who can no longer pay them back. And they are using economic, political and military power to squeeze the workers to pay the banks.

We said the choice should be easy. What complicates the choice is the mountain of lies that finance capital orders its media mouthpieces to propagate.

For example, the lie that they offer money to Greece to help the Greek people. No, nearly all the money goes to rescuing the banks so they don’t have to write off the loans as unpayable. That’s one Big Lie.

Another Big Lie is that the conflict is between German and Greek workers, that German workers “resent” bailing out allegedly laid-back Greek workers. This is a lie on two counts. First, it’s not the Greek workers but the banks that have been bailed out. Second, according to figures from the Organisation for Economic Co-operation and Development, Greeks, when they have jobs, work on average more than 2,000 hours a year, while Germans work less than 1,400. This ignores the fact that 10 percent of the workforce in Greece are migrants, who work harder still, just as migrant workers do in Germany.

The truth is that the battle is between the German imperialist banks — plus the French, Dutch, British and U.S. big banks — and the working people of Greece.

What this means is that all labor union members, all unemployed youth, from the European Union to the United States, should find a way to show their complete support for and solidarity with the working class in Greece.

It’s a struggle that involves all of us.