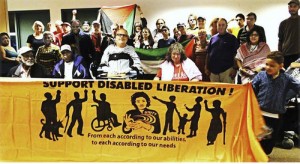 July marks the 25th anniversary of the passage of the Americans with Disabilities Act. The entire month has been declared Disability Pride Month in the U.S. A Disability Pride parade being organized for July 12 in New York by a coalition of disability rights groups has also been endorsed by several city agencies and elected officials. A Disability Pride event is also scheduled for Boston on July 22.

How do disabled activists view this momentous anniversary and the perspective for the disabled liberation movement? WW canvassed a number of members of the Workers World Party People with Disabilities Caucus. Here are their views.

Brian Shea, a long-time disability civil rights activist and founder of the WWP Disabilities Caucus, said of the ADA at a WWP forum on July 28, 2012:

“The Americans with Disabilities Act (ADA) was enacted by Congress and signed into law in 1990. It is a civil rights law that prohibits, under certain circumstances, discrimination based on disability. The ADA defines disability as ‘a physical or mental impairment that substantially limits one or more major life activities.’ …

“The right wing attacked this law even before it was passed. Outright bigots, such as Sen. Jesse Helms from North Carolina, tried to stop the momentum for passage of the ADA. They whipped up a frenzy and fear around people with AIDS, who are protected by the ADA. Helms and others tried to add to the ADA draconian restrictions on food service workers, concerns about sanitation or what illnesses could be contracted from food handlers that were unscientific. But activists organized to fight back — and stopped this.

“The ADA represented significant gains. But it is important to remember that, like any other piece of legislation, it reflects the strength of the class struggle at that time. The right wing was able to whittle away some of the ADA’s important provisions, gutting much of Title 1 of the law, which prohibited discrimination in employment.

“The ADA was won by fierce and protracted struggle by people with disabilities and their supporters. As with the Civil Rights Act of 1964, the struggle now is to protect its gains, get it fully implemented and expand its scope,” Shea concluded.

Because of the pressure of the disability rights movement, on Sept. 25, 2008, amendments to the ADA were passed. They emphasize that the definition of disability should be construed in favor of broad coverage of individuals to the maximum extent permitted by the terms of the ADA and generally shall not require extensive analysis. Important changes were made to the definition of the term “disability,” rejecting several Supreme Court decisions and portions of the U.S. Equal Employment Opportunity Commission’s ADA regulations. These changes make it easier for an individual seeking protection under the ADA to establish that he or she has a disability.

In a March 24, 2014, talk at a WWP International Women’s Day forum, wheelchair user Joyce Kanowitz, a senior and a poet, asked:

“What is disability? How is it seen? With derision, compassion, bewilderment. Disability is the inability to live freely without restraints, either physical or mental.

“Many disabilities go unnoticed or are assumed to be something they are not, like deafness. I’m going to steer away from the traditional view of disability and include in my list other forms not generally recognized as inhibiting mind and body. They are homelessness, incarceration, obesity, old age and various conditions of chronic health problems.

“Before the Americans with Disabilities Act was passed, there was no access for the disabled on public transport. ­Betsey Gimbel, a courageous WWP Disability Caucus leader and secretary of Disabled in Action, who used a wheelchair, took on the city of New York to change this. She was undaunted by resistance from the bureaucrats. After several years, wheelchair lifts and ramps were installed on city buses and elevators in some subway stations.

“Another fiery advocate for political change, who also uses a wheelchair, is Workers World Party founding member Rosie Neidenberg, who struggled and fought not for herself but for revolutionary change for others. In the 1950s she audaciously interrupted a red-baiting House Un-American Activities Committee hearing and today at the age of 94 still works faithfully every week on mailing out Workers World newspaper.

“We have a disabled caucus which meets fairly regularly. You are welcome to join us here and at our demos. We need solidarity and unity in all of our struggles. It makes us strong. If you look at some of the photos of demos, you will see people in wheelchairs in the forefront.”

Bill Bateman of Providence, R.I., diagnosed with bipolar depression, commented: “The ADA on paper was a huge victory for access to public places, public transportation and healthcare — physical and mental. However, like so many 20th century legal victories, many of its promises have become hollow and unkept due to lack of funding and unrelenting pressure from the ruling class and right wing to limit their scope and effect, and require a 21st century infusion of revolutionary energy from the masses.

“To that aim, a two-part Providence-Boston Plan is being launched which will include a 21st century Economic Bill of Rights to guarantee funding of all human needs and a new Freedom Charter calling for special measures to guarantee the rights and power of people of color, whose legal victories in the 20th century are clearly no longer respected and upheld by the ruling class and forces of racism.”

Joyce Chediac, who is hearing impaired and dyslexic and has provided care for several family members with disabilities, commented:

“This phenomenon has become so common among women in their 40s, 50s and 60s that sociologists use the term ‘sandwich generation’ to describe the squeeze many women feel as they exhaust themselves caring not only for their children, but also for their aging parents, siblings and friends with disabilities.”

Jesse Lokahi Heiwa of Philadelphia recently suffered a stroke. A queer person of color active for social justice and a caregiver to an elder, he says: “The passage of the ADA was a result of the movement of people with disabilities boldly acting on behalf of their own lives and each other’s. This movement is a key component of what a socialist society would look like: inclusive of all, involving all, for all the people. While much has been done, there is much more to achieve. Join and move forward together. Venceremos.”

Rene Imperato, a Vietnam veteran with several disabilities, including post-traumatic stress disorder, commented: “The safety of disabled people of color and disabled lesbian, gay, bisexual, transgender and queer people, especially those who use crutches and wheelchairs, is compromised by their skin color and their expression. All people have the right to self-defense by any means necessary. However, often disabled people have more limited options in how physically we can defend ourselves, especially disabled people of color and disabled LGBTQ people, who are the most ­targeted.

“The scandalous non-application of the ADA at special events like concerts and sporting events is a fraudulent violation of the disabled’s right to equal access. We demand that all wheelchair ramps be inspected and be replaced or retooled when they no longer function. “

Johnnie Stevens helped repair a school for disabled children in Puerta Esperanza, Cuba, while on a work brigade after hurricanes Gustavo and Ike. Stevens’ disability — dyslexia — made his videographic assignment, which required precise logging of seconds, minutes, hours, megabytes and terabytes, much more difficult and time-consuming. But the Cubans were patient. He completed the video and received an award.

Stevens submitted an excerpt from a post by Vilissa Thompson, “#CharlestonStrong: Thoughts from a disabled Black South Carolinian,” about the massacre of nine African Americans last month in a Charleston church:

“These past two weeks have been very emotional for me, and as always, writing about my feelings and thoughts has been therapeutic. … My heart was troubled by the growing number of ‘excuses’ people and the media were making about the shooter’s actions. He was taught to hate; he was taught to think of Black people as disposable; he saw Black people as inferior, not human; he saw Black people as ones who were ‘taking’ his white women and staining the integrity of the nation. He was not mentally ill, as some always claim when white men conduct domestic terrorist acts on [U.S.] American soil. He was of sound mind, he was well aware of the devastation he would be inflicting on those families, the church community, the city of Charleston, the state of South Carolina and the nation. He knew the level of fear and pain he had the power to create, as well as the power to not create. He chose to express his hatred for Black people that day, and it was deliberate.”

Today, a mass struggle aims at obliterating the racist Confederate flag. The ADA, a concession wrested from the 1%, must also be enforced and expanded with relentless, continued mass struggle, just as a union fights to enforce a contract won from the bosses through struggle.

Edward Yudelovich, a WWP People with Disabilities Caucus organizer, has an emotional disability.