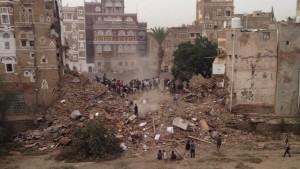 July 6 — The Pentagon-backed and -coordinated bombing campaign has killed thousands and wounded thousands more in Yemen since the air war by Saudi Arabia and the Gulf Cooperation Council began on March 26. The Pentagon is providing intelligence, refueling technology and diplomatic cover to the Riyadh-based alliance.

The alliance attacked the General People’s Congress headquarters of former President Ali Abdullah Saleh on July 6 in the capital, Sana’a, “killing employees and guards and destroying the building,” reported party official Faeqa al-Sayed. The bombing occurred while a meeting was going on with U.N. envoy Ismail Ould Cheikh Ahmed elsewhere in Sana’a. This was reported by the GPC’s news site, almotamar.net.

Al-Sayed said the bombings were “an attempt to derail the U.N. envoy’s mission.” Ahmed’s job is ostensibly to create conditions for a humanitarian ceasefire so negotiations for peace can take place there.

An alliance between the General People’s Congress and the Ansurallah (Houthis) has been fighting forces backed by ousted fugitive President Abed Rabbo Mansour Hadi, who is based in Riyadh.

Hadi insists that there can be no ceasefire until an agreement is reached to return him to power. Recent talks in Geneva failed because the U.S.-backed Saudi regime did not hold discussions aimed at a resolution of the political crisis.

Furthermore, the pro-Hadi Saudi-GCC alliance is demanding that U.N. humanitarian relief can only be guaranteed if the Ansurallah and GPC forces are withdrawn from the vast territories they now control in Yemen.

Human Rights Watch reported on June 30 that several airstrikes on Ansurallah-held areas in Saada City between April 6 and May 11, destroyed markets, homes, a school and a gas station — and killed at least 59 people, in violation of international law. A strike on a residential neighborhood on May 5 killed 27 members of the al-Ibbi family, including 17 children. With the U.S. providing technical assistance and political support for the war, Washington is just as responsible for these atrocities as are their regional allies.

On July 6, the Saudi-GCC alliance bombed a marketplace, killing many civilians in Yemen’s South. The Associated Press reported that day, “A massive airstrike by the Saudi-led coalition targeting rebels hit a local marketplace in Yemen, killing over 45 civilians. … More than 50 civilians were also wounded in the strike in Fayoush, a suburb just north of the southern port city of Aden.” An eyewitness, Abu-Ali al-Azikbi, saw “dozens of dead strewn about and a sea of blood, while the wounded were being evacuated to nearby hospitals.”

Millions are facing critical food shortages and death due to the bombing of civilian areas and infrastructure, such as ports, and the imposition of a blockade preventing goods from entering the underdeveloped Middle Eastern nation.

Since the bombing began, 20 million Yemenis have been wiithout access to safe drinking water, while more than 1 million people have been driven from their homes. The United Nations has announced the highest-level humanitarian crisis in Yemen where more than 80 percent of the people desperately need assistance.

This war has been described as an indirect conflict between the Islamic Republic of Iran and Middle Eastern countries aligned with Washington and Wall Street. However, Tehran’s efforts to provide humanitarian assistance or work toward a peace settlement have been rebuffed by Saudi Arabia and the U.S.

Iranian Deputy Foreign Minister for Arab and African Affairs Hossein Amir-Abdollahian says that the only solution to this war is a ceasefire and the adoption of a framework for dialogue between the parties.

Press TV quoted Amir-Abdollahian, “Since the onset of the foreign military strikes on Yemen, Iran has unequivocally announced that the Saudi military action is a strategic mistake, the only outcome of which will be the slaughter of the people of Yemen and the spread of terrorism and insecurity in the sensitive Persian Gulf region.” (July 6)

Despite Tehran’s diplomatic overtures, the U.N. refuses to impose sanctions or other punitive measures against the Saudi-GCC alliance, surrogate rebel forces and U.S. supporters,

Saudi-owned Al Arabiya TVA claimed that Tehran was coordinating Ansurallah military activities in Yemen through military advisers, some of whom were killed fighting in Yemen. But Amir-Abdollahian denied that Iran has military advisers there. He stressed, “Riyadh’s war crimes against innocent Yemeni people ‘have no justification.’” (Press TV, July 4)

This war of destruction and genocide is part of U.S. imperialism’s broader strategy to dominate the regions of the Middle East and North Africa. Developments in Yemen cannot be viewed independently of what has taken place in Iraq, Syria and Egypt where Washington’s interventions have left a trail of destruction, dislocation and death.