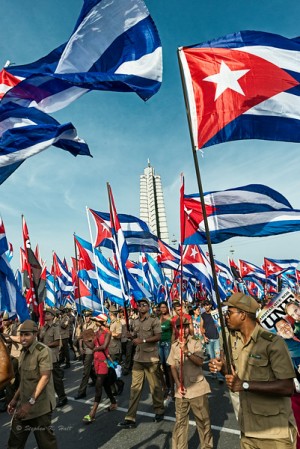 Statement by the Revolutionary Government of Cuba, July 1

After re-establishing diplomatic relations with the United States, the lifting of the blockade, among other aspects, will be indispensable for the normalization of relations. On July 1st, 2015, the President of the Councils of State and of Ministers of the Republic of Cuba, Army General Raúl Castro Ruz, and the President of the United States of America, Barack Obama, exchanged letters through which they confirmed their decision to reestablish diplomatic relations between the two countries and open permanent diplomatic missions in the respective capitals as from July 20, 2015.

On that same day, the official ceremony to open the Cuban Embassy in Washington will be held, which will be attended by a Cuban delegation presided over by the Minister of Foreign Affairs, Bruno Rodríguez Parrilla, and made up by outstanding representatives of the Cuban society.

As Cuba and the United States take this formal step, they ratified their intention to develop respectful and cooperative relations between both peoples and governments, based on the principles and purposes enshrined in the United Nations Charter and International Law, particularly the Vienna Conventions on Diplomatic and Consular Relations.

The Government of Cuba has decided to re-establish diplomatic relations with the United States in the full exercise of its sovereignty and with an invariable commitment with its ideals of independence and social justice, and of solidarity with the just causes of the world, while reaffirming each and every one of the principles for which our people have shed their blood and run every risk under the leadership of the historical Leader of the Revolution, Fidel Castro Ruz.

The re-establishment of diplomatic relations and the opening of embassies completes the first stage of what will be a long and complex process towards the normalization of bilateral relations, in which it will be necessary to solve a number of issues derived from policies that were implemented in the past that are still in force and affect the Cuban nation and its people.

There could be no normal relations between Cuba and the United States as long as the economic, commercial and financial blockade continues to be fully implemented, causing damage and scarcities to the Cuban people. The blockade is the main obstacle to the development of our economy; it is a violation of International Law and affects the interests of all countries, including those of the United States.

In order to normalize relations, it will also be indispensable for the United States Government to return to Cuba the territory illegally occupied by the Guantánamo Naval Base; cease the radio and television broadcasts, which violate international regulations and are harmful to our sovereignty; stop the implementation of programs aimed at promoting internal subversion and destabilization and compensate the Cuban people for all the human and economic damages caused by the United States policies.

As the Cuban Government recalls the issues that are still to be resolved between our two countries, it recognizes the decisions adopted so far by President Obama to remove Cuba from the list of States sponsors of international terrorism; to encourage the Congress of his country to lift the blockade and to begin taking steps to modify the implementation of aspects of this policy by making use of his executive powers.

Likewise, as part of the process towards the normalization of relations, it will be necessary to build the foundations of a kind of relations that have never before existed in the history between our countries, particularly since the military intervention of the United States, 117 years ago, during the independence war that Cuba waged for almost three decades against the Spanish colonialism.

These relations should be based on the absolute respect for our independence and sovereignty; the inalienable right of every State to choose its political, economic, social and cultural system, without any form of interference; and sovereign equality and reciprocity, which are principles of International Law that can not be relinquished.

The Government of Cuba reiterates its willingness to maintain a respectful dialogue with the Government of the United States and develop civilized coexistence relations, based on the respect for the differences that exist between both governments and cooperation in areas of mutual benefit.

Cuba shall continue to be involved in the process to update its economic and social model in order to build a prosperous and sustainable socialism, to move towards the development of the country and to consolidate the achievements of the Revolution.