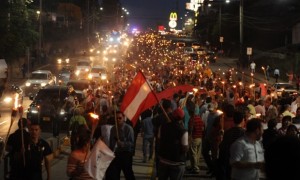 Protest in Tegucigalpa, Honduras, on May 29.

Thousands of demonstrators in Honduras and Guatemala are protesting their respective governments over corruption scandals involving the misappropriation of public funds.

Both waves of protests, which began several weeks ago, are demanding the immediate resignation of right-wing presidents Juan Orlando Hernández of Honduras and Otto Pérez Molina of Guatemala. The Central American heads of state have been linked to bribery rings involving their respective country’s social security programs and private corporations, among other acts of ­corruption.

Although each of these uprisings has its own unique form, due to differences in the political actors involved, they are similar in content. The political actors exist within the same economic environment. Ultimately, the ongoing protests in Honduras and Guatemala are national struggles against political corruption, a phenomenon inherent in the global economic system of capitalism.

Private medical companies like Dimesa, based in the Honduran capital of Tegucigalpa, helped finance Hernández’s campaign using profits made from backroom deals with IHSS officials. Dimesa has held a contract with the IHSS since 2011. Social security officials knowingly approved the purchase of overpriced medical equipment and low-quality medicines in exchange for bribes.

Approximately $330 million were stolen from the IHSS, significant portions of which were siphoned into Hernández’s National Party campaign, Al Jazeera reported in a June 1 article. Additionally, thousands of Hondurans have died and are still dying as a result of the extraction of IHSS funds originally intended for medicine and equipment.

Protests in Guatemala were ignited by two major scandals. The first involved a multimillion-dollar customs fraud exposed by a United Nations report released in April. Guatemalan government officials were reported to have been accepting bribes in exchange for lower customs duties for private corporations. The second involved Guatemalan Social Security Institute (IGSS) officials who signed a $15 million contract for dialysis with a company that has no experience, the June 12 New York Times reported.

Social security officials in Guatemala, just like their counterparts in Honduras, are reported to have received millions of dollars in kickbacks. Protesters consider Molina involved in both acts of ­malfeasance.

Honduran prosecutors investigating the scandal have since meted out minor forms of justice. From the National Party, former IHSS director Mario Zelaya, Dimesa investor Shukri Kafie and National Congress Vice President Lena Gutiérrez have all been charged with corruption and public health crimes. National Congress President Mauricio Oliva, also a member of the National Party, is currently being investigated for his involvement.

Guatemalan prosecutors have done the same. Former Vice President Roxana Baldetti stepped down from her position in May at the request of the Attorney General’s office, following accusations of her involvement in the customs bribery scandal. Her former secretary, Juan Carlos Monzón Rojas, who ran the operation, has been formally charged and has been given fugitive status. Several other government officials have also been arrested in connection to the IGSS case.

Despite these meager concessions, the masses are continuing to rise up. Thousands of protesters in Honduras and Guatemala have taken to the streets daily to demand that their respective country’s president step down. Solidarity protests have also been organized in several other countries, including Mexico, the United States and Canada. Demonstrators are continuing to organize larger actions by the day as neither Hernández nor Molina have announced plans to resign.

Overall, the mass uprisings in Honduras and Guatemala must be understood as being similar in content. Although the corruption scandals that sparked the anti-government mobilizations involved different political figures and institutions, they both took place in countries deeply entrenched in the global economic system of capitalism. The expansion of profits for private interests is as central to capitalism as it is to the corruption scandals in Honduras and Guatemala.

Both Central American nations are under the control of right-wing political parties working in favor of the global ruling economic class, which seeks the expansion of profits at the expense of millions of people. The everyday super-exploitation of workers and farmers leads inevitably to corruption and bribes. It all boils down to profit.