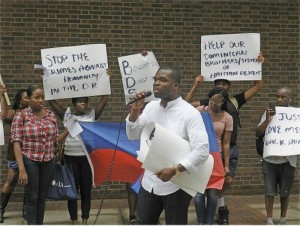 Some 500,000 undocumented immigrants in the Dominican Republic were under threat of removal, beginning the middle of June. Some estimates put the number as high as 750,000.

The Dominican Republic is one of the more prosperous states in the Caribbean, officially classified by the World Bank as upper-middle income. Haiti, which shares the island of Hispaniola with the DR, is classified as low income. Most of the undocumented in the DR come from Haiti.

The DR’s Specialized Border Security Corps has been trained and financed by the U.S. Border Patrol as part of the so-called global war on terror. (tomdispatch.com, Nov. 19, 2013)

The undocumented Haitian immigrants can be divided into two categories. Between 200,000 and 285,000 of them are Haitian Dominicans, born in the DR to Haitian parents or with Haitian grandparents, who had Dominican citizenship until a court ruling in 2013 declared they were stateless. The rest are workers born in Haiti who came to the DR to toil as cane cutters, construction workers, nannies, restaurant workers and other occupations. Many, but not all, are undocumented.

The outcry, both international and domestic, over declaring hundreds of thousands of Dominicans stateless was so great that the government came up with a procedure that would allow stateless individuals to become Dominican citizens. But the procedure was so complicated and arduous that only 25 percent of those at risk even attempted it. Only 9,000 or so managed to fill out the required forms. And only 300 permits were issued by the deadline of June 15. (AlJazeera, June 17)

Dominican President Danilo Medina claims that his administration doesn’t intend to engage in mass deportations. However, officials have said that after 48 hours’ notice, undocumented Haitians can be deported.

Some journalists speculate that deportations will pick up next year when the DR will be holding elections. Such “ethnic cleansing” has historically been popular among right-wing Dominican politicians.

In both Santo Domingo, the capital, and Santiago, the second-largest city, the cops used teargas and baton charges against people who were upset that the registration centers were closing, after waiting in long lines. These protests, caught on YouTube, didn’t draw much press attention but they did reflect a growing anger among those who are affected by the decision to render them stateless.

A February demonstration in Port-au-Prince, Haiti, of thousands of people raised this court decision on the status of Haitians in the DR.

There have also been protests in the United States. The group “Black Lives Matter in the Dominican Republic,” which has both Haitian and Dominican members, has been organizing in the New York City area. It has held two demonstrations, one in Times Square on June 15 and the other in the Bronx, near Fordham University, on June 20. A group of Haitians joined a press conference in Philadelphia protesting the Charleston massacre to explain their cause.

While the main reason for the Dominican ruling class to start expelling Haitians and Haitian Dominicans appears to be ideological, it is also undoubtedly intended to make the remaining Haitian workers fearful and tentative when it comes to pushing for higher wages and better working conditions.