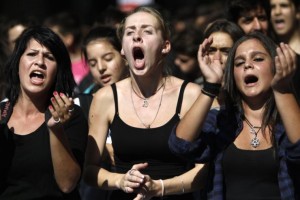 Since February, shortly after the electoral bloc Syriza won Greece’s national elections on an anti-austerity program, negotiations have been going back and forth between Syriza and the Troika over Greek government debt. The Troika refers to the International Monetary Fund, the European Central Bank and the European Commission.

In the latest developments, the Greek government skipped a payment to the IMF of 300 million euros due on June 5 and is scheduled to bundle it with subsequent payments on June 30. Also, the Communist Party of Greece has announced mass demonstrations in the upcoming weeks.

It is important to grasp the nature of the present negotiations and this struggle. It is a struggle over concessions. It is a struggle by the Syriza government to loosen the viselike grip of austerity that has brought untold suffering to the Greek workers and to ward off new attacks on pensions and wages.

Syriza: reformists trying to hold off an attack

Syriza is not trying to overthrow Greek capitalism. Perhaps a more revolutionary struggle could eventually emerge, but even the most revolutionary leadership must understand that at this point the main axis of the struggle is to ward off the blows of finance capital aimed at the workers and to arrest the most extreme measures of austerity. Slogans against Greek capitalism and for socialism must be raised for the sake of the future of the struggle. But at the same time all efforts must be made to strengthen the immediate fight against austerity.

It is also important to understand the forces in the struggle. Syriza is a left social-democratic formation with different currents in it. The leadership, represented by Prime Minister Alexis Tsipras, is not at all revolutionary. It is administering the Greek capitalist state, which is based on capitalist exploitation and wage slavery. Whatever these leaders say, they are in the position of upholding Greek capitalism. They could capitulate at any time because the leadership is locked into the capitalist framework of the European Union.

To be sure, the Syriza leadership is wavering and inconsistent, seeking to reconcile the irreconcilable — that is, to pay the debt but also get an “honorable settlement” that does not cross the red lines of pension protection, wage protection and general social protection for the workers.

Syriza, after initially repudiating the debt, now acknowledges the obligation to pay a large part of what is, in fact, a fraudulent debt imposed by means of financial extortion.

But having said all that, up to now the government, unlike previous governments, has been trying to hold off an attack.

It is important to understand the relationship of forces in the struggle. On one side is European finance capital, headed by German imperialism, along with the French, Dutch, Italian, Belgian and 17 other European imperialist powers.

On the other side is the Greek social-democratic government. The Greek government is not financially sovereign. It cannot issue its own currency under the rules of the eurozone. It cannot finance its way out of debt. It is totally dependent on funds from the ECB. And it is subject to harsh retaliation if it defaults.

The relationship of forces is clearly unfavorable to the Syriza government in the present crisis. The question of leaving the eurozone and issuing drachmas, the former Greek currency, is one possible scenario. It should be explored and preparations made for such an eventuality — if that becomes necessary.

At the negotiating table, the Syriza government has some leverage.

First, the euro bankers and the U.S. bankers fear that unknown crises could result from a Greek default. They fear a default could set off a chain of defaults, such as happened when Lehman Brothers was allowed to fail in 2008.

This is a passive advantage held by Athens — if they can hold out. But the major card has not been played. The factor that would give greater leverage to Greek negotiators is for the masses to be out on the streets, fighting militantly against austerity.

Given the extraordinary imbalance in the relationship of forces between the Greek government and the euro bankers, it is incumbent upon the government to mobilize the masses. A strong mass fightback would not only electrify the people and frighten the bankers, but could also set off solidarity struggles throughout Europe.

This is what the bankers in Berlin, Paris, Brussels and Washington fear most. The Political Secretariat of Syriza recently called for a national mobilization. But so far the Tsipras leadership has been nonstruggle. It does not match its defiant words in parliament and in public commentary with defiant deeds.

Several mass demonstrations took place during the early stages of the negotiations in February and March. But there has been no followup.

To appreciate the potential for mass resistance, it is worth remembering that Syriza was elected with around 33 percent of the vote. But after the victory, when Tsipras announced his plans — to fight austerity, demand a cut in the debt, rehire fired workers, protect pensions and collective bargaining rights, and subsidize the poor — his popularity in the polls shot up to close to 80 percent! This means that people who voted for the traditional bourgeois parties went over to Syriza in droves, at least in sentiment.

The history of recent Greek politics will give an appreciation of the impact on the population of Syriza’s efforts to combat austerity, however inconsistent they may be.

The global capitalist financial crisis struck in 2008. Since 2009, all the Greek governments have acted as vassals for the German, French, Dutch, U.S. and other bankers. These governments passed austerity budget after austerity budget. These vassals from the New Democracy Party and PASOK (so-called “socialists”) followed the dictates of the Troika.

It was the banks that were actually being bailed out, not the Greek masses. For example, between March 2010 and 2012, the Greek government made 23 payments to the Troika, amounting to 206.9 billion euros. At least 77 percent of that money went to the financial sector. (The International Attac network)

One Greek capitalist government after another paid hundreds of billions of euros to the bankers, who had caused the crisis in the first place and are now profiting from it. The Greek governments have been paying the bankers who loaned them bailout money with tax money taken from the workers and with money gained from cutbacks in pensions, wages, layoffs and privatizations of public facilities.

These governments have been a willing part of a vicious cycle. For five straight years, without letup, they attacked the working class in order to pay the rich. Half the population is now in poverty. Production is down over 25 percent. Unemployment is sky high. Hunger is everywhere. Greece is suffering from a Great Depression of its own. The Troika has been demanding draconian cuts — and each government has dutifully complied.

Syriza is the first government since the crisis began that has said “Enough!” and has tried to put a stop to the austerity measures. But it has few means to do this without the combative mobilization of the working class, the youth, the oppressed and all the victims of austerity.

It is a good omen that the Communist Party of Greece (KKE) has called a mass demonstration for June 11 and another on June 25. Through years of class struggle and the fight against fascism and reaction, the party has earned a great following among the workers. Since the negotiations began with the Troika in February, their absence up until now has been sorely missed.

Hopefully, the KKE will find a way to attract the broader masses and to win them over to an anti-capitalist perspective and to the struggle for socialism. This has been their program.

But this can best be done by directing their fire at the Troika as the main enemy and supporting the demand for lifting the austerity alongside raising the anti-capitalist struggle. It is urgent that the masses see this first and foremost as the KKE and the workers in the unions pushing against finance capital, fighting the new attacks and battling to lift the austerity.

If the Syriza leadership falters and yields to demands for austerity, then a revolutionary left that has been in the struggle against austerity will be in a credible position to step in and give ­leadership.

The Greek masses should not have to pay one more euro to the Troika. The onerous debt imposed by the financial vultures who prey on the working class should be thoroughly repudiated.

The Greek masses should be organized and mobilized to resist any and all retaliation and punitive measures imposed by the bankers. And they should be prepared to leave the eurozone — if it comes to that. The KKE, and left forces in and out of Syriza, can and must play a key role in that struggle. It is not too late to strike a hard blow at finance capital — at all the monied powers lauding it over the workers and all the downtrodden. Make the bankers pay!