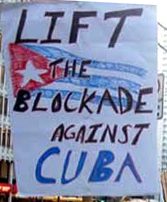 Ads and articles promoting travel to Cuba seem to be everywhere. Didn’t President Barack Obama announce a new relationship with Cuba on Dec. 17? Didn’t that mean the U.S. blockade of Cuba, a relic of the Cold War, was over?

Not so fast! The U.S. economic, commercial and financial blockade of Cuba is in full force and effect! And so are U.S. restrictions on U.S. residents traveling to and spending money in Cuba.

Respectful, equal and professional discussions between the U.S. and Cuba are working at formalizing diplomatic relations. This means having open and direct communication or a working relationship on issues of mutual interest, like hurricane warnings, and on international health emergencies, like the Ebola epidemic in Western Africa. Such discussions mean progress and are a victory for the Cuban Revolution, which is already a respected international partner around the globe.

But these limited discussions fall short of overcoming the severe, illegal and reprehensible web of laws and regulations that make up the blockade of Cuba. Washington’s small steps forward detract attention from its continued measures to undermine Cuba’s sovereign decision to build socialism. These measures include the blockade, which the U.N. General Assembly votes overwhelmingly to end each year.

On May 29, Secretary of State John Kerry officially signed papers removing Cuba from the U.S. “terrorism” list, a unilateral designation for states Washington is hostile to. Kerry’s papers included no apology, much less reparations for the harm done to Cuba by the terror campaigns launched from U.S. soil. Admitted terrorist and convicted bomber Luis Posada Carriles and others live free in Miami today, protected by U.S. imperialism.

Regarding travel to Cuba, U.S. residents still cannot buy an airline ticket from a U.S. airport to a Cuban airport without filling out an affidavit and pledging to keep all records of the trip available for government inspection for five years. Plus the trip cannot be a “vacation,” as vacations to Cuba are expressly prohibited by U.S. law.

Because of U.S. restrictions, the Cuban Interests Section in Washington, D.C., has had to operate without a bank account for more than a year. A Florida bank has finally agreed to accept its business. According to Cuba’s chief negotiator in the discussions with the U.S., even this step forward had to receive a U.S. license in compliance with U.S. blockade regulations.

Although Obama announced on Dec. 17 that Mastercard and Visa issued by U.S. banks could now be used in Cuba, the fine print still leaves the decision to the issuing bank based on blockade restrictions.

Cuba is not our enemy

Signed in September 2014, Obama’s Presidential Determination letter renewed sanctions on Cuba for another year, under the 1917 Trading with the Enemies Act. Without further action it will expire Sept. 14, 2015, and with it authorization for the Treasury Department’s Cuban Asset Control Regulations.

Reactionary U.S. representatives have attached amendments to transportation and appropriations legislation in the U.S. House in an attempt to reverse some of the measures Obama took to restore diplomatic relations with and liberalize travel restrictions regarding Cuba. The president may still have to veto these if they are passed. Why not just repeal the Helms-Burton Act — signed by Democratic President Bill Clinton in 1996 — which codified the blockade into law?

The Venceremos Brigade and IFCO/Pastors for Peace, which over decades have challenged all regulations by traveling to Cuba, demonstrate that Cuba is not our enemy. This summer these groups once again assert their right to freely travel and associate with the Cuban people without an affidavit, a license or a pledge to abide by the Treasury Department’s Office of Foreign Asset Control requirements.

Obama can do more

But Obama himself has not done everything he has the power to do. In a Feb. 12 Granma interview, Josefina Vidal, director general of the U.S. division of Cuba’s Ministry of Foreign Relations, said, “The blockade has not ended. … The president of the United States has options, I would say unlimited, to gut the blockade of its fundamental content. According to the attorneys who are advising us on this issue — because it is a question which has its complexities from a legal standpoint – there are only a few questions which the president cannot modify, because they are prohibited by law. …

“Tourism in Cuba is prohibited by law [and] commerce with Cuba by subsidiaries of U.S. companies in other countries. …

“Obama could tomorrow, for example, using his prerogatives, permit a U.S. company to do business with Cuba, trade in both directions, both export and import; … allow other non-agricultural products to be sold to Cuba on credit; … permit, for example, that products from other countries, manufactured with Cuban raw materials, be imported to the United States.

“It cannot be expected that in order to improve relations with the United States, or to advance in this long, complex process toward normalization which we have before us, that Cuba is going to negotiate questions of an internal nature, in exchange for a policy change on the part of the United States, when [the U.S. itself recognizes] that it has failed. Nor are we going to negotiate questions of an internal nature, of Cuban sovereignty, in exchange for the lifting of the blockade.”

Read the full Granma interview at tinyurl.com/p2xorhv. To contact the Venceremos Brigade, visit VenceremosBrigade.net; for IFCO/­Pastors for Peace, visit IFCOnews.org.