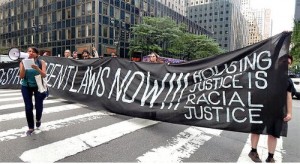 “We are tired of being displaced, extorted, harassed and ignored. We will continue to bring our grievances to the doorsteps of the powers-that-be until we are heard. New York City is facing a massive housing crisis, and the stakes are now higher than ever. On June 15, NYC’s rent regulation laws are set to expire,” stated protest organizers led by Brooklyn’s Crown Heights Tenants Union.

Several TV stations and newspaper reporters rushed to cover this while the police came much later. Connecting the need for affordable housing with New York’s long history of racist housing policies, the flier mentioned landlords’ history of redlining policies and how now the developers seek to cash in on gentrification, as they deny tenants their rights in an attempt to evict them.

NYC’s vacancy decontrol provisions eliminated 300,000 rent-regulated apart­ments where the majority of tenants are working class and people of color. The protesters’ statement offered: “This is why, as low income communities of color, we are taking matters into our own hands. With the recent upsurge of the Black Lives Matter movement, we have seen that the only way policymakers listen to disenfranchised people is when we take to the streets and disrupt business as usual. Cuomo has the power to change rent laws by June 15th in favor of low and moderate income New Yorkers.”