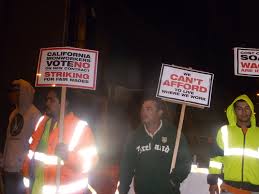 Ironworkers on strike in San Francisco

San Francisco ironworkers, who do very dangerous but essential work on huge construction projects, walked off the job on at least two sites on Sept. 10 and Sept. 11 to demand a re-vote on a concessions contract. A major issue that prompted the wildcat was no translations of the contract into Spanish or Chinese. Some 60 percent of the workers speak Spanish.

The workers are also demanding a cost-of-living wage because they continue to make about what they earned in 2005. “No on new contract, strike for fair wages” read the main banner. Picket signs read “Cost of living soars, wages are ignored” and “We can’t afford to live where we work.” One worker, a member of Ironworks Local 377, told the Labor Video Project that San Francisco has the highest cost of living in the world, but ironworkers in New York City make twice what workers in San Francisco make. For more details about the wildcat, view videos on youtube.com/laborvideo, Sept. 11 and Sept. 12.

Just in time for Labor Day, federal appeals courts in California and Oregon ruled that FedEx workers in those states are employees, not contractors. The judge in San Francisco noted that the contract the workers must sign “gives FedEx a broad right to control the manner in which the drivers perform their work.” This includes specifying the uniforms they wear, their personal grooming and the vehicles they drive, including the dimensions of shelving and paint color. Though the company does not dictate working hours, it organizes the drivers’ workloads so they work between 9 1/2 and 11 hours a day and tells them what packages to deliver on what days and at what times.

“This ruling will have seismic impact on this industry and the lives of FedEx Ground drivers in California,” said Beth Ross, the drivers’ attorney there. (SFgate.com, Aug. 28) For instance, now drivers will be able to sue for overtime pay, employer contributions to Social Security and Medicare, unemployment benefits, sick pay, family leave and workers’ compensation. The ruling affects 2,300 full-time drivers who worked for FedEx between 2000 and 2007 in California and 360 in Oregon. FedEx is appealing the rulings.

These decisions, along with a similar ruling about McDonald’s workers on July 29 by the National Labor Relations Board, could — should — have wide ramifications in industries that deliberately hire contractors to “employ” their workers. For instance, workers who drive trucks loaded with Walmart goods from California ports to inland warehouses have been fighting for years to be categorized as Walmart employees. Workers, often immigrants, who are contracted to provide janitorial work, package delivery, home-care services, construction and even some professional services like writing are deliberately cheated out of a living wage and employee protections while 1% owners revel in their stolen wealth and class privilege.

According to the Leonard Carder law firm where Ross works, she is pursuing a national suit against FedEx.

A California law granting 6.5 million low-wage workers, or 39 percent of the state’s workforce, paid sick days was signed into law on Sept. 10; it will go into effect July 1, 2015. Home-care workers, however, were excluded. But unions vowed to continue the fight until they are also covered. Similar policies were passed covering Connecticut workers in 2011 and workers in New York City earlier this year. However, unlike the earlier laws, this one will apply to businesses large and small. (aflcio.blog.org, Sept. 11)

A large crowd at the Minnesota AFL-CIO Labor Pavilion at the Minnesota State Fair applauded Aug. 26 when it was announced that the 26,000 home-care workers in the state will now be represented by SEIU Healthcare Minnesota. To gain the right to join a union, the workers, predominantly women, many of whom are women of color and/or immigrants, had to first change state laws and then fight off court challenges bankrolled by the National Right to Work Committee. “With our collective voice, we will be stronger in our fight for improvements for both workers and the people we serve,” said Rosemary Van Vickle, a home-care worker from Crosby. Key issues for the workers are better pay and benefits and more access to training, with improved quality of care for clients. (workdayminnesota.org, Aug. 26)