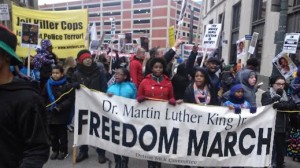 Police agencies in the United States are not moderating their brutal and murderous actions against African Americans and other oppressed peoples. Rebellions in Ferguson, Mo., and Baltimore have shed light on the killing and injuring of hundreds of people every month.

In response to the killings in Ferguson and Baltimore, along with the killing of 12-year-old Tamir Rice in Cleveland, Tony Robinson in Madison, Wis., Walter Scott in North Charleston, S.C., and many others, a wave of demonstrations has swept the U.S. These protest actions, including civil disobedience, have been covered widely through print, audio and television networks as well as social media.

Live streaming and posting of videos of mass unrest illustrate broad interest in the developing struggles. Elected officials are forced to pay lip service to issues involving mass incarceration and the militarization of the police.

Nothing has fundamentally changed, however, as it relates to the repressive character of the state. Policy reforms aimed at creating employment, educational opportunities and housing guarantees are nonexistent.

A recent study conducted by a leading British newspaper indicates the magnitude of the problem. The disparate treatment of African Americans when confronted by the police cannot be dismissed as coincidental.

“Black Americans are more than twice as likely to be unarmed when killed during encounters with police as white people, according to a Guardian investigation which found 102 of 464 people killed so far this year in incidents with law enforcement officers were not carrying weapons. An analysis of public records, local news reports and Guardian reporting found that 32% of Black people killed by police in 2015 were unarmed, as were 25% of … [Latino/a] people, compared with 15% of white people killed.“ (June 1)

Many unarmed African Americans are killed as police identify any possible weapon as a threat. The police shooting of Tamir Rice was “justified” because the cops said they thought the youth had a real hand gun.

The two African Americans killed in Cleveland in 2012 after their car was pursued by police were also killed unjustifiably because cops erroneously believed they were armed. People have been gunned down because police say they allegedly reached for a weapon or possessed a knife or hammer.

Even so-called nonlethal law enforcement tools have been deadly in numerous encounters between the cops and the people.

The same Guardian article notes deaths from “police use of a Taser, deaths caused by police vehicles and deaths following altercations in police custody, as well as those killed when officers open fire. They reveal that 29% of those killed by police, or 135 people, were Black. Sixty-seven, or 14%, were [Latino/a] and 234, or 50%, were white.”

These killings of people from oppressed nations “illustrate how disproportionately Black Americans, who make up just 13% of the country’s total population, according to census data, are killed by police. Of the 464 people counted by the Guardian, an overwhelming majority — 95% — were male, with just 5% female.”

In Detroit three African-American men have died or been killed in the custody of police since late March. None of the officers has been indicted in these deaths.

Anthony Clark, 24, died after being handcuffed outside his car on the southwest side of the city on March 30.

Spokespeople for the police department said he was pulled over because of erratic driving. Clark’s father reported his son suffered acute respiratory problems and had been placed on a breathing machine on several occasions.

The older Clark said the alleged erratic driving was caused by his son’s illness. Clark was in handcuffs when he collapsed. He told police he could not breathe and was allegedly given his asthma rescue inhaler, which didn’t work. Clark died in police custody.

On April 27, Terrance Kellom, 20, was fatally shot 10 times inside his home during a raid by a multijurisdictional task force consisting of local and federal officers. An Immigration and Customs Enforcement agent Michael Quinn said Kellom came toward him with a hammer, necessitating the shooting.

Kevin Kellom, Terrance’s father, said that his son was never in hiding from authorities and that police claimed they had a search warrant to enter the family home. Kellom said the search warrant only surfaced three hours after his son was shot to death by the ICE agent.

Quinn is a former Detroit police officer with a troubled record. In 2008 he was charged with felonious assault after he was accused of holding a loaded police revolver to his spouse’s head, threatening to shoot her.

While serving 12 years with the Detroit police, Quinn was also sued after he witnessed and participated in an act of brutality by his then partner Eugene Brown, who was involved in numerous police killings of civilians and assaults during the 1990s. Despite this controversial past, Quinn was still hired by ICE, where he has served for seven years.

No charges have been filed against Quinn or the other officers at the scene of Kellom’s killing. Demonstrations occurred in the immediate aftermath of the police action.

On May 23, Caso Jackson, 25, was killed in a flurry of police bullets after he jumped off a porch at his former home in northwest Detroit. News reports said Jackson allegedly held his estranged spouse and children hostage for several hours.

These police actions reinforce the systematic attacks on residents of Detroit through foreclosures, evictions and utility and water shutoffs. The overall austerity and repressive atmosphere in the city create a sense of siege felt by many youth.

The right to self-determination and bourgeois democracy is becoming more of an illusion in the U.S., particularly in urban areas where joblessness and poverty run rampant.