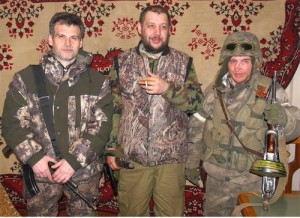 Workers World spoke with Alexey Markov (military callsign “Good”), political commissar of the Volunteer Communist Detachment (RCD) of the Ghost Brigade in the Lugansk People’s Republic. The RCD’s military commander is Pyotr Biryukov (callsign “Arkadich”). The Ghost Brigade is an anti-fascist militia defending people in the Donbass region from the war unleashed by the U.S.-backed junta in Ukraine, which has claimed thousands of lives in the past year.

This interview was conducted before the assassination of Ghost Brigade leader Alexei Mozgovoi on May 23.

Workers World: Please tell us about your earlier life.

Alexey Markov: I was born and raised in the city of Omsk, Western Siberia. At age 15, I moved to Novosibirsk, to a physico-mathematical boarding school. From 1990 to 1995, I studied at the Novosibirsk State University, Department of Physics, specializing in elementary particles. Until recently, I worked as a programmer and system administrator, managing an IT department. In general, the most common life.

WW: As a young person, what was it like to live through the collapse of the Soviet Union?

AM: Very painful. I was a staunch communist from childhood and clearly saw that my homeland was being destroyed for the sake of the personal enrichment of a handful of unscrupulous politicians and officials.

For several years, I thought that the whole country had gone mad — people rushed so happily to break everything that previous generations had built. When I said that it was done to the detriment of themselves, they just laughed. But soon it was no laughing matter. …

I still believe that the destruction of the USSR was a great loss for humanity and a major setback in its development.

WW: When did you come to the Donbass? How did you join the anti-fascist struggle there?

AM: From the beginning, I followed the developments in southeast Ukraine closely. It was obvious that the nationalist junta, which carried out the coup d’état in Kiev, would bet on Russophobia and anti-communism.

On May 10, 2014, I started collecting humanitarian and military supplies for the militias of Novorossiya. In September, I personally visited many cities in the southeast and talked with well-known commanders, after which Arkadich and I finally decided to set up a communist group.

WW: What are your responsibilities as political commissar of the detachment?

AM: As commissar for the detachment, I am responsible to work with the staff, conduct interviews with volunteers and perform the functions of deputy commander. I’m also responsible for public relations and relations with other communist organizations.

WW: Who are the communist volunteers? Are there international volunteers from outside Donbass, Ukraine and Russia?

AM: From the very beginning, our group included all sorts of people, even monarchists. In November and December, four volunteers from Spain fought with the detachment. Two other Spaniards — a doctor and a translator — worked with us from March to May. In April and May, we also had two Italian volunteers in the unit, and another Italian still works in the information department of the brigade.

WW: Tell us about the role of the communist volunteers in the liberation of the Debaltsevo region during the last Ukrainian military offensive.

AM: The soldiers of the communist volunteer detachment formed the vanguard of the combined brigade unit in the assault on Debaltsevo, and our commander Arkadich was appointed commander of all brigade forces in Debaltsevo. In fact, even units of other teams began to voluntarily submit to Arkadich, seeing him as the most experienced and competent commander.

WW: What are the challenges facing the Ghost Brigade and the communists in Lugansk today?

AM: The main problem is the lack of an influential communist political organization and disunity. Another big problem is that the local authorities in Lugansk want to prevent the growth of communist influence in the country. While communist fighters and troops of the Ghost Brigade fight at the front, the officials in Lugansk share portfolios and decide how the whole republic should live.

AM: I’m sure that the International Solidarity Forum was a great event for local residents. They saw firsthand that they are not alone in their fight against fascism. And the visitors from Europe and Latin America had a chance to see what is happening in Novorossiya. I think that such events should be held more often, because it’s only through joint efforts of all the people that we can stop resurgent fascism in Ukraine.

WW: Government officials in Washington are spending billions of dollars to provide weapons and financial support to Kiev. At the same time, austerity measures aimed at ordinary people here in the United States have increased. There is growing child poverty, low wages, and police abuse of Black and Brown people. What would you like workers in the U.S. to know about your struggle and the aspirations of the people in Donbass? What do we have in common?

AM: All workers under capitalism have a common enemy: the economic system that makes them the mechanism to extract profits. No normal person wants to kill another just because he speaks a different language. But war is very beneficial for capitalism, as a means of enrichment and as a means to retain their power.

I am sure that ordinary working people the U.S. have much in common with the workers in Novorossiya, and our attempt to build a new, more just society can be an example and inspiration for them. What’s coming is not a war between Russians and Ukrainians, but the war of ordinary people against the oligarchic junta.

WW: How can communists and anti-fascists in the West help your struggle?

AM: First of all, though the dissemination of factual information about events in Novorossiya, and political pressure on their governments. Without the support of Western Europe and the United States, the Kiev junta would not last long.

Secondly, the militia fighters need help with military equipment and medical supplies. War is very expensive, and people cannot resist for long, leaving behind family and work, without outside assistance.

And of course, with the moral support of all honest people around the world, you can send soldiers into battle who know they are fighting for a just cause.

More information on the Volunteer Communist Detachment can be found on the website redstaroverdonbass.blogspot.com.