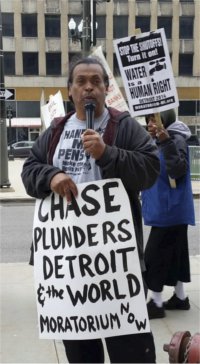 Protesters greeted banksters arriving at the JPMorgan Chase annual board of directors meeting on the morning of May 19 at downtown Detroit’s swanky Book Cadillac Hotel, where the gathering of thieves was held.

“Chase got bailed out! We got sold out!” and other angry chants took aim at Chase Bank and all the banks involved in the home foreclosure megacrisis. These foreclosures and evictions devastated Detroit’s neighborhoods. The crisis was caused by the deliberately racist, sexist, usurious subprime mortgages sold here and across the United States by Chase and other big financial institutions.

City of Detroit retirees had their pensions and medical insurance slashed to pay debt service to the banks as part of Detroit’s municipal bankruptcy.

The Moratorium NOW! Coalition, which called the demonstration, says Chase has made trillions of dollars worldwide, robbing cities and whole countries through its interest rate swap swindles.

In Detroit, Chase and three other banks were given $537 million out of the water department’s $1.1 billion bond deal earmarked for infrastructure repairs in 2011-2012. Moratorium NOW! has continually called the banks the real culprit behind the mass water shutoffs as well as the city’s mortgage and tax foreclosure crises.

The tax foreclosure of 20,000 to 25,000 occupied homes is scheduled for June 8. These seizures have been postponed twice due to community outrage and protests. An additional 25,000 water shutoffs are also slated.

Nasdaq, the second-largest stock exchange in the U.S., was the only media outlet to report on the demonstration. This voice of finance capital even quoted a Moratorium NOW! activist in their coverage of the Chase board meeting. The article was later reposted by the Wall Street Journal.

The “International Social Movements Gathering for Water and Affordable Housing” will be held in Detroit from May 29 to 31. The event will be hosted by the Michigan Welfare Rights Organization and the Detroit People’s Water Board. See socialmovementsgathering.info.

To get involved in the ongoing struggle against mass tax foreclosures and water shutoffs in Detroit, contact Moratorium NOW! at 313-680-5508 or visit moratorium-mi.org.