N.Y. cracks down on abuse of nail salon workers

A 2014 Department of Labor investigation revealed an epidemic of labor abuses throughout New York state’s nail salon industry. In a survey of 29 nail salons, investigators found 116 violations of state labor laws, including wage theft, unpaid overtime, paying for a job and unsafe exposure to noxious chemicals. On May 11, one year after the report’s release, New York Gov. Andrew Cuomo announced the creation of a multiagency, emergency task force to further investigate and enforce labor law violations in the state’s nail salons to “help ensure that no one — regardless of their citizenship status or what language they speak — is illegally victimized by their employer.” (governor.ny.gov, May 11)

In addition to closing and revoking the licenses of nail salons that do not comply, the task force will offer information sessions in six languages to educate the workers, predominantly immigrant women who speak Chinese, Korean or Spanish, to learn about their rights and how to anonymously report violations and unsafe conditions.

The report revealed that many manicurists have a variety of respiratory and skin ailments due to working with highly toxic chemicals that speed up drying time and prevent polish from chipping. Three of these substances are known to cause cancers such as Hodgkin’s disease, multiple myeloma and leukemia, and a variety of reproductive health hazards like miscarriage, abnormal fetal development and low-birth-weight babies.

Manicurists will now be required to wear gloves to reduce the risk of contracting skin conditions like fungal infections, warts and burns from handling chemicals. Ventilation will be required to reduce chemical fumes, and the state’s Health Department will conduct a study before setting up comprehensive safety standards.

With the American Postal Workers Union’s contract set to expire on May 20, workers and supporters called a National Day of Action on May 14 to demand “Good Postal Service! Good Jobs! Good Contract!” The postal workers seek to counter continuing efforts by management of the U.S. Postal Service to outsource union jobs to such notorious union busters and low-wage employers as Staples and Walmart. Workers also called on management to end cuts in service and keep post offices open longer in order to better serve customers. Workers and supporters rallied outside post offices in more than 131 locations throughout the U.S. to deliver the message: “I stand with Postal Workers.” To send an e-card to the Postmaster General with that slogan, visit apwu.org. (May 14) 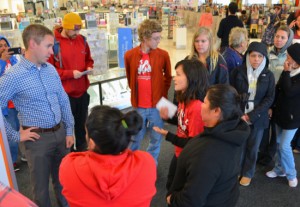 Kohl’s janitors in Minneapolis and St. Paul employed by the contractor Eurest/Kimco have reported widespread wage theft in amounts as high as 35 hours per week, according to a lawsuit filed in 2014. An Occupational Safety and Health Administration report found that Eurest/Kimco illegally subjected more than 1,700 workers nationwide to dangerous conditions over the last six years. (CTUL.net, May 12)

A four-month strike at Brooklyn’s Vegas Auto Spa came to a victorious end April 6 when the car wash workers agreed to a labor contract with wage increases, paid sick leave and personal days, and a $1,500-per-person bonus. The workers, organized by the Department Store Union and community groups, led a militant struggle that included filing a suit charging at least $600,000 in wage theft, marches and civil disobedience. ­RWDSU President Stuart Applebaum and two other union officials were among those arrested during worker-led direct actions against the car wash management on March 4. These workers are the ninth group of immigrant, self-described “carwasheros” to win a labor contract in New York City since the “Wash New York Campaign” was started three years ago. (washnewyork.org, March 17; New York Daily News, April 5)