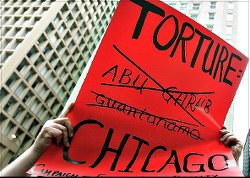 It is no coincidence that both Zuley and Burge learned torture in the service of U.S. imperialism, in Vietnam and Guantanamo. Torture is a feature of imperialist war against colonial resistance.

In 1990, Lathierial Boyd, 24, was asked by police to come to a facility in Chicago to help them investigate a murder. Boyd was confused, but, as he had been at his sister’s house on the other side of town the night of the murder watching a basketball game, he was not worried. He had a real estate business and was doing well.

He went to the infamous police facility called Homan Square not knowing that an untold number of people, mostly Black and Latino/a, had been “disappeared” into that building. He met Detective Richard Zuley and soon was shackled to a wall and the floor. Zuley went through Boyd’s nice apartment. Finding nothing, Zuley returned and told Boyd, “No n_____er should live like this.”(Guardian, Feb. 19)

Zuley had Boyd framed up by suppressing exonerating evidence and faking incriminating evidence. Boyd was finally freed in 2013, after 23 years in prison, on the grounds that he should not have been tried in the first place.

From Homan Square to Guantánamo

Angel Perez is the latest man to level similar accusations, telling the Guardian he was taken to Homan in October 2012 after being called to a meeting by cops who wanted him to touch base with a drug dealer they believed he knew. He declined to do so. Perez says the cops then put him in a cagelike room, sat on his chest, pushed their palms into his eyes and threatened his family — all to get him to participate in a $170 drug sting operation. The cops shackled him, taunted him and began running a metal object — Perez says an officer implied it was a gun — along his skin and then forced it into his rectum. “He jammed it in there and I started jerking and going all crazy.” (Newser.com, March 15)

These are just two of countless examples of people being lured into the CIA-like secret site in Chicago to be tortured and coerced into confessions and/or collaboration with the cops, often in frame-ups. At times, masked cops have swooped down on people in the streets and brought them to Homan Square with no charges and no official arrests.

If a person is not arrested, then he or she doesn’t have to be entered into the system, given a lawyer, have the family notified or have his or her rights read. The person just “disappears” into the police torture dungeon.

There is a strong political connection between police torture and imperialist war. Zuley was on the police payroll for 20 or more years until he took a leave to be part of the Joint Task Force for torture interrogations at Guantanamo prison.

Wrote the Feb. 18 Guardian: “Zuley’s tactics, which would be supercharged at Guantánamo when he took over the interrogation of a high-profile detainee as a U.S. Navy reserve lieutenant, included:

“Shackling suspects to police-precinct walls through eyebolts for hours on end; accusations of planting evidence when there was pressure for a high-profile murder conviction; threats of harm to family members of those under interrogation used as leverage; pressure on suspects to implicate themselves and others; threats of being subject to the death penalty if suspects did not confess.

“While ‘assigned’ to the U.S. military base at Guantánamo Bay … Zuley led one of the most brutal interrogations ever conducted at the prison. ‘I’ve never seen anyone stoop to these levels,’ a former Marine Corps prosecutor said.”

The torture inflicted by the Chicago police in Homan Square is not new. In the 1970s and 1980s police detective and commander Jon Burge ran routine torture operations that he had learned while in Vietnam. Burge framed up hundreds of people and extracted false confessions, often to capital crimes.

Burge headed a  band of police named the “Midnight Crew” between 1972 and 1991. They systematically tortured and abused Black men and women to coerce false confessions. Methods they used included suffocation, beatings, burnings, electric shock with cattle prods, electric wires attached to the genitals, and other methods that caused severe physical and mental injury.

The Chicago-based Innocence Project uncovered so many coerced confessions and got so many capital cases overturned that Gov. George Ryan in January 2003 commuted all 163 death sentences in the state, emptying death row in Illinois. Some of those pardoned were Burge’s victims.

Burge carried on for two decades before he was finally brought to court in 2010. He was sentenced to a light term for perjury and recently got out.

Chicago Mayor Rahm Emanuel was forced to accede to the demands of the Black and Latino/a communities for reparations to Burge’s victims. He began to speak about doing so only to placate the oppressed communities during the mayoral primary campaign, when he was running behind Jesus “Chuy” Garcia, who mounted a strong campaign and was winning support in the Black and Latino/a communities. Even though Emanuel was forced to apologize for the crimes of Burge, the Homan Square torture site has been up and running all through his mayoralty.

Imperialist war and torture at home

It is no coincidence that both Zuley and Burge learned torture in the service of U.S. imperialism: in Vietnam and Guantánamo. Torture is a feature of imperialist war against colonial resistance.

Torture was gradually outlawed in Europe and the U.S. in the 18th and 19th centuries. Torture had been practiced during the medieval Spanish Inquisition, by the European monarchs and lords, by Protestants against nonbelievers or by Puritan fanatics against women declared to be witches. Outlawing it was part of the bourgeois democratic revolution and the establishment of limits on the repressive powers of ruling-class authorities at that time.

In Kenya, Malaya and Aden and in other places where wars were waged against national resistance, the British put hundreds of thousands in concentration camps and carried out unspeakable torture.

The same applied to the French in the war against the Vietnamese liberation struggle and against the Algerian National Liberation Front. French torture became infamous around the world when a book by the French Algerian communist Henri Alleg, “The Question,” describing his own torture by the colonial authorities, sold worldwide in spite of being banned in France.

U.S. atrocities in the Philippines during the Philippine-American (also known as the Spanish-American) war of 1898-1902 shocked the world. U.S. tiger cages, massacres like My Lai and brutal torture methods in Vietnam were condemned by the world. In the same way, the struggle to crush the resistance in Afghanistan and Iraq drove the U.S. to use torture in secret sites, as well as the more widely publicized horrors at Abu Ghraib.

The important point is that torture methods devised by the imperialist “democracies” sooner or later come home to be used against the oppressed. And the racism that feeds both the war at home and the war abroad is intensified as those wars deepen and widen.

It is important to note regarding police killings of unarmed Black and Latino/a men and women that exposures, commissions, hearings, even punishment of cops and prison guards do not stop police brutality, torture, abuse of prisoners or mass incarceration.

Jon Burge and his “Midnight Riders” carried on their torture for two decades. Richard Zuley and his racist cohorts have been operating Homan Square for almost two decades. This takes place in plain view of the ruling class of Chicago, the Justice Department in Washington and the bankers and bosses who are the makers and shakers in capitalist society.

The New York Times, the Chicago Tribune, the Wall Street Journal and all the other luminaries of the big business media establishment never lifted a finger to run a really thorough exposé of the torturers. It took the Guardian newspaper of Britain, which also publicized the revelations by Edward Snowden, to persevere and uncover this ugly, racist torture den.

While the exposures of torture are a setback for the cops, they will stay in the business of killing, torture and brutality unless and until there is a mass movement that is powerful enough to shake the foundations of the capitalist system. The ruling class is used to endless exposures. The publicists of the exploiters have mastered the art of riding with a wave of condemnation until it dies down, and then they go back to business as usual.

Only a strong assault from below can shake the cops and their paymasters in the board rooms and push them back. In the final analysis, mass incarceration, police occupation and racist repression must be swept away, along with the capitalist system they serve.