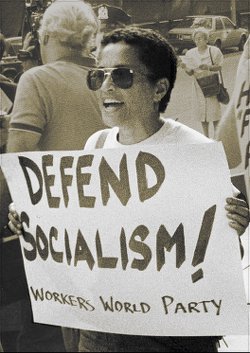 Pat Chin, a national committee member of Workers World Party and WW contributing editor, died on May 16, 2005, following a more-than-decade-long, heroic battle against breast cancer.  She was 56 years old. Born in Kingston, Jamaica, her heritage also included a Chinese grandfather. Chin moved to Brooklyn, N.Y., in the early 1960s.  Following the Stonewall Rebellion, she came out as a lesbian in the early 1970s and was a founding member of Salsa Soul Sisters, an organization of mainly Black, Latina and other lesbians of color.

Chin evolved as an anti-imperialist and internationalist, influenced by the Black and other national liberation struggles at home and abroad and the triumph of the Cuban socialist revolution. She traveled to Cuba several times, starting out as a member of the Venceremos Brigade.

The year following her first International Working Women’s Day event in 1986, she joined WWP. Never forgetting her Caribbean roots, this fearless Marxist fighter dedicated much of her party work to showing solidarity with the Haitian people’s fight for liberation against the remnants of French colonialism and U.S. neocolonialism.

Pat traveled to Haiti numerous times, starting in 1990, to meet with representatives of the Haitian mass organizations and the people. Pat also traveled to Yugoslavia in 2000 as part of a delegation to see firsthand the mass destruction caused by the U.S. bombing of that country the previous year. Pat served as an international judge on commissions to help expose U.S. crimes against the peoples of Haiti and Yugoslavia.  She documented her travels to Haiti and Yugoslavia with articles and photographs in WW.

Pat was a principled communist who not only studied the works of Karl Marx, V.I. Lenin, Amilcar Cabral, Kwame Nkrumah, Walter Rodney, Fidel Castro, Sam Marcy and many other revolutionary leaders but also put this theory into practice when it came to the contemporary struggles of the workers and the oppressed fighting capitalism and imperialism. She was a worker, a unionist, an advocate for women’s liberation, a brilliant writer and self-taught photographer, whose unique personality always lit up a room. She lived life to the fullest, including constantly sharing with others her love for the culture of the Caribbean peoples, whether it was with food or the arts.

If Pat were alive today, she would be standing shoulder to shoulder with the “Black Lives Matter” upsurge against police terror and state repression.

Pat was tragically taken from her WWP comrades, family, friends and the movement all too soon. But her fighting, revolutionary spirit will continue to inspire all who knew her and future revolutionaries. Pat Chin, ¡Presente!