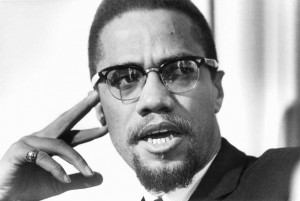 90 years after birth of Malcolm X

The rebellions in both Ferguson, Mo., and Baltimore in response to state terror — more commonly called police brutality — are the most tremendous examples of rising social upheaval in the United States. The Black Lives Matter movement that has sprung up in the wake of many high-profile police killings of Black men, women and children is a continuation of the Black struggle for liberation.

Like any political movement, it is growing, changing and learning. The rebellions, while part of the burgeoning political climate that is leading in a more radical direction, are of a spontaneous nature. Despite the calls for peace from more mainstream activists and bourgeois politicians, the rebellions will most likely spread to other cities, as the conditions of oppression, repression and economic warfare continue in oppressed communities.
The political development of the Black Lives Matter movement, as well as the masses who rebel — in this period and anytime — is rightly appraised in the context of objective and subjective factors.

Malcolm X gave a major speech at Columbia University, entitled “The Black Revolution and Its Effects upon the Negroes of the Western Hemisphere,” on Feb. 18 1965. He stressed, “It is incorrect to classify the revolt of the Negro as simply a racial conflict or black against white, or as a purely American problem. Rather, we are today seeing a global rebellion of the oppressed against the oppressor, the exploited against the exploiter.” Considering the fact that May 19 marks the 90th anniversary of Malcolm’s birth, these remarks made three days before his assassination are as true now as they were then.

Of course, the times and political climate were different then. The capitalist system was at a different point: It was still expanding in the 1960s, despite the ongoing social explosions in the imperialist centers and in the political and social revolutions in the oppressed world.

However, there is much to compare between that period and now regarding the international situation and, specifically, the movements within the internal colonies in the U.S. Change depends upon such conflict — social, political as well as cultural.

State terror is nothing new. Even when there are no social explosions, the terror of state forces, not merely the police, but the whole oppressive apparatus, has always loomed over the internally oppressed colonies in the U.S. — the Black, Indigenous, Mexican, Puerto Rican and other Latino/a peoples. It endangers immigrants who have been forced to migrate to the U.S. from oppressed countries — due to armed conflict led or backed by Washington or its proxies or because of imperialist economic warfare on their homelands.

In the Black, Brown and Indigenous communities or on Native reservations, this state terror has been the most acute. This is because of the doctrine of white supremacy, which is woven into the foundation of the capitalist system itself; it affects the cultural and belief systems and the politics and laws in the entire superstructure of capitalist and imperialist societies. To maintain their dominance, internally and externally, the oppressor nations find it necessary to maintain the division between white people and the darker people of the planet, who live in countries where many resources lie.

In the U.S., this racist division is needed so capitalists can drive down wages and line the pockets of owners of industries’ which thrive off the imprisonment of primarily oppressed people. Oppressed people are vilified to “justify” their criminalization and incarceration by the state.

While police killings are the focus and the catalyst of the rebellions and the Black Lives Matter movement, they are not new developments. It is only that modern technology facilitates the instantaneous travel of news and because cell phone video cameras are ubiquitous. However, the underlying oppressive conditions are what keep the ire of the Black community simmering.

These conditions did not spring from nowhere. Those that prevail in many Black communities are a continuation of policies set in motion by the processes of today’s capitalist system — with its revolutionizing of the productive forces and the resulting shrinking labor force, particularly impacting oppressed people. Governments at all levels deliberately neglect these communities. Paying back the banks at exorbitant interest rates is the priority of government, at the sake of people’s needs.

This is exemplified by the lack of jobs or the availability of only low-wage jobs with no benefits, the shrinking of the public sector and attacks on union rights, cutbacks in governmental programs, such as food stamps, unemployment benefits, housing subsidies, and the closing of schools and hospitals. Police terror reigns.

Baltimore and Ferguson are perfect examples of the changes happening in the U.S. for different reasons. The demographic shift of oppressed and poor people from the cities to the suburbs, such as Ferguson, and the subsequent growing poverty in this and other suburbs are due to gentrification, the lack of jobs, services and so on. St. Louis has been impacted by gentrification, the decline of manufacturing and port jobs, mass incarceration of the oppressed and so forth. Baltimore, too, is experiencing some of the same developments.

It should be noted that gentrification is not some peaceful process whereby developers buy up land and properties cheaply in areas long redlined where there is no social spending by governments — and where there are not even grocery stores! Before that can happen, laws and ordinances are enacted that criminalize the people in the community and a more active police presence increases, as brutalizations and killings terrorize the population into fleeing.

This situation has some similarities to the conditions in the U.S. South that led to the great migration to the North by the oppressed who left to escape terror, but also to get plentiful jobs. The difference today is that jobs are not really plentiful anywhere, and there is a huge surplus of labor among the oppressed, especially Black people.
Any movement needs contextualization of the objective reality. In this instance the system is in crisis and the financial markets are jittery. Political confusion and disorganization exist among forces in the leftist movement in the U.S.; it is not a united entity. There are volatile conditions outside the country with U.S.-led or -backed covert and overt wars. Imperialist countries compete for markets, while developing capitalist economies have to fight their way in.

The period of the 1960s and 1970s — the era of political figures like Malcolm X, one of the pre-eminent radicals in U.S. history — differed in many aspects from today. However, upheavals and rebellions like those in Ferguson and Baltimore will become more commonplace, and the Black Lives Matter movement will continue its growth and radicalization to meet the demands of the burgeoning political and social movements. It should be supported by all progressive forces in the U.S.