Report submitted for the Donbass International Solidarity Forum titled “Anti-fascism, Internationalism, Solidarity,” held on May 8, 2015, in the Lugansk People’s Republic. 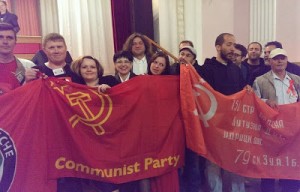 On behalf of the International Action Center in the United States, I want to congratulate the organizers and participants of the International Solidarity Forum on this historic event. We are proud to be part of this urgently needed step toward building a united international movement to fight against fascism, imperialism and war.

Just two decades after the terrible setback of the Soviet Union’s destruction, the heroic mass uprising of workers in Lugansk, Donetsk and southeastern Ukraine put the struggle for socialism back on the agenda. It has revived the anti-fascist and internationalist spirit of Soviet patriotism throughout the former republics of the USSR.

The armed resistance of the Donbass militias points the way forward toward a revolutionary movement of resistance to austerity, fascism and NATO expansion in Europe and worldwide.

In the U.S., we have faced an uphill battle to mobilize anti-war and progressive forces against U.S. intervention in Ukraine. Much of this is due to the overwhelming drumbeat of pro-Kiev, anti-Russia propaganda by the U.S. government and the capitalist media.

But it is also due to the long history of anti-communist, anti-Soviet and anti-Russian hysteria that has infected the U.S. workers’ and progressive movements since the Cold War witch hunt of the 1950s. It is a situation that requires us to develop creative ways to break down these prejudices and show how the growing fightback by workers and nationally oppressed communities in the U.S. is connected to the resistance of people in Donbass and throughout Ukraine.

Fortunately, in our country there is a large population of immigrant workers, especially from Latin America, but also from the Middle East, Africa and Asia-Pacific, who play an increasingly important role in the labor and anti-war movements, and who grasp the true role of U.S. imperialism on the global stage.

We have been able to bring the struggle of Donbass and the Ukrainian anti-fascists to a larger audience by uniting in joint actions with forces calling for solidarity with Venezuela, Syria, Palestine and other countries under attack by Washington and its allies, demanding full rights and legalization for all immigrant workers, and organizing for a $15 per hour minimum wage for the lowest-paid workers.

But the most important development in the U.S. in recent months is the upsurge of protest led by the African-American community and other nationally oppressed people against the epidemic of racist police murders. A recent study by the Malcolm X Grassroots Movement concluded that a Black person is killed in the U.S. every 28 hours by police, security guards or vigilantes.

The uprising began last summer in the small city of Ferguson, Missouri, after police killed teenager Michael Brown. It spread across the country, including to New York City, where I live, and where police terror against Black people is rampant.

Most recently, the city of Baltimore rose up after the police murder of Freddie Carlos Grey, whose spine was snapped and who was left to die in a police van. Hundreds of youth were arrested for protesting and the city has been placed under military occupation.

Our most important challenge in the coming weeks and months will be to find ways to create a bridge between this new, militant movement of the most oppressed against U.S. state-sponsored terror, with the resistance movements fighting fascism and imperialism abroad, including in Donbass and Ukraine.

It may seem that Lugansk and Baltimore are worlds apart. But they face a common enemy. The Pentagon sends military vehicles and advanced weaponry to police departments across the U.S. to use against oppressed communities and protesters, just as it deploys this hardware to Ukraine for the criminal war against Lugansk and Donetsk.

Billions of dollars in bailout money sent to prop up the Kiev junta is stolen from social programs to feed hungry families in the U.S., while the blockade forces Donbass families and pensioners to go hungry.

Children in Donbass are forced to hide in basements to escape shelling, while children in the U.S. are at risk of murder by the police in their own neighborhoods and even in their homes.

We are excited at the prospect of building an international solidarity movement that can undertake joint initiatives and actions. To the people of Donbass and Ukraine, we pledge our determination to fight against the imperialist monster that has brought so much pain and hardship to your land. And we have much to learn from your heroic example.

U.S.-NATO out of Ukraine! Hands off the Donbass republics!

Donbass and Ukraine will be free and socialist!

Greg Butterfield is an activist with the International Action Center in New York City. He is a contributing editor of Workers World newspaper and Workers.org.