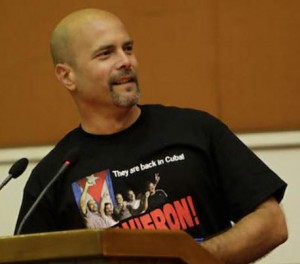 Havana — Last Dec. 17, U.S. President Barack Obama announced the release of the three remaining Cuban Five political prisoners — Gerardo Hernández, Ramón Labañino and Antonio Guerrero — after 16 years of unjust imprisonment in the U.S. for the “crime” of fighting terrorism directed against Cuba. The three returned home to join their two comrades, René González Sehwerert and Fernando González Llort, who had already been released after serving their full sentences.

This historic announcement was no gift from U.S. imperialism. It was a result of the Cuban people’s unwavering commitment and the support of solidarity movements around the world demanding the release of the Cuban Five. It signified a defeat for U.S. imperialism in its attempts to isolate and destroy the Cuban Revolution and represents an important victory for the anti-imperialist movement.

The Five Heroes, as they are known in Cuba, continue to defend the Cuban Revolution, meeting with people throughout their homeland and the world. Along with Cuban President Raúl Castro and Venezuelan President Nicolás Maduro, the five led this year’s massive May Day celebration in Havana. More than a million people filled the streets and marched through the Plaza of the Revolution, showing their joy at the return of the Five Heroes and their determination to continue constructing socialism in Cuba. More than 115 delegations from 17 countries also participated in this historic May Day march.

On May 2, the International Solidarity with Cuba Conference met in Havana and focused on the gains made during the past year as well as the challenges ahead. Unity in struggle and the strength of international solidarity had achieved two great victories: The return of the Five and the presence of Cuba at the Summit of the Americas. These two topics, unity and solidarity, were raised again and again throughout the discussions at the conference.

The battles ahead, which include putting an end to the criminal U.S. blockade, defending the Bolivarian Republic of Venezuela, fighting for the release of imprisoned Puerto Rican Independence fighter Oscar López Rivera and for the return of the U.S.-occupied Guantánamo naval base to Cuba, will require the utmost unity and solidarity.

Cuba is exemplary in demonstrating unity and solidarity, as can be seen by its more than 50 years of resistance to U.S. imperialism, during which it has sent doctors, teachers and material aid to every corner of the globe. Cuba is unflinching in its support for the liberation struggles in Palestine, Latin America and Africa. The worldwide anti-imperialist and revolutionary movements are greatly inspired by Cuba’s example.

Gerardo Hernández of the Cuban Five closed the International Solidarity Conference with the following comments, showing the importance of unity and solidarity. (Granma, May 4)

“Today,” he concluded, “you congratulate us, and you recognize that the resistance of the Five is no more than the resistance of the Cuban people, whom, for more than 50 years, imperialism has been unable to break. They have not isolated us; they themselves are the ones who have been isolated, since a socialist Cuba perseveres here, a people who are more determined than ever to struggle for its system. That is why we continue to trust in your support, your spirit of struggle and the solidarity of all of you brothers and sisters.”

Teitelbaum attended both the May Day celebration and the May 2 International Solidarity with Cuba Conference in Havana.