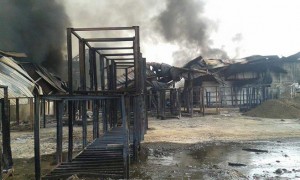 Smoke rises from Yemany Dairy and Beverage factory hit by a U.S.-backed Saudi airstrike outside Yemen’s Red Sea port of Hodaida on March 31, 2015.

Fighter aircraft from the Saudi-Gulf Cooperation Council coalition continued their massive bombing operations in Yemen during late April by attacking the international airport in the capital of Sanaa. The U.S.-backed Saudis present this struggle as a proxy war against Iran, with these latest attacks aimed at blocking Iranian aid to the Ansurallah movement (the Houthis), who have popular support in the large swaths of Yemen’s territory that they control.

Despite Washington and Tehran’s agreement over Iran’s nuclear energy program, the U.S. government has not lessened its hostility towards Iran. The Pentagon is providing fuel for the Saudi-GCC war planes and intelligence support, which has resulted in the massive destruction caused by the bombing that began on March 26. Driven out from its important military base in Yemen earlier this year, the Pentagon sees a victory in Yemen as central to U.S. imperialist interests in the region.

The April 28 British Guardian noted: “Iran’s state news agency IRNA said Saudi jets tried to force what it said was an aid plane back after it entered Yemeni airspace, but the pilots had ignored these ‘illegal warnings.’ The jets then bombed Sanaa airport as the plane was making an approach to land, forcing it to turn back, IRNA added.”

Although the Saudi-GCC coalition claims that its air campaign is restricted to military targets, the Human Rights Watch organization has documented attacks on civilians and residential areas, including attacks with U.S.-supplied cluster bombs. Strikes on Sanaa’s airport also prevented crucial medical supplies and relief aid from reaching those in need.

Yemeni-based al-Masirah television reported that an Iranian plane which turned around at Sanaa’s airport was slated to transport injured bombing victims to Iran for medical treatment. One aviation official said an airport in Hodeidah, Yemen’s fourth-largest city, had also been bombed, but still appeared operational.

Officials said aid flights would be diverted to Hodeidah pending large-scale repairs at Sanaa airport. Further attacks were carried out in many provinces’ residential areas. There is also intense fighting in the oil-producing Marib province east of Sanaa, in Taiz in central Yemen and in the southern port city of Aden.

Aden was the scene of fierce clashes on May 2 and 3 in the central Mualla and Khor Maksar districts near the commercial port. Reports have surfaced that Saudi-GCC Special Forces have landed in Aden and are fighting alongside the anti-Houthi militias known as the Southern Popular Resistance.

Reports that three Saudi troops were killed on Yemen’s border reveal that despite the intensive bombing by Riyadh and its allies, the Ansurallah fighters can still strike in the border areas. (Associated Press, May 1)

Al-Qaida elements, financed by Saudi Arabia, are also involved in the war against the Ansurallah movement.  Although Washington says that its “war on terrorism” is targeting al-Qaida of the Arabian Peninsula in Yemen, the U.S. now seems to be focusing its attack on the Ansurallah.

The bombing of Yemen has still not produced the results sought by Riyadh and its reactionary allies.

Egypt’s military-dominated government of President Abdel-Fattah al-Sisi announced on May 3 that it would continue intervening in Yemen in alliance with Saudi Arabia. Egypt’s state media have raised questions of whether this policy will end in disaster should high military casualties occur in Yemen. Egypt’s army has only been effective repressing Egyptian civilians, while in Yemen it would face an experienced guerrilla movement with popular backing.

On May 3, Reuters reported that the Egyptian government would extend its deployment of some of its military by three months to “continue participating in a Saudi-led coalition that has been launching air strikes in Yemen. Egypt … is a close ally of Saudi Arabia and has said it is participating in the alliance targeting Yemen’s Houthi rebels, who are allies of Iran.” Since the Egyptian military ousted Mohamed Morsi’s Muslim Brotherhood administration nearly two years ago, Egypt’s economic situation has deteriorated.

The Egyptian regime is largely dependent upon assistance from the U.S. and Saudi Arabia. Consequently, the stakes are high in the Washington-backed war in Yemen, where the defeat of the Saudi-allied forces would be a tremendous blow to imperialist objectives in the Middle East.