Taken from a talk given at a Workers World Party forum on April 17 in New York City. 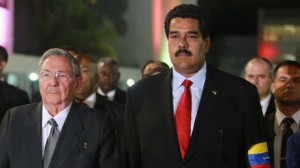 Raúl Castro and Nicolás Maduro at the Summit of the Americas.

U.S. imperialism got a good, old-fashioned shellacking at the VII Summit of the Americas and the People’s Summit in Panama from April 8 to 11.

But first, let’s look back to December 2014. U.S. President Barack Obama’s announcement that the U.S. would be normalizing relations with Cuba after decades of trying to overthrow the revolutionary government signaled a major setback for imperialism. Washington had failed and finally had to admit it.

As Argentine President Cristina Fernández said at the Summit, “[The only reason] Cuba is here, and we’re witnessing this meeting between two leaders, shaking hands and so on, is because Cuba fought for more than 60 years with unprecedented dignity.” Cuba’s presence at the Summit was a victory for the Cuban people and for all revolutionaries and anti-imperialists the world over.

On April 14, it was also announced that Obama has recommended to Congress that Cuba be taken off the U.S. terrorist list, a list that shouldn’t even exist seeing that the real terrorists are the ones making it.

Cuban President Raúl Castro’s speech at the Summit showed that Cuba has its eyes wide open when dealing with U.S. imperialism. Castro quoted from U.S. Assistant Secretary of State Lester Mallory’s 1960 memo: “The majority of Cubans support Castro. An effective political opposition does not exist; the only foreseeable means of alienating internal support [for the government] is through disenchantment and disaffection based on economic dissatisfaction and hardship; to weaken the economic life of Cuba, denying it money and supplies to decrease monetary and real wages; to bring about hunger, desperation and overthrow of government.”

Castro continued: “We have endured severe hardships. Actually, 77 percent of the Cuban people were born under the harshness of the blockade, but our patriotic convictions prevailed. Aggression increased resistance and accelerated the revolutionary process. Now, here we are with our heads up high and our dignity unblemished.”

Castro also defended Venezuela, called for the decolonization of Puerto Rico and said, “We should all multiply our assistance to Haiti and support a fair and deferential treatment of the Caribbean countries in their economic relations as well as reparations for damages brought on them by slavery and colonialism.”

After Obama announced the opening of an accord with Cuba, he wanted to make it clear to the right-wing forces within the U.S. ruling establishment that U.S. imperialism wasn’t actually going soft. In early March, he signed an executive order declaring that Venezuela posed an extraordinary threat to U.S. national security and ordering sanctions against seven Venezuelan officials. The decree was a complete miscalculation on his part, as it aroused an unprecedented uproar of protest throughout Latin America and the world. Every single Latin American and Caribbean country denounced the decree as heavy-handed and called for Obama to revoke it immediately.

Venezuela’s campaign to collect signatures worldwide to deliver to Obama at the Summit, resulted in 13 million signatures, 3 million from Cuba alone. U.S. Sub Secretary for Latin America Roberta Jacobson said she was “disappointed that there were not more countries to defend the sanctions.” On April 9, Obama ate his words, declaring that Venezuela poses no threat to the United States. He ended up having to meet with President Nicolás Maduro during the Summit.

In his speech, Maduro demanded the decree be revoked and made it clear that Venezuela is anti-imperialist. “Obama, if you do not recognize our 21st century revolution you will continue to fail.”

In parallel with the official summit, more than 3,500 delegates from workers’ organizations, trade unions, peasant organizations, Indigenous peoples, students, women, social and popular movements throughout Latin America and the Caribbean attended a People’s Summit in Panama. This summit’s final declaration stated its unconditional support for both the Cuban Revolution and the Bolivarian Revolution in Venezuela.

The declaration demanded the decolonization of Puerto Rico; freedom for Oscar López Rivera, who has served 33 years in U.S. prisons for fighting for his homeland’s independence; the immediate end of the occupation of Haiti; the return of the 43 students of Ayotzinapa in Mexico; and economic equality: a redistribution of wealth and an end to poverty. It also expressed solidarity with the peace process being held in Cuba between the Revolutionary Armed Forces of Colombia (FARC-EP) and the Colombian government.

President Maduro and President Rafael Correa of Ecuador were among the speakers at the People’s Summit. Correa stated, “We will no longer tolerate interferences, interventions or unilateral actions, nor will we ever be anyone’s backyard.”

The U.S. administration of Bill Clinton had initiated the “official” summits as part of the Organization of American States, with the first held in December 1994 in Miami to focus on the Free Trade Area of the Americas. The North American Free Trade Agreement (NAFTA) between the U.S., Canada and Mexico, which the Mexican people have been suffering from ever since, had just gone into effect earlier in 1994.

The Soviet Union had collapsed in 1991 and U.S. imperialism began to reclain and superexploit all the potential markets from which it had previously been barred. The OAS had excluded Cuba since the U.S. ordered the island’s expulsion in 1962. Only in 2009 did an OAS general assembly meeting reinstate Cuba. Because of the OAS’s bitter historical record against the revolutionary government, Cuba refused to return.

Some 20,000 people came from all over the world to protest at the third Summit, held in Quebec City in 2001, soon after the 1999 World Trade Organization meeting and the first mass anti-globalization protests in Seattle in 1999. In 2001, Cuba’s exclusion was protested, the U.S’s “War on Drugs” became a point of contention, and Hugo Chávez, who had been elected president of Venezuela in 1998, raised the idea of “participatory” as opposed to “representative” democracy.

In Mar del Plata, Argentina, in 2005, U.S. President George W. Bush got his own good, old-fashioned shellacking. The U.S. was still hell-bent on pushing through the FTAA. In response, the ALBA Express — a train headed by Evo Morales (then a Bolivian presidential candidate), Cuban singer Silvio Rodrigues and legendary Argentine soccer player Diego Maradona — came with thousands of protesters to the Summit to bury the FTAA. That’s exactly what happened as Brazil and Argentina refused to sign on to the FTAA.

In 2012 in Colombia, many government leaders, including host President Juan Manuel Santos Calderón, said there cannot be another summit without Cuba.

During the progress of the Summits of the Americas from 1994 to 2015, a strong alliance of leftist governments arose. Chávez finally broke Cuba’s isolation in the early 2000s. Politically and economically, Latin America and the Caribbean started to reject U.S. hegemony. In Part II, details of these changes will be highlighted.