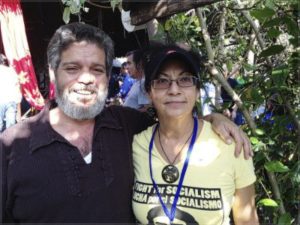 FARC-EP Commander Marco León Calarcá with Berta Joubert-Ceci in May 2014.

The peace process unfolding in Colombia through talks being held in Havana, Cuba, between the Revolutionary Armed Forces of Colombia (FARC-EP) and the Colombian government is crucial to the stability of the region. Any attempt to derail, block or even to proceed in haste will have negative consequences for all these countries, not only for the more than 48 million people who inhabit Colombia.

From April 11 through 17, thirty-two delegates from the United States travelled to Cuba to support this process. They had the unique opportunity to meet with several representatives of the FARC leadership. It was the first time that a U.S. delegation went to Cuba and publicly showed their support for these talks. It should be remembered that the FARC, along with the National Liberation Army of Colombia (ELN), are still on the U.S. State Department’s list of “foreign terrorist organizations.”

Cuba too, “the Country of Dignity,” had been on the State Department’s list of countries that sponsor terrorism until President Obama requested its removal. Yet, as of this date, Obama’s petition is still pending approval from the U.S. Congress.

The delegates had a glimpse of the enormous challenges and difficulties of this process, which has many enemies who want to keep war raging in Colombia. There is a confidentiality clause that forbids anyone participating actively as a silent witness in the talks, from disclosing sensitive information. Nevertheless, the delegation was able to get a clearer picture of its progress through meetings with the FARC peace delegation and FARC legal advisers, a Colombian government representative and the ambassadors of Cuba and Norway, countries which are guarantors for the talks.

It should be stressed that even though the talks are described as taking place between the government and the FARC, the reality is that the process embraces a vast number of other civil and social organizations from Colombia that have been an active part of it. In several regions of Colombia, the United Nations, the National University of Colombia and the Episcopal Conference have sponsored assemblies to gather feedback and proposals from the people.

The FARC also has a website where people can directly make suggestions. As a result, the proposals that the FARC submits to the process reflect the sentiments of the majority of Colombian people.

Women and the LGBT communities have been active participants.

A special aspect has been the inclusion of the victims of the conflict. According to a U.N. report, the majority of victims have been targets of the state and paramilitaries’ violent actions. Sixty victims travelled from Colombia to Cuba to ­testify.

As stated above, reactionary forces within Colombia want to suspend the talks and work actively to pursue this aim. Among them are big landowners and paramilitaries, including ex-President Álvaro Uribe.

One example of these obstacles is what happened in Cauca on April 14-15. During a confrontation between FARC guerrillas and the Colombian army, eleven soldiers and one guerrilla died. Immediately, and without any investigation, the government and right-wing forces accused the FARC of breaking the indefinite, unilateral ceasefire that the insurgent group had declared four months earlier. However, when the FARC announced this ceasefire, they made it clear that they will defend themselves if attacked.

As a retaliation for what he called “an attack of the FARC” on April 15, President Juan Manuel Santos announced that the army would resume the bombardments of FARC encampments that had been suspended for several weeks. Now, the region of Cauca is once again dangerous for the poor peasants and Indigenous communities who live in the area. Since Santos’ announcement, eight Indigenous men have already been killed by paramilitaries in the Cauca and Chocó regions.

This climate of constant war endangering the poorest communities is a threat to the peace process. For this reason, the FARC has demanded since the beginning a bilateral ceasefire, which the government has consistently refused. The insurgency has declared a unilateral ceasefire several times, but the government’s response has been an intensification of its aggression, causing more deaths and despair to the civilian population.

The demand for a bilateral ceasefire is echoed by the Broad Front for Peace, an organization that investigates the FARC unilateral ceasefire. In its IV report, dated April 22, the Front stated that there is “provocation and constant siege on the part of the government that takes advantage of a militarily armed actor that has decided to not attack them while they discuss peace.” They also reported that so far this year 19 human rights advocates have been killed.