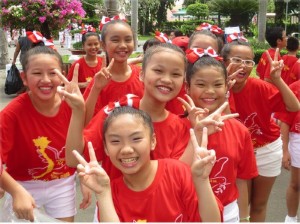 Ho Chi Minh City, known as Saigon before its liberation, is a fast-moving metropolis of more than 10 million people. Preparations for April 30, the 40th anniversary of the unification of north and south Vietnam and the decisive defeat of the U.S. invasion and occupation, can be seen all over.

Red flags of Vietnam and the Vietnamese Communist Party fly everywhere. Billboards announcing the anniversary abound. Hundreds of exuberant children gather in a downtown park rehearsing for commemoration ceremonies and posing for pictures.

However, no place in Vietnam more embodies the revolutionary heroism that made this victory possible than this small suburb of Ho Chi Minh City. The guerrilla tunnels of Cu Chi District testify to the determination of a people to win their independence against a foe far superior in technology but far inferior in motivation, morale, creativity and sheer determination to resist.

The tunnels have been preserved and turned into a national museum.

Cu Chi District’s proximity to Saigon, where the U.S. and its puppet forces were based, and to land and river routes to that city, made it strategically significant. It was the only sizable area in the south of Vietnam where troops could move easily, even during the monsoon season.

A guide explains that the tunnels were painstakingly dug by hoe, with the earth taken out in baskets. Their excavation began in the 1940s. Despite the immense difficulty of life in the tunnels, where air, food and water were scarce, and health problems — especially malaria — were common, the tunnels provided shelter from bombing attacks and a place to launch attacks on French and later U.S. soldiers and the South Vietnamese colonial army.

At the height of the U.S. war, the tunnels extended over 150 miles in length and several stories deep, starting about 40 miles north of Saigon and extending to the Cambodian border.

They grew to house entire underground villages with living quarters, kitchens with hidden smoke vents, factories for turning unexploded U.S. bombs into weapons, hospitals and bomb shelters, schools and fighting areas. There were even theaters and music halls to provide diversion for the fighters — mostly peasants from the area.

Some underground rooms have been recreated and a small section of the tunnels enlarged for tourists to enter.

The tunnels were used by the liberation forces to infiltrate Saigon with intelligence units, Communist Party cadre and sabotage teams. The 1968 Tet Offensive was prepared, and troops and supplies assembled, through the Cu Chi tunnels.

When the U.S. unknowingly set up a base in Cu Chi right over the tunnels, it found it was constantly attacked from within the base. A special team of U.S. soldiers sent into the tunnels to fight encountered hidden booby traps made from sharpened bamboo sticks covered with animal dung to cause infection. On exhibit are examples of these traps, with labels like “clipping armpit trap,” “door trap” and “folding chair trap.”

Next the U.S. sent specially trained dogs to locate the tunnels. The Vietnamese fighters began to wash with U.S. Army soap and wear captured U.S. Army uniforms to confuse the dogs with a “friendly smell.”

Most bombed area in history

The Pentagon’s response was barbaric. Cu Chi became the most shelled, gassed, bombed, devastated and defoliated area in the history of warfare. It was declared a “free-fire zone,” the target of random artillery fire, with pilots encouraged to drop unused bombs and napalm there before returning to base.

So many defoliants were dropped and the area was so heavily carpet-bombed that it became known by the U.S. command as the “white zone” for its absence of vegetation. But the tunnels still served as shelters and the liberation fighters still made their way through these tunnels to Saigon.

Today the “white zone” is once again green with fields of rubber plants and vegetables. The villages forced underground are now repopulated. They have been singled out as “heroic villages” and the district renamed “the Iron Land.”

According to Trip Advisor, the Cu Chi tunnels are the second most popular tourist destination in Vietnam. Of the thousands of comments and reviews online over the last few years, nearly 90 percent said their visit was a very good or excellent experience. The most popular tourist place in Ho Chi Minh City is the War Remnants Museum, formerly called the War Crimes Museum.

Comments of tourists from around the world found on Trip Advisor include:

“Tells the story of Vietnamese ingenuity, resilience and tenacity to defend their land against a superior force … how they turned bomb scraps into traps, tires into sandals and how they dug their tunnels, hide the air vents and camouflage it.”

“It is no wonder that the high-tech American army were out maneuvered.”

“It was their way to have surprise attacks and vanish unobserved. … Great people of a great country — what suffering they went through for their freedom.”

“The Vietnamese people lived in these small tunnels during day time, to come out only at night to do cultivation so that they are not attacked by the Americans during the war.”

“It was absolutely fascinating to see these tunnels and all the preserved evidence of the ingenuity, resilience and determination of a people … who, on our admittedly brief experience, seem to naturally be so gentle.”

“In these tunnels you can see why the Viet Cong won the war.”

With over a million visitors every year, the Cu Chi tunnels are living proof that, despite the many thousands killed in the war, the Vietnamese won not only freedom for their country but the hearts and minds of the workers and oppressed peoples of the world.