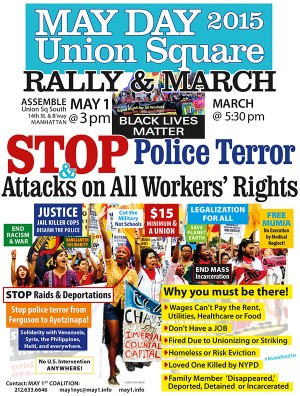 Next year will mark the 130th anniversary of the founding of May Day. Also known as International Workers Day, May Day is still commemorated more consciously abroad — with demonstrations, protests, strikes and other militant actions worldwide — than where it originated: in the United States.

On May 1, 1886, the American Federation of Labor organized militant actions demanding the right of all workers to an eight-hour workday. On that day, workers walked off their jobs and withheld their labor from being exploited by the bosses.

Martha Grevatt, a long-time Chrysler autoworker, wrote about the origins of May Day: “About a quarter of a million took part in many cities, but Chicago, with its militant, left-wing labor movement, had the largest demonstration. There, tens of thousands laid down their tools, and women and men poured into the streets. The demonstrations continued past May 1, and on May 3 police attacked and six workers were killed.

The next day a protest over the killings was held in Haymarket Square. A bomb was thrown, a policeman was killed, and a struggle broke out that left seven police and four workers dead. Eight workers’ leaders were convicted of murder, five of them sentenced to death. Four were hanged and one reportedly committed suicide. The other three were eventually pardoned.” (workers.org, March 23, 2012)  Those who were hung became known as the Haymarket Martyrs.

Fast forward to Philadelphia, May 13, 1985, when a powerful bomb was dropped from a State Police helicopter on the home of the MOVE family. The bomb created an incendiary fire that caused the horrific deaths of 11 MOVE members, including children, and the massive destruction of at least 60 houses in the majority Black, working-class neighborhood.

What do these two important events, occurring a century apart, have in common? They both expose the naked terror of the repressive state apparatus under capitalist class society, especially the role of the police.

In Haymarket Square, unarmed workers fighting for a larger piece of the value they create, in the form of livable wages and better working conditions, were fatally shot, followed by the unjust hanging of four of their compatriots. No police were arrested for these crimes.

In the case of the MOVE bombing, no police or other officials who sanctioned the bombing were arrested. The only surviving MOVE member of the bombing, Ramona Africa, spent seven years in prison. And why was MOVE targeted by the state? Their outspokenness on the issue of police brutality. The 30th anniversary of this government-sanctioned crime will be commemorated this year on May 13 in Philadelphia, along with demanding the release of the MOVE 9 members, who have been unjustly imprisoned since 1978.

Both of these examples prove in theory and practice a basic tenet of Marxism, discussed in Vladimir Lenin’s 1916 pamphlet “State and Revolution.” It explained that “the state is an organ of class rule, an organ for the oppression of one class by another; it is the creation of ‘order,’ which legalizes and perpetuates this oppression by moderating the conflict between classes.”

How does the state — which includes the armed bodies of men and women, the prisons, the courts, Immigration Customs Enforcement, the military, the media and more — manifest itself today? The most obvious example is the outright racist war of mass incarceration and police and vigilante terror against Black, Brown and Indigenous youth, who face no prospect of good-paying jobs, a decent education or a bright future under capitalism.

To its credit, the May 1 Coalition for Worker and Immigrant Rights is holding a major May Day rally and march in New York City’s Union Square, demanding: “From Ferguson to Ayotzinapa to NYC: No more police terror; we want jobs, $15 an hour and a union; end militarization of the border and police departments; legalization, not deportations; solidarity, not war.”

The capitalists are driven by their system to make more and more profits, not to meet human needs like jobs, health care, food, shelter, education and equality. This is the irreconcilable antagonism based on one class oppressing another that exists today. A socialist revolution on a global scale can begin the process of eradicating this antagonism in order to fulfill the needs of humanity.

The state, which exists under capitalism to serve the greed for profits of the corporations and banks, has proven time and time again that it is no friend of the workers and oppressed peoples, who are the vast majority on the planet but suffer in the billions from unmet human needs. This massive suffering has become exacerbated since the current capitalist economic crisis reared its ugly head in 2007.

Hasn’t the time come for the people to demand that the state be disarmed and eventually abolished, along with the rotten capitalist system that it serves?  In the spirit of International Workers Day, which calls for the empowerment of the entire working class, Workers World responds with a resounding: YES!