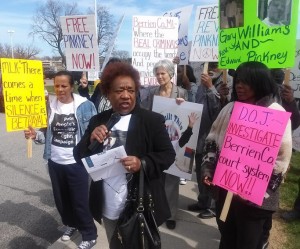 St. Joseph, Mich. — Another postconviction motions hearing took place on April 14 in St. Joseph, Mich., involving the conviction by an all-white jury late last year of the leading Black Civil Rights activist, the Rev. Edward Pinkney. People traveled from throughout Michigan and across the United States to support the Berrien County leader, who many feel has been denied justice by a corporate-controlled racist system in the southwest region of the state.

Rev. Pinkney, the leader of the Black Autonomy Network Community Organization, was in the courtroom in St. Joseph, the seat of Berrien County. Defense Attorney Tat Parish requested that handcuffs be removed from Pinkney. But Judge Sterling Schrock denied Parish’s request.

Judge Schrock continues to preside over the case where the BANCO leader was convicted on five felony counts of forgery in 2014 involving the purported changing of dates on recall petitions designed to remove Benton Harbor Mayor James Hightower.

Schrock said removing the handcuffs was up to the discretion of the Michigan Department of Corrections. But no MDOC officials had been in the courtroom since Pinkney was transported to the Berrien County jail the night before the hearing from the Lakeland Correctional Facility in Coldwater, where he is being held on a sentence of 30 to 120 months.

Two motions heard by Judge Schrock resulted in decisions that clearly violate the civil rights of Pinkney, a long-time county organizer. The first of the egregious decisions stemmed from a prosecution motion requesting financial restitution to Mayor Hightower due to purported harm to him by Pinkney during the recall campaign.

The judge ordered Pinkney to pay restitution to Mayor Hightower, who is up for re-election this year, in the amount of $1,736.17, saying the politician suffered economic and psychological damage. Hightower did not even bother to appear in court, and  prosecutor Michael Sepic, who submitted the motion, argued on his behalf.

Human Resources Director Susan Leach of Lakeland Hospital where Hightower is employed, in addition to his mayoral post, was subpoenaed by the defense to testify. She reported that Hightower is a salaried employee who did not lose any pay during the course of the recall campaign or during Pinkney’s trial where he testified. Nonetheless, the court ruled against Pinkney.

Motion for a new trial denied

The other motion by the defense requested a new trial based on the connection between juror Gail Freehland and the family of Berrien County Clerk Sharon Tyler, who was a key witness in the prosecution of Pinkney.

Relationships were clearly established through a series of witnesses called by the defense, constituting a clear conflict of interest.

Former juror Freehland testified that she did not have any social relationships with the Berrien County officials in question. Other witnesses called by the defense not only substantiated a connection but longtime friendships between the two parties in the county.

Tyler’s partner, Danny Gross, the former president of Three Oaks village where Freehland lives, was subpoenaed by the defense. He admitted that he had known Freehland “all her life,” but he was not aware if the former juror was acquainted with Tyler.

Gross owns a restaurant in the county and stated that Freehland had been with his business. He acknowledged that his daughters were around the same age as Freehland and that they knew each other.

Gross’ daughter Jody testified that she has “known Freehland for thirty years.” She  mentioned that she sees Freehland at least once or twice a year and that they were friends on Facebook.

Then Gross’ other daughter Gail testified that she and Freehland “attended the same school system,” although Freehland is younger. When asked if the two were friends, Grosse said “she considered her a friend.”

Prosecutor Sepic said the defense arguments seeking to draw connections and social relationships between these personalities involved in the trial were “preposterous” and no connections were established.

Speaking for the defense, Parish said that “there is every reason to suggest connections,” which were not disclosed during the jury screening process.

Judge Schrock agreed with Sepic and denied the motion for a new trial. He re-emphasized that Pinkney did not qualify for bond pending the outcome of his appeal, which is being filed to overturn his convictions on the felony charges.

During the course of the trial, no witnesses were brought forward by the prosecution who testified that they saw or believed that Pinkney changed the dates on five signatures on the recall petitions. Both the prosecution and the judge repeatedly stated that the evidence against Pinkney was “circumstantial.” However, no circumstantial evidence was ever presented.

Pinkney was then ushered out of the courtroom and transported back to the state prison. The next step will be to bring the case before the appeals court where many believe Pinkney has a good chance of prevailing.

After the hearing ended, dozens of people remained to hold a demonstration outside the court. Activists from Chicago, Flint, Detroit, Oak Park and other areas spoke out against what they saw as a travesty of justice.

Berrien County is dominated by the Whirlpool Corporation, a multibillion dollar firm. Pinkney and BANCO are staunch critics of the company, saying it is behind the prosecution and his imprisonment.

A demonstration against Whirlpool products sold at Lowe’s in Southfield, Mich., a Detroit suburb, is scheduled on April 24. Activists are attempting to expose the role of corporations in the politics of Berrien County and southwest Michigan.