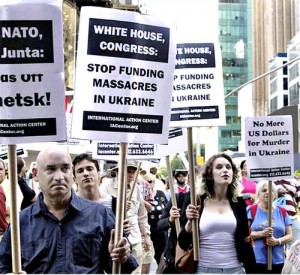 The twists and turns of President Barack Obama’s foreign policy, from Cuba to Iran to Ukraine, show the ability of the right wing to undermine the policies of centrist forces within the ruling-class political establishment. This is an expression of the expansionist, militarist forces that have deep roots within U.S. capitalism.

The Obama initiative to open up relations with Cuba is a classic example.

U.S. big business has grown increasingly frustrated with its isolation in Latin America. The Obama administration wants to implement the Trans-Pacific Partnership, the Latin American Free Trade Initiative and other trade agreements.

U.S. isolation is largely due to the popularity of the Cuban Revolution throughout Latin America. Cuba has held out against the economic blockade, invasion, subversion and CIA attempts at assassination since 1959. Washington has finally had to ask for talks on diplomatic relations.

But Obama, in order to prove to the right-wing, rabidly anti-Cuban forces in U.S. politics that he is not going “soft,” announced shortly after the opening to Cuba that Venezuela was a “national security threat” to the U.S. and imposed sanctions aimed at officials in the Maduro government.

This outrageous claim created a firestorm in Latin America just before Obama was scheduled to attend the Summit of the Americas meeting in Panama on April 10-11. It was a crude attempt to divide Cuba and Venezuela. But it backfired and threatened to undermine further the U.S. position in Latin America and the administration’s attempt to open up relations with Cuba, which was going to attend the meeting for the first time.

In fact, Obama had to withdraw this threatening, right-wing characterization of Venezuela in order to avoid a collapse of his entire attempt to improve U.S. relations with Latin America at the Panama meeting.

President Raul Castro of Cuba gave a scathing historical indictment of Washington in his speech to the summit. In it he stated: “Venezuela is not, and it cannot be, a threat to the national security of a superpower like the United States. We consider it a positive development that the U.S. President has admitted it.

“I should reaffirm our full, determined and loyal support to the sister Bolivarian Republic of Venezuela, to the legitimate government and civilian-military alliance headed by President Nicolás Maduro, and to the Bolivarian and Chavista people of that country struggling to pursue their own path.”

This is a clear case of the centrist Obama administration listening to the right wing and completely underestimating the anti-imperialist, pro-Venezuela, pro-Chavez and anti-Yankee sentiment of the Latin American masses.

Iranian leader pushes back against Kerry

In the case of Iran, the Obama administration, while holding nuclear negotiations, is trying to execute a diplomatic maneuver that it hopes will pull Iran toward the West and get it to abandon its support for anti-imperialist forces in the Middle East.

This maneuver is probably a complete pipedream, derived from wishful thinking on the part of the Obama administration. And it severely underestimates the powerful anti-imperialist, anti-U.S. sentiments that prevail in Iran.

After months of negotiations, the two sides had agreed upon a framework for future negotiations — called the Framework Agreement. But it is endangered by the desire of the Obama administration to placate the right wing.

In the aftermath of the announcement of the Framework Agreement, Secretary of State John Kerry prepared a so-called “fact sheet” designed to show the right wing how tough the U.S. had been in the talks. This fact sheet was not agreed to by the Iranian side and more or less represented Washington’s wish list.

It also said that there could be inspections of any “suspicious sites” outside the known nuclear supply chain — meaning that any claim of suspicion could be investigated, presumably including military sites.

These are just a few of Washington’s claims that the Iranians have denounced as “spin.”

The entire strategy received a heavy rebuff when Iranian Supreme Leader Ali Khamenei flatly stated that “unless all economic sanctions are totally lifted on the first day of the implementation of any deal,” there would be no agreement. He further stated that there would be no inspections of Iran’s military sites. (New York Times, April 9)

Khamenei also called U.S. public statements about the deal “flawed, incorrect and in contradiction to the facts.” And he expressed strong contempt for the U.S., describing it as “stubborn, deceitful, indecent and given to backstabbing.”

Khamenei represents the legacy of the Iranian Revolution of 1979, which was a vast social upheaval. The revolution ousted the murderous butcher Shah of Iran, who had been put in office in 1953 through a CIA coup d’etat. In the coup, the U.S. seized Iranian oil and set up military bases to guard the oil interests of Wall Street.

The Iranian people endured a quarter century of repression and torture under the U.S.-trained SAVAK, the Shah’s secret police. They waged two years of continuous struggle and suffered huge casualties before the Shah fled the throne in 1979.

The oil was then nationalized, U.S. bases were dismantled and the religious leaders set up the Islamic Republic, independent of and in opposition to U.S. and British imperialism, the two colonizers of Iran.

Washington has once again underestimated the anti-imperialist fervor of a large section of the Iranian masses, which is still alive and persists after decades of sanctions, military threat, sabotage and dirty tricks.

Now, in order to show toughness, the Obama administration has just announced the testing of a new “bunker buster” bomb, presumably capable of penetrating deep sites in Iran. In addition, it has announced that it will keep Iran from “arming the Houthis” in Yemen by helping Saudi Arabia bomb and invade the country.

Meanwhile, the Iranian government has not sent troops to invade any country. U.S. hypocrisy knows no limits.

In Ukraine, Washington and the European Union fostered a right-wing movement on the streets of Kiev and other cities from November 2013 to February 2014. The goal was to push Ukraine in an anti-Russian direction and link it to the European Economic Community.

In Maidan Square in Kiev, the capital of Ukraine, dozens of U.S. and European nongovernmental organizations fostered a movement that got Prime Minister Viktor Yanukovych to negotiate a compromise with the EU. Yanukovych agreed to hold elections in December 2014.

The minute the negotiations were over, the U.S. State Department, under the influence of neocon Assistant Secretary of State Victoria Nuland, organized fascist goon squads to invade the parliament, oust Yanukovych and set up a U.S. puppet regime. The U.S. even handpicked the new prime minister, Arseniy Yatsenyuk.

This fascist coup provoked a huge rebellion in the industrial heartland of eastern Ukraine. Separatist, anti-fascist movements developed. The people of Crimea voted to rejoin Russia. And an anti-fascist resistance war began.

The U.S. government is now backing a reactionary oligarchic regime in Kiev. This regime is mostly dependent on fascist forces for the little social and military support it has. The Ukrainian army is totally unreliable. The Kiev forces have been driven out of much of eastern Ukraine.

The Kiev government is totally bankrupt and has had to rely on an emergency loan from the International Monetary Fund of $18.5 billion — with no real way to pay it back except by taking money out of the hides of the Ukranian masses.

The U.S. government has sharpened tensions with Russia, and is now in the position of having to shore up the Ukraine regime militarily. European imperialists are trying to guide some kind of settlement to end the fighting and restore stability. But at the same time, the Pentagon is sending in forces to train the fascist dregs in the Ukrainian army. Also, the Pentagon and NATO have moved forces into the Baltic and East European client states.

The Obama administration, by allowing the right wing to take over Ukraine policy and carry out a coup, has wound up with another ongoing geostrategic, military crisis on its hands. It has possession of a bankrupt, discredited regime, dependent on right-wing and fascist forces. All its plans to penetrate Ukraine gradually, by subversion, have gone up in smoke.

This is another case of totally underestimating the anti-fascist, anti-imperialist sentiment of the Ukrainian masses. It was a total miscalculation based on placating the right-wing, militarist camp in the U.S. ruling-class political establishment.

The broad picture is that the ruling class as a whole has regarded the era since the collapse of the USSR and Eastern Europe in the early 1990s as one of reconquest of all that was lost to imperialism during the 20th century.

The right wing in the U.S. — the John McCains, Lindsay Grahams, Henry Kissingers and their ilk — represent the most aggressive and expansionist section of the ruling class, which is striving to attain total global dominance.

Centrists like Obama, who even slightly deviate from this agenda, are castigated and put under pressure and attack.

It is not that the Obama administration is trying to inaugurate a new era of peace. Not at all. But Obama recognizes some of the weaknesses of U.S. imperialism in Latin America, the Middle East, North Africa, etc., and is trying to shore up its position in places where it is weak, in order to regain the initiative for U.S. big business and the Pentagon.

Centrism always winds up deferring to the right wing in a crisis — even though the right wing is totally out of touch with the reality that the sentiment held by the majority of humanity is anti-imperialist.