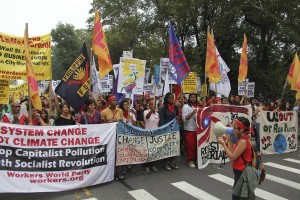 Until his veto of the Keystone XL pipeline on Feb. 24, President Barack Obama had kept the entire world unsure of his position. The issue of the KXL pipeline — the 1,700-mile-long project to be owned by energy monopoly TransCanada — had been seen as his chance to take a principled stand against climate change.

Yet, what is the real reason for Obama’s veto? What does such a pipeline mean for the future of our planet? And, what is the potential for the struggle against climate change?

Why was Keystone XL important?

The pitfalls of the KXL pipeline and the capitalists’ “Drill, baby, drill” drive will go down in history as threatening all life on earth for a quick buck. Energy, the world’s most valuable commodity and the cause of endless U.S. wars, is creating a political, economic and environmental crisis much deeper than one pipeline.

The primary reason environmentalists and progressives have argued against the KXL pipeline is that it would daily carry an extra 800,000 gallons of the world’s dirtiest oil from tar sands in Alberta, Canada, to Texas. The U.S. State Department admits that the production of this type of oil creates over 19 percent more greenhouse gases than regular oil.

This difference was expected to equal the amount of pollution that would be emitted if 51 million new cars were put on the road. The dirtier tar sands oil would then be refined and create toxic fumes, causing more asthma, birth defects and cancer in places like Houston, where the pipeline would end. (350.org)

The claimed selling point for the KXL was that it would supposedly create hundreds of thousands of jobs. Yet, in the draft Supplemental Environmental Impact Statement for the Keystone XL Project released in March 2013, the U.S. State Department estimated it would create just 35 permanent jobs.

The same study found that it would create 3,900 construction jobs for the year it would take to build the pipeline. Meanwhile, thousands of agricultural workers, along with many others, would risk losing their jobs to a likely oil spill or leak. Thus, in the final calculation, this pipeline would likely destroy jobs, while furthering the climate change crisis.

But the nightmare doesn’t stop there. The pipeline could also ship millions of gallons of natural gas from North Dakota’s Bakken shale fields. Natural gas produced by hydraulic fracturing, “fracking,” has boomed since 2000. Despite the lie that it is a “bridge” to more clean energy sources, the process of drilling, piping, compressing and burning natural gas as a whole is just as dirty and disastrous as coal, which is widely seen as the dirtiest energy. (“A Big Fracking Lie,” ­politico.com, Jan. 21, 2014)

Dr. James Hansen, formerly of NASA’s Goddard Institute for Space Studies, has become one of the pre-eminent ­climatologists-turned-activists leading the fight against KXL. He works with 350.org, which has organized worldwide demonstrations against it.

Hansen has called the pipeline, “Game over for the climate,” based on intensive research on the level of carbon in the atmosphere. He states, “If humanity wishes to preserve a planet similar to that on which civilization developed and to which life on Earth is adapted, paleoclimate evidence and ongoing climate change suggest that carbon dioxide will need to be reduced from [current levels] to at most 350 parts per million (ppm).” (“The Science,” 350.org)

Our atmosphere now contains about 400 parts per million of carbon dioxide, which is the highest level in millions of years. In the 1700s, when industrial capitalism was beginning, the level was about 275 ppm of carbon dioxide.

In 2011, the Carbon Tracker Initiative estimated the combined known deposits of oil, gas and coal in the world to be 2,795 gigatons of carbon. Yet, according to Naomi Klein’s book, “This Changes Everything: Capitalism vs. the Climate,” no more than 565 gigatons of these reserves can be burned between 2011 and 2049 if carbon dioxide is to be brought below 350 ppm of carbon in the atmosphere by 2050. This leaves the other 80 percent of oil, gas and coal unused.

To the capitalists, this means upwards of $27 trillion in lost revenue.

President Obama, like all politicians in the two big capitalist parties, is beholden to the billionaires who own energy companies. So why did he veto the KXL pipeline? His energy policy has hardly been environmentally friendly.

Part of the answer may come from the glut in the global production of energy; this has caused prices to drop.

Another aspect which the president and the big polluters are aware of is the global movement against climate change. Over the past four years, farmers, ranchers, Indigenous nations and many other activists have engaged in militant resistance to the KXL pipeline. Direct actions have had a major impact, including in 2011, when more than 1,200 people were arrested at the White House demanding President Obama exercise the veto.

Indeed, the climate movement is massive and global. In September 2014, close to half a million people marched in New York City in the People’s Climate March. The next day, thousands of activists “flooded Wall Street,” demanding the banks pay for the climate crisis they have caused. The demand, “System change, not climate change,” has been gaining traction, from New York City to La Paz, Bolivia.

The crisis of climate change presents a threat to humanity’s very existence. Climate change is impacting oppressed countries in the global South much more than in the imperialist centers.

The movement cannot stop with the small victory on the KXL pipeline. The potential of human beings as stewards — and not destroyers — of the earth must be harnessed. The only way to do this is to abolish the profit motive, to put the energy sector, the world’s most critical commodity, into the hands of the people. There must be workers’ control of the banks, industries and every major aspect of society to fight against the looming climate disaster — and to provide economic and social justice to the victims of capitalist climate change.

A revolutionary response would be to transform energy use away from oil, coal, natural gas and unsafe nuclear power as quickly as possible. None of these forms of energy has much of a future on this planet if humanity is to survive. Yet, can anyone imagine waiting for the market, controlled by monopolies, to transform away from oil? Not when they have $27 trillion to gain.

This is why revolution is mandatory. The people must have control in order to explore our options as rapidly as possible, especially with renewable forms of energy. A revolutionary perspective on climate change also raises the need for global reparations for oppressed countries whose economies have been decimated by imperialist development and its by-product, global climate change.