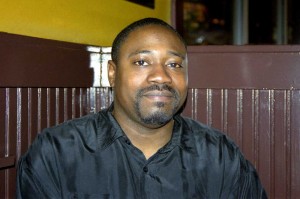 As the whole world knows, Walter Scott, a 50-year-old African American, was fatally shot in the back multiple times by a white police officer, Michael T. Slager, on April 4. The murder occurred in North Charleston, S.C., a city that is 47 percent Black but where four out of every five police officers are white. As Scott’s family so eloquently stated, the police used him as target practice.

The entire incident, from the time Slager stopped Scott for a “routine traffic stop” to when the cop shot Scott as he was fleeing in fear of his life, was caught on cell phone video.

Slager claimed that Scott took his Taser away from him, but the video clearly showed that Scott was unarmed and that Slager planted an object similar to a Taser next to Scott’s body. Slager was shown handcuffing Scott as he lay on the ground dying. Other police officers eventually arrived on the scene, but it is still a question whether any of them attempted to revive Scott.

After the police viewed the horrifying video, Slager was fired, arrested and then charged with first-degree murder. If convicted, he could face the death penalty or life in prison.

This is a very rare situation in the U.S.

Why? Because a police officer’s word is taken as “gospel” 99.9 percent of the time when any kind of police brutality is carried out — especially when that officer is white and the victim is a person of color, young or just a worker.

However, the Black Lives Matter movement, which was ignited by the police murder of 18-year-old Michael Brown last August in Ferguson, Mo., has raised an unprecedented level of consciousness about the naked, racist war of police terror on Black and Brown people, especially youth. But this war is not relegated only to youth of color, as shown by the videotaped chokehold police murder of 43-year-old Eric Garner in Staten Island, N.Y., and now the murder of Scott.

Even high-profile athletes, such as Thabo Sefolosha, a forward with the National Basketball Association’s Atlanta Hawks team, have been targeted by the police.  Sefolosha suffered a fractured right fibula and ligament damage when five members of the New York Police Department attacked him with their batons in the early morning of April 8. This police attack, which was condemned by Sefolosha April 14, was also captured on video. None of the officers has been charged or even put on desk duty as of this writing. The NBA is carrying out its own investigation. Sefolosha is an athlete of color whose father is a Black South African. Professional and collegiate athletes in many sports have expressed solidarity with the BLM movement.

Attempt to divide and conquer

As the April 15 national demonstrations demanding “$15 an hour and a union” approach, low-wage workers’ lives, particularly if they are women, youth and oppressed, are expendable under capitalism in the midst of the ongoing economic crisis caused by putting profits before human needs. This social reality — the absence of good-paying jobs with benefits — has intensified, creating an open season of police terror and mass incarceration.

The heroic rebellion in Ferguson last August, followed by BLM-led, shut-it-down coordinated actions, has clearly put the police on the defensive, and in general tarnished their phony image of being the “protectors” of the people. This is why all activists should expose the attempt by the police themselves and the capitalist media to divide this movement. They may admit that the killing of Scott was murder, but they call the killings of others, such as Brown and Garner, just “tragedies,” implying no culpability on the part of the police.

The police understand, along with the 1% — the ruling class whose interests the police protect — that there is a righteous, deepening mistrust of their role in society as a brutal, occupying force.

In an April 10 Washington Post opinion piece, “Think Walter Scott’s death is ‘another Ferguson’? Cops don’t,” written by a former Baltimore cop, the author says that police from around the country may view lethal force as murder when a person is fleeing, but police having “altercations” with civilians resulting in deaths or injuries are “tragedies,” not “criminal.”

This is a ridiculous argument — that the police have the right to use deadly force when all they have to say is they believed they were in a vulnerable situation. Explain this disgusting notion to the family of 12-year-old Tamir Rice, who was ruthlessly shot down by police in Cleveland last fall while holding a toy BB gun and then allowed to bleed to death. Or to the family of 23-year-old John Crawford III, who was fatally shot by police in an Ohio Walmart for holding a toy BB gun, just a few days before Michael Brown’s murder.

So in the eyes of the police, Scott’s killing was unjustified, while the majority of other killings by police are justified. This is a bold-face lie — to cover the fact that every 28 hours in this country a youth of color is murdered by the police or racist vigilantism. This reasoning should be viewed as an insidious and dangerous ploy to divide and weaken the BLM movement.

The police want to project Slager’s actions as an isolated incident: that Slager muddied the reputation of all police, unlike those cops who just make “bad mistakes” when confronted by victims like Brown and Garner who are carrying out “petty crimes.” Those so-called “mistakes” just so happen to snuff out people’s lives.

This raises the obvious question that if the murder of Scott had not been videotaped, would Slager ever have been fired and charged with murder?  Certainly, such a thing has never happened before.

The statistics speak for themselves. Another Washington Post article, “Thousands dead, few prosecuted” published April 12, reports that Bowling Green State University researchers have found that, since 2005, out of the thousands of cases of mostly unarmed people killed by the police, only 54 have been prosecuted.

The article states, “When prosecutors pressed charges, the Post analysis found, there were typically other factors that made the case exceptional, including: a victim shot in the back, a video recording of the incident, incriminating testimony from other officers or allegations of a coverup.  Forty-three cases involved at least one of these four factors. Nineteen cases involved at least two.”

These statistics are a condemnation of the entire injustice system of not only the police and prosecutors but also judges, juries, media — all part of the repressive state apparatus that is guided by white supremacist and anti-worker views.

The chorus of calls for disarming and even abolishing the police is growing, especially from community organizations like the People’s Power Assemblies, which are mobilizing for a major People’s Tribunal Against Police Terror and Structural Racism. There will be more than enough evidence from graphic videos exposing police killings and beatings as well as live testimony from surviving victims and family members to show that these demands are justified. Along with that must come solutions of how communities can be empowered to protect themselves from racist occupation and state repression.

Along with defending and helping the Black Lives Matter upsurge to grow, this tribunal can also assist in bringing some justice for ALL the Walter Scotts in this racist society.