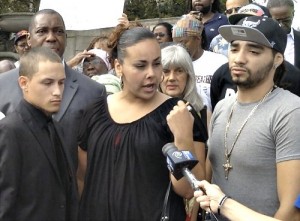 New York — Ramsey Orta, whose cellphone video of killer cop Daniel Pantaleo choking to death unarmed Eric Garner sparked a movement against racist police murders, was finally released on bail on April 10 after sitting in a cell on Rikers Island for over two months.

On July 17 last year, Orta put his safety and future on the line to expose this brutal killing by Pantaleo, backed up by a wolf pack of six other cops. Pantaleo and his accomplices went scot-free, leaving Orta the only one associated with the Garner killing to be jailed.

Never mind that a Time Magazine interview with Orta about the Garner killing won the World Press Photojournalism award, the top award in the industry for short videos. The cops are completely brazen and respect nothing.

During this entire ordeal for Orta, there has been not one word of sympathy, support or outrage from New York’s mayor, the liberal Democrat Bill de Blasio. There is a lesson in this, not just for New Yorkers but for the entire movement, about the tendency of capitalist liberal politicians to retreat in the face of right-wing pressure.

Framed on a gun charge

Following the release of the video, Orta was framed up on a gun charge by the cops. His spouse was arrested as well. His brother, his mother and he were then charged by police with nine counts of selling drugs to undercover cops.

Orta’s friends and supporters from all over the country crowd-funded and finally raised the $16,250 needed to bail him out. But the prosecutor held up his release, saying that all the donors had to be investigated to be sure that the donations were not from “illegal sources.”

At the Rikers Island jail, 19 prisoners on Orta’s cell block were sickened by rat poison that turned up in their food. Fearing for his life, Orta refused to eat prison food and lived on vending machine candy.

What is important about the political circumstances of the illegal and blatant persecution of Orta is that it happened under the regime of a liberal mayor, Bill de Blasio.

De Blasio was swept into office on a campaign against gentrification, charter schools and above all the “stop-and-frisk” policy of former Mayor Michael Bloomberg and his police commissioner, Ray Kelly. The de Blasio victory was largely based on his promises to end police harassment of the Black and Latino/a communities.

It is important to understand the evolution of the relations between de Blasio and the cops. Under police pressure and pressure from the ruling class, de Blasio has done what liberals always do in the face of the right wing — retreat.

The high point of de Blasio’s liberalism was after the killing of Garner, when he took the podium at a press conference, at a time when the Black Lives Matter movement was putting tens of thousands of people in the streets. De Blasio talked of his fears for his own son, who is Black. He spoke of teaching him to be cautious when approached by police.

Shortly after this speech, two New York City police were killed in a random shooting. The cops and the ruling class seized upon the killings to try to push back the Black Lives Matter movement. They organized a virtual state funeral for one of the cops, attended by Vice President Joe Biden, New York Gov. Andrew Cuomo, de Blasio, a host of other officials, and 20,000 cops from all over the country.

At the funeral, hundreds of cops turned their backs when de Blasio spoke. All the high government officials voiced the highest praise, not just for the dead cop but for the police in general.

Democratic Party liberal de Blasio got the message from the cops, from the political establishment in his own party and from the ruling class through its media. The message was: Back off from any criticism of the police.

And he did. He continues to justify the “broken windows” policy of mass harassment and arrest for minor offenses and “suspicious behavior.” He says he will veto any legislation that would outlaw police use of the chokehold. He stepped up his criticism of Black Lives Matter and, in general, beat an obsequious retreat in the face of police attack and ruling class criticism.

Does this mean that de Blasio is not a capitalist liberal? No, he is one. But the emphasis should be put on “capitalist” first and liberal only when it is permitted by the bosses. Meanwhile, Ramsey Orta, whose video exposed the truth about the police killing of Eric Garner, had to spend months in jail for his courage.