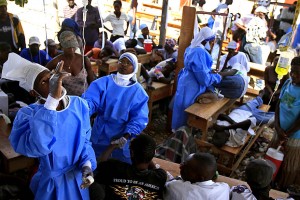 In October 2010, some of the troops in the United Nation’s military forces introduced cholera to Haiti. Since that time, 800,000 people or 6 percent of the country have gotten the disease, and 8,000 or so have died. There have been 32,000 cases and 480 deaths in the Dominican Republic and 700 cases and three deaths in Cuba.

Cuba has had the largest and most significant contingent of medical workers in Haiti following the earthquake, with 1,200 there by 2010. Another 550 Haitian doctors have been trained in Cuba.

Some progress has been made over the past three years in reducing both the number of new cases and the death rate from cholera in Haiti, which is the epicenter of this epidemic

Haiti Libre, one of the major online Haitian news services, writes that this increase is due to “under-financing” and the resulting “diminution of on-the-ground humanitarian services.” (March 28)

The U.N. denied its responsibility for years. Then, in the face of incontrovertible evidence, the U.N. admitted its fault. Nevertheless, with the support of the U.S. and French governments, the U.N. fought off lawsuits in U.S. courts that would have required it to pay for the damages it caused by introducing cholera in Haiti.

In Haiti, more than 25 percent of the people live on less than $1 a day. Only 2 percent live on more than $10 a day. Given the dire poverty, when international aid slackens, it is very hard for the Haitians to make up for the gaps. This is true even when they know what should be done.

Some 300,000 Haitians are still living in tents, as they have been since the 2010 earthquake, and subsisting on $1 a day. They cannot afford to buy hand soap, toilet paper or a bottle of clean water, which is what they would need to do to prevent cholera.

The infrastructure to publicly supply water that is safe to drink doesn’t exist in Haiti, nor does safe disposal and treatment of human wastes.

The U.N. admits Haiti’s problems. Together with the Haitian and Dominican governments and regional Latin American and Caribbean councils, the U.N. has put together a so-called plan to fix Haiti’s structural problems, which would remove the threat of cholera.

The U.N. has spent billions on Minustah. This is the name of the U.N. military forces that occupy Haiti. Minustah was first installed to give a U.N. cover to a U.S.-led occupation, with support from the French and Canadian governments. Minustah’s main objective is keeping the Haitian people under control.

To live in health is a basic human right, which the U.S. and its junior imperialist partners, France and Canada, have denied the Haitian people through the U.N. and Minustah.