The capitalist ruling classes in countries all over the world are pressuring local and national governments to spend less on services like education, health care, public transportation, roads and water, and pay more attention to cutting wages and pensions. Resistance to these austerity policies is growing, as workers showed with major protests in Quebec, Ireland and Belgium. 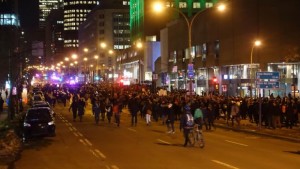 Quebec, nearly as big as Alaska, stretches from the western border of New York state to Newfoundland, far to the east of Maine. The major part of its 8 million people live in the cities of Montreal and Quebec, but some also inhabit remote, isolated parts like the Gaspé Peninsula and Côte du Nord.

Some 50,000 university students all over this vast province have been on strike since March 23, after strike votes on their campuses. Fifteen thousand students marched in Montreal on April 3, defying the cops. Unions and community groups have held smaller protests.

The Montreal protest marked the end of a day in which 133,000 students throughout the province walked out, even though the minister of education called on local campuses to expel student leaders.

These protests and the strike have been called by the Association of Student Union Solidarity (ASSE).

Two thousand five hundred union members formed a human chain around the National Assembly, Quebec’s parliament, on March 30 to mark the end of their contract. They want a 13.5 percent raise over the next three years, while the offer from Quebec’s government is two years of a salary freeze and a 1 percent raise each year of the next three.

There was also a smaller picket line in front of a pediatric hospital in Montreal on April 1 since the government’s budget cuts are going to severely affect the services it provides.

All these protests are pointing to and supporting the call for a provincewide general strike on May 1.

Under pressure from the European Central Bank and the International Monetary Fund, the Irish government has imposed a major increase in the amount it charges for water. Tens of thousands have gone to the streets in major protests over this charge ever since it was announced by Prime Minister Enda Kenny.

Memet Uludag of “People Before Profit” and the Irish Anti-Racism Network, spoke in the context of United Nations World Anti-Racism Day.

“We say today water is a human right. Black and white, we will unite and we will fight. From Bolivia to Detroit to Greece, people have been fighting against cuts, against austerity.” (Irish Times, April 6)

The government has said it won’t compromise, but some members of the Irish Parliament who spoke on April 5 were predicting that the parliamentary regime would fall over this issue.

The Belgian government has announced it will raise the age of retirement from 65 to 67 years and change the way raises are calculated, which would cost each worker $22,000, or six months’ salary, over the course of her or his career.

On March 30, both the Flemish-speaking (Flammond) and the French-speaking (Walloon) unions held a joint demonstration in Brussels against these austerity proposals. Both called for a general strike on April 22 against their employer, the government of Belgium.