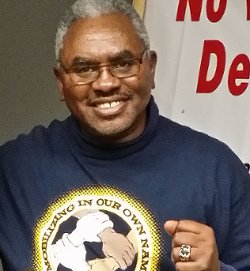 On April 11, family, co-workers and friends will gather in Oakland, Calif., to celebrate Brother Clarence Thomas’ retirement from 30 years of longshore rank-and-file unionism and activism on the Bay Area docks.

In 2004, the call for workers to mobilize in our own name was a clarion that challenged the status quo of submerging working-class issues to electoral politics. The Million Worker March gathered thousands of workers at the Lincoln Memorial in Washington, D.C. It began raising the curtain on a stage where workers, especially oppressed workers, become the protagonist. It was a young longshore worker’s idea and the political support and personal sacrifice of one of the International Longshore and Warehouse Union’s militant veterans.

We saw the MWM’s call to re-establish International Workers Day, May Day, here in the land of its origin reflected in the massive 2006 immigrant general strike on May 1, preceded by an important 2005 May Day march and rally in New York City with MWM East in the leadership.

Occupy did not originate in the organized labor movement, but its slogan “We are the 99 percent” clarifying class relations, plus the fight for $15 an hour and a union and the Black Lives Matter movement are all reapplying the action tools of the historic ILWU, in new and daring ways, stopping capitalism’s wheels to make their demands.

Building the MWM in Washington, D.C., also began a decade-long collaboration with the real Clarence Thomas, which developed Workers World weekly newspaper into a voice for the militant Black workers and rank and file in ILWU Local 10.

From justice for Hurricane Katrina survivors to blocking Israeli apartheid ships, in union conventions and conferences to organize the South, in the critical months of union struggle around the Export Grain Terminal in Longview, Wash., Clarence Thomas gave voice to struggle laced with the dynamic history of the ILWU in the pages of Workers World — and a pamphlet: “United! ILWU ranks and ‘Occupy’ fight ‘Wall St. on Waterfront.’”

We became collaborators and friends with both Clarence and his partner, Delores. Retirement opens a new door and role in the coming battles. We look forward to marching side by side.