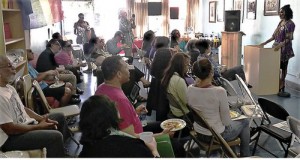 Los Angeles — Women leaders in the anti-police brutality struggle that reaches from Oakland, Calif., to New York City gathered at the Harriet Tubman Center for Social Justice here on March 22 to discuss the growing movement against racist police terror and to highlight the growing number of women being targeted.

Gloria Verdieu, from San Diego’s Committee Against Police Brutality and People’s Power Assembly, set the tone throughout the meeting as she emceed this Workers World-sponsored event.

Verdieu presented a powerful slide show with the faces of women who have lost their lives to police terror all across the United States. Although most were women of color — since people of color are the primary targets of police attacks — the multinational character of the victims dramatically exposed the fact that no one is safe from police murder. Verdieu said the killing of women by police can no longer remain invisible to this movement.

The slides continued to run throughout the meeting, intensifying every speaker’s words.

Ishtyme Robinson, of Mothers Against Youth Genocide, talked about her loss of two children to police terror, while emphasizing that she didn’t want people’s pity or any gestures to help her. What she wanted was for people to join the struggle against police killings and to examine and eliminate whatever distractions they may have that keep them from fighting back against police repression.

The gathering also heard from Cat Brooks, the leader of the Anti-Police Terror Project and co-chair of ONYX, groups that have courageously participated in militant actions in Oakland, including the shutting down of the Bay Area Rapid Transit system. Brooks inspired the audience with her description of how the APTP is organizing communities, including political education on tactics, messaging and activism, with an emphasis on maintaining leadership by people of color.

Lesbian activist Teresa Gutierrez, a Workers World Party leader and co-chair of the May 1st Coalition for Worker and Immigrant Rights, gave a rousing talk that scrutinized the backward slight made by Patricia Arquette at the Oscars against people of color and lesbian, gay, bisexual, transgender and queer communities. That, said Gutierrez, was an action against solidarity that pushed the women’s movement in a backward direction. She explained how fighting for those in the streets of Ferguson and against the attacks on LGBTQ people were women’s issues that strengthen all women.

Gutierrez said that white women especially had to champion those struggles, not deny and counterpose them as Arquette did. These remarks were especially appreciated by members of the African-American Caucus of the Service Employees’ United Long Term Care Workers who attended the meeting. They told about their union’s campaign to raise the minimum wage to $15.

All the speakers were excited about the youth who activated this nationwide movement against police terror. Danielle Longchamps, a leader of the youth organization FIST (Fight Imperialism, Stand Together) in Baltimore, highlighted the work being done in that city by several organizations to keep the Black Lives Matter movement active there. She gave a personal account of the daily challenges women face as they combat racism, police terror and the unfortunate tolerance that enables the objectification of women. Longchamps said this sexist objectification of women must be fought, especially by those organizations which consider themselves progressive.

Commenting on the success of the meeting, Maggie Vascassenno, of Workers World Party in Los Angeles, who coordinated the event, said, “There’s a beautiful new movement against police terror growing in this country, and this meeting once again highlights the fact that women are in the leadership of this movement, in particular women of color, lesbian and trans women.” 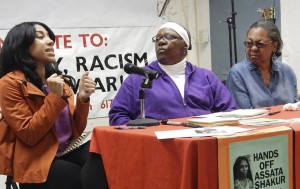 On March 21, the Women’s Fightback Network, Team Solidarity and Workers World Party held an International Women’s Day forum in Boston attended by women and men on the theme, “Every Issue Is a Women’s Issue! Globalize Women’s Solidarity!” The forum was addressed by women speakers from Black Lives Matter, the Boston School Bus Union, Veterans for Peace, the People with Disabilities Caucus, the Women’s Fightback Network and Workers World Party. A leader of a high school walkout talked about the struggle that precipitated the walkout.

The Boston WW Bureau contributed to this article.