Some of participants at memorial for Transgender warrior Leslie Feinberg leading the singing of the Internationale at SEIU building in New York City, March 28.
WW photo: Brenda Ryan

Workers World Party commemorated and celebrated the life and contributions of our beloved comrade, Leslie Feinberg, with a memorial in New York City on March 28 at the Martin Luther King Jr. Labor Center at 1199 SEIU United Healthcare Workers East. Leslie was a member of the party’s national committee.

Feinberg joined Workers World Party in 1973 through its branch in her Buffalo, N.Y., hometown and died at age 65 in November after decades of illness from tick-borne diseases. Her last, very deliberate words were: “Remember me as a revolutionary communist. Hasten the revolution!”

Building on the groundbreaking work of WWP member Bob McCubbin in his “Roots of Gay and Lesbian Oppression” (1976), Leslie developed the first Marxist analysis of the origins of transgender oppression in “Transgender Warriors: Making History” (1997) and numerous writings. She was internationally recognized for this theoretical work, as well as her activism for workers’ rights; lesbian, gay, bi, trans and queer liberation; the rights of women, prisoners and people with disabilities; and against racism and imperialism.

During her life, Feinberg was clear this work sprang from principles established for Workers World Party by founding comrade Sam Marcy, including his insistence that LGBT lives were to be honored and LGBT oppression was to be fought against as integral to the working-class struggle. 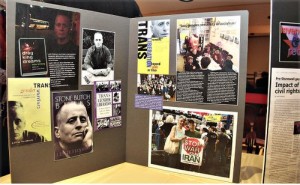 Feinberg requested no memorial except one given by Workers World Party. She asked that this be used to strengthen the party and to bring comrades and friends together to share lessons of political experience relevant to ongoing struggles.

The memorial movingly and amply documented Feinberg’s life dedicated to “hastening the revolution,” and contained many pointed and poignant lessons in building a “workers’ world.”

A program of WWP members and friends from across the U.S. offered anecdotes of moments when Feinberg extended respect, solidarity, empathy, access, compassion, caring, political insight and revolutionary optimism in individual personal encounters and day-to-day political work. Comrade LeiLani Dowell, a managing editor of WW, summed up the impact of those moments, “I want to say, fist held high, Black and queer and proud, that I and my comrades will forever continue the struggle in Leslie’s name.”

McCubbin told of meeting with Feinberg at the beginning of her life in the party; how she talked to him as a worker who had, in her words, “barely completed high school;” how she spoke of the intimidation of weighty ideas; and how the party nurtured her as a worker-intellectual, who then created her groundbreaking theoretical work. McCubbin emphasized that Feinberg — using the Marxist dialectical-materialist method to interpret both her own life and that of other workers within broad social, political and economic developments — was able to bring hope to millions that the “capitalist nightmare” could be ended.

Feinberg defined herself as “an anti-racist white, working-class, secular Jewish, transgender, lesbian, female, revolutionary communist.” She used the complexities of her identities as the starting point for a Marxist-Leninist analysis.

International Action Center co-director and WWP secretariat member Sara Flounders stressed that Feinberg exemplified the process by which “the oppressed themselves bring their own issues and lives into the struggle” using Marxism as a tool.

Feinberg shared those insights with the working class, not just through her individual writings, but by serving as a managing editor of Workers World newspaper, writing hundreds of articles and serving for some years as editor of the political prisoners’ page. Workers World editor and party secretariat member Deirdre Griswold reflected that Feinberg never allowed her individual fame in the wider LGBTQ movement and literary world to be used by the ruling class to divide her from the working class. Instead, through her work Feinberg “made people feel the significance of their own lives.”

Bet Power Alwin, director of the Sexual Minorities Archive, spoke of one of Feinberg’s last acts in support of the political development of the working class and especially of transgender people — the donation of her research library to the Archive, where it will be freely accessible to all.

Rooted in the working class

Feinberg’s deep roots in the working class and her long connection to Workers World Party were highlighted by founding comrade Milt Neidenberg. He noted that her father, a bitterly anti-union worker at Bell Aircraft in Buffalo, benefitted from the successful 1949 strike led by comrades who went on to found WWP.

Neidenberg first met Feinberg when she spoke at a 1968 street meeting for the United Farm Workers in Buffalo. Her commitment to labor militancy stretched from then through the 1994 founding of Pride at Work, to which she helped contribute the word “transgender” to its self-definition, and the 2002 Harvard Living Wage sit-in struggle. She was a proud member of United Auto Workers Local 1981, the National Writers Union.

Because discrimination against her as a transgender person made it impossible for her to get steady work, Feinberg earned a living for most of her life through a series of low-wage temp jobs. And as a trans person, she also experienced violence, constant physical abuse, threats and disrespect, as comrade Tom Scahill reflected. These experiences grounded her commitment to medical care and access for transgender people, her work for women’s access to abortion, and her participation in clinic defense against 1992 and 1998 anti-abortion assaults in Buffalo.

Comrade René Imperato noted that Feinberg’s “contributions to all of humanity” included “fighting in the streets” — through street rallies, marches and demonstrations and in literal street battles — to defend the most oppressed. Imperato and Feinberg fought side by side against bigots attacking gay and trans people — mostly people of color — at a bar once located only 100 yards from the meeting hall.

Feinberg’s fighting spirit continued through her 2012 arrest to protest the imprisonment of African-American trans woman CeCe McDonald, jailed for “daring to fight back against those who would kill her,” as comrade Kris Hamel, a WW managing editor, recounted.

A video was shown of Feinberg’s speech to a standing-room-only Madison Square Garden event to free political prisoner Mumia Abu-Jamal. Feinberg was one of the founders of Rainbow Flags for Mumia, which organized the meeting in 2000. Comrades spoke of her key roles in other anti-racist campaigns that WWP took on, from the 1974 school desegregation struggle in Boston to the 1988 anti-Klan march in Atlanta.

‘Only socialism will free us all’

Throughout the memorial, comrades and friends emphasized that Feinberg always used insights into her own oppressions to forge connections with all oppressions, including international solidarity with countries under assault by neocolonialism and imperialism. Her very first Workers World demonstration was in support of Palestine in 1973, as comrade Betsey Piette noted, and comrade Joyce Chediac spoke of her last international travel in 2007 in support of ASWAT, an organization of Palestinian lesbian women.

Comrade Frank Neisser was emphatic, “Leslie’s legacy is clear: militancy, solidarity, struggle, communism.” WWP secretariat member Teresa Gutierrez spoke of Feinberg’s love of the glorious Cuban revolution. Gutierrez affirmed that Feinberg made a unique contribution with her book, “Rainbow Solidarity: In Defense of Cuba” (2009), by countering U.S. imperialist misinformation about LGBTQ life in Cuba. Gutierrez stated what Feinberg knew: “Only socialism will free us all.”

We mourned comrade Leslie Feinberg as comrade Pam Parker sang Nina Simone’s “I wish I knew how/It would feel to be free /I wish I could break/All the chains holdin’ me.” And we mourned as comrade Martha Grevatt spoke the poetry Lenin quoted on Frederich Engel’s death: “What a torch of reason ceased to burn, what a heart has ceased to beat!”

We vowed to emulate Feinberg when WWP secretariat member and a WW managing editor Monica Moorehead said, “Leslie Feinberg, you fought for your own liberation and that of your class until the very end!”

And at the end, we affirmed Feinberg’s commitment to a revolutionary communist workers’ world by singing the “Internationale,” the revolutionary anthem of the world working class: “Arise ye prisoners of starvation, Arise, ye wretched of the earth,  … The earth shall rise on new foundations; … We have been naught, we shall be all!”

Note about pronouns: Leslie said in a 2006 interview: “For me, pronouns are always placed within context.” Over the years, comrades and friends have related to Leslie through a range of pronouns. But Leslie’s preferred pronouns with close friends and family were she/her and ze/hir, and thus the former have been used here.