The call for international solidarity in the fight for women’s equality and justice was loud and clear on March 17 as representatives of the Women’s International Democratic Federation (Federación Democrática Internacional de Mujeres) held its annual meeting at the Church Center of the United Nations in New York City. 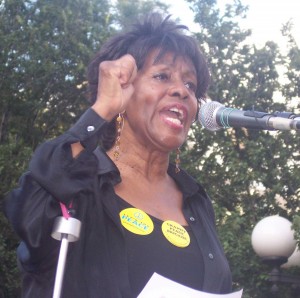 The accomplished actor, educator and activist, Vinie Burrows, the WIDF-FDIM representative to the U.N., opened the meeting with a short video and led a rousing cheer celebrating the freedom of the Cuban 5, whom the U.S. unjustly imprisoned for so many years.

Alicia Campos Perez, a member of the Cuban Women’s Federation and a coordinator of the American and Caribbean Regional Office of the WIDF-FDIM, chaired the meeting. She noted that the organization, founded in 1945 by socialist and communist women, was marking its 70th anniversary dedicated to international solidarity and the struggle for peace. WIDF-FIDM’s mission is “to promote the presence of women in decision making at all levels, combating discrimination and violence against women, and denouncing inequality practiced against women.” She added, “We have a long way to go to achieve those goals.”

Campos introduced a panel, entitled “Beijing + 20, Women and Work: Equal Pay for Equal Work,” who assessed women’s progress in their countries 20 years after the U.N.’s Fourth World Conference on Women held in China in 1995.

‘A strong women’s movement is a must’

Maria Gabriela announced that the ­Angola Women’s Organization is countering economic inequality with a national educa­tional campaign at the community level. Viviane Prado, representing the Brazilian architects union, noted that women are fighting an uphill battle for equal wages there. Delia Selene de Dios, of the National Union of Mexican Women, stressed that the Mexican economy is going backwards because the current neoliberal government is in service to the world banks. She condemned the “feminization of low-paid work.”

Pointing out that the U.S. prison population is the largest in the world, Berta Joubert-Ceci, of the Women’s Fightback Network at the International Action Center, noted that poor women of color, jailed mostly for crimes of survival, are the fastest growing segment of prisoners and often encounter widespread sexual abuse and inadequate medical care like many incarcerated women. She denounced the latest U.S. hostility toward Venezuela, saying, “This country, with so many crimes against women, dares to attack the Bolivarian Revolution!”

Joan Salvador, of the organization Gabriela in the Philippines, pointed out that 69 percent of those not in the labor force are women; that the minimum wage is $10 a day, with women earning 35 percent of what men make; and that women contract workers earn a dollar a day. “No wonder there are 12 million Filipino migrant workers all over the world,” she stated.

Two women were recognized from the floor: Layla Naffa Hamarneh, of the Arab Women’s Organization of Jordan, who thanked everyone for their support of the Palestinian struggle. Cheers erupted when she said, “We stand united behind Palestine and all liberation movements.” Bathabile O Dlamani, of the Department of Social Development of the Republic of South Africa, said, “WIDF must work to make the Commission on the Status of Women vital again. A strong women’s rights movement is a must. We cannot allow the CSW to talk about us without us.”