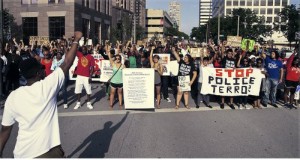 March 23 — Police repression against Wisconsin’s Black communities accompanies Gov. Scott Walker’s anti-union and anti-worker “right-to-work” law, which went into effect March 9 as part of his austerity program. Given the combined impact of these two attacks, the political servants of Wall Street have to worry that a mass rebellion in Milwaukee could unite wide sectors of the working class and oppressed and spread throughout Wisconsin.

Bringing this to a head is the appeal hearing for killer cop Christopher Manney, which enters its fifth day today. Manney shot Dontre Hamilton 14 times on April 30, 2014, at Red Arrow Park in downtown Milwaukee, killing him instantly.

Hamilton, a 31-year-old, African-American man, was resting peacefully in the park when Manney began a “pat-down search.” When Hamilton objected to being accosted, the cop shot him dead in broad daylight. Hamilton’s family and supporters reacted, forming the Coalition For Justice, which, since Hamilton was gunned down, has been leading some of the largest mass protests and direct actions against police terror in Milwaukee’s history. Black, Brown and other people of color, and working-class whites have been participating in this struggle for justice.

Cop impunity in the age of austerity

On Dec. 23, Milwaukee District Attorney Jonathan Chisholm said he would bring no criminal charges against Manney. In response, mass protests shut down I-43, a major interstate highway that runs through Milwaukee. The family is now pushing federal courts to charge Manney.

The appeal hearing is taking up whether Manney will be reinstated, possibly with back pay and benefits. Milwaukee police Chief Edward Flynn fired Manney last fall, allegedly because Manney conducted an out-of-procedure pat-down on Hamilton.

Despite Flynn’s platitudes about “procedure,” the resistance led by the Coalition For Justice has turned a national and international spotlight on  Hamilton’s case and related police terror in Wisconsin, such as a Madison cop’s killing of Tony Robinson, a 19-year-old, African-American youth on March 6 in the state capital.

The ongoing determination of the people of Ferguson, Mo., the courage of the Hamilton family and the relentless struggle of the Black Lives Matter movement in Milwaukee and elsewhere is why Manney’s appeal hearing is even taking place.

Black people living in Wisconsin live under virtual apartheid-like conditions. The state has the greatest disproportion of Black prisoners in the country. In segregated Milwaukee, Black infant mortality rates are triple that for whites, and the unemployment rate for Black males between 18 and 35 years of age has been over 50 percent. Austerity policies such as imposing Workfare as well as those the right-wing legislature recently enacted are worsening these conditions.

On April 1, the food stamp program in Wisconsin, called Food Share, will require adults between the ages of 18 and 49 to work, be “in training” or “prove” they are looking for work 80 hours a month if they are to get any Food Share assistance at all.

The new, 2015-2017 Wisconsin Legislature is now “debating” legislation that attacks every single sector of the working class and oppressed in Wisconsin. These legislative initiatives include eviscerating historically progressive and earth-saving environmental laws; semi-privatizing the University of Wisconsin system; and implementing cuts of hundreds of millions of dollars to social safety nets. Also involved is the attempt to wipe out progressive and other laws benefiting workers and communities, such as workers’ compensation regulation, prevailing wage and project labor agreements, including by imposing a “right-to-work” law, which means for workers a “right” to work for lower wages.

Walker, who is in the process of exploring a run for the 2016 presidency, is traveling the country, appealing to the far right, especially those with money to donate. He is visiting areas such as Arizona and South Carolina, with a planned trip to Israel in April.

Michael Skwierawski is the hearing examiner for the Manney case. Three Milwaukee fire and police commissioners will serve as the jury, made up of chairperson Sarah Morgan, vice-chair Kathryn Hein and attorney Steven DeVougas.

To establish if Manney violated rules, the jury will use the lowest burden of proof — a preponderance of the evidence. If the three commissioners determine that any rule violations did occur, they must then decide on what disciplinary action to impose. The commissioners could uphold Manney’s termination or amend it to a lengthy suspension. In the latter case, Manney would receive back pay for the work he missed after shooting Dontre Hamilton 14 times. Or the jury could even determine that no rule violations occurred.

As the appeal hearing began March 19 at the Municipal Building, police accosted supporters of the Hamilton family and the general public, refusing them entry to the hearing room. The cops forced the public to view proceedings from a room where there was a “live feed” and prevented them from bringing placards into the public building.

Despite this repression, dozens of supporters packed into the hearing and adjacent rooms and kept vigil outside. They let the police and their banking and corporate bosses know that the struggle for justice for Dontre Hamilton is moving forward and that they won’t tolerate a reinstatement of Manney. Over the weekend, members of the Coalition For Justice mobilized its members and supporters to keep up a presence at the Municipal Building.

Nate Hamilton, brother of Dontre, said the following at a March 20 press conference at the conclusion of that day’s hearing: “I love our community. When we got really involved and came out as a family, the community did so as well. My hat’s off to our community that wants change, that wants truth, that desires equal rights for all people. That says racial profiling is wrong.

“If we think that profiling is something that saves lives — it’s not. It ends lives. We’ve been seeing it around the nation where young unarmed Black men and women are being profiled and it comes to where they are beaten half to death and killed or shot down. This can’t continue to happen. People can’t assume and continue to make assumptions because they may believe someone is homeless or believe they may have a mental health issue. That doesn’t give [Manney or other cops] any right to say people need to be searched.”

For updates and information: facebook.com/justicefordontre