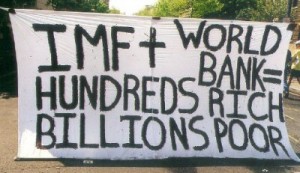 Britain, France, Italy and Germany have agreed to join China in establishing an Asian Infrastructure Investment Bank. China has already announced it will put up $50 billion in initial capital.

It is too early to say what role this bank will play in helping underdeveloped countries modernize their infrastructure. Negotiations among the principals on the bank’s structure and policies are expected to take place for at least a year. What will emerge cannot be predicted at this time.

But one thing is very clear: Wall Street and Washington are fuming over the fact that the European imperialist countries are joining in, despite strong U.S. pressure to stay out.

Criticism of the new development bank by the U.S. has begun, with government officials telling the media they fear it will undermine the “good work” done by the International Monetary Fund and World Bank, which, they say, have aided developing countries while imposing regulations to protect the environment and help the poor.

You’re choking on this outrageous lie right now? So are we.

Tons of both popular and scholarly analyses of these institutions, and especially of the “structural adjustment programs” they have forced down the throats of poor countries, show that the kind of “development” they foster has usually done just the opposite: stripped countries of needed government services, increased their indebtedness and  hurt the environment, all to benefit the financial institutions of the imperialists.

Take the West African countries of Guinea, Liberia and Sierra Leone, for example, which have been going through the most horrific public health emergency caused by the spread of the Ebola virus. These countries are so poor that, even after Liberia declared an end to new cases, a televised news report on the return of a score of students to classes pointed out that their grammar school, which when full serves 1,000 students, has no electricity and no running water.

On Dec. 22, The Lancet, a preeminent British medical journal, published a commentary called “The International Monetary Fund and the Ebola outbreak.” It reads: “A major reason why the outbreak spread so rapidly was the weakness of health systems in the region. … Since 1990, the IMF has provided support to Guinea, Liberia and Sierra Leone, for 21, 7 and 19 years, respectively, and at the time that Ebola emerged, all three countries were under IMF programs. However, IMF lending comes with strings attached — so-called ‘conditionalities’ — that require recipient governments to adopt policies that have been criticized for prioritizing short-term economic objectives over investment in health and education.”

The authors add that “economic reform programs by the IMF have required reductions in government spending, prioritization of debt service, and bolstering of foreign exchange reserves.” In other words, recipient countries — which should be receiving reparations for all the wealth extracted from them by colonial rule — have instead been forced to cut back on health care, education and other services in order to pay interest on loans.

Why does the U.S. ruling class feel particularly threatened by this new China-headed development bank? Because U.S. banks have dominated the financial architecture of the capitalist world for decades. The U.S. emerged from World War II as the undisputed global industrial and financial powerhouse, while Europe and Japan were in ruins and all regions involved in the world war were suffering.

The intention of the U.S. imperialist ruling class to translate its military and industrial muscle into financial domination over the rest of the world was made clear even before the war ended, with the founding of the International Monetary Fund and the World Bank at the Bretton Woods Conference in 1944. This conclave in New Hampshire of the soon-to-be-victorious Allied powers was dominated by Washington and London. It established the “tradition” that the president of the World Bank would always come from the U.S.

One can read many critiques of these institutions. One was an interview by Greg Palast with Joseph Stieglitz, a former chief economist of the World Bank, member of Bill Clinton’s cabinet and chair of his Council of Economic Advisers who turned against his former bosses.

Stieglitz told Palast that when nations are “down and out, [the IMF] squeezes the last drop of blood out of them. They turn up the heat until, finally, the whole cauldron blows up.” He referred to these social explosions as “IMF riots,” pointing to what happened when the IMF eliminated food and fuel subsidies in Indonesia in 1998, when it made Bolivia increase water prices in 2000, and when the World Bank imposed a rise in cooking gas prices on Ecuador in February 2001. (“IMF’s Four Steps to Damnation,” The Observer, April 29, 2001)

In Guinea, Liberia and Sierra Leone, the people have tried to get rid of governments that served as tools of these imperialist-dominated financial institutions and have looked for other ways to climb out of poverty. In Latin America, the result has been ALBA (Bolivarian Alliance for the Peoples of Our America) — an alliance of countries, led by Venezuela, that is trying to break free of the stranglehold over their economies imposed by U.S. imperialism for nearly two centuries.

The anti-colonial revolutions that began in Asia in the 1930s and spread throughout the so-called Third World in the 1950s and 1960s drove out the structures of direct colonial rule. Bretton Woods was the answer of the imperialists: Keep the masses of people enslaved to the banks.

Washington’s objections to the new Asian Infrastructure Investment Bank have nothing to do with anything except the fear of U.S. capitalists that they could be losing their grip on what has been their main tool for world domination. As a backup, of course, they have the Pentagon, making the struggle against imperialist war ever more urgent.