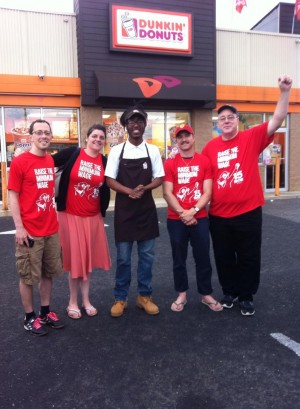 Philadelphia, named the poorest big city in the U.S. by a recent census report, has become the latest city to discuss a $15-an-hour minimum wage. On March 4 more than 150 workers, activists and faith leaders, organized by 15NOW, packed Philadelphia City Hall to urge officials to legislate against poverty wages. Dozens of low-wage workers testified before the City Council about the urgent need to raise the minimum wage, which is a paltry $7.25 in Pennsylvania. Despite a state law that makes it illegal for cities to raise minimum wages locally, supporters are hoping that such a resolution will trigger a legal and legislative challenge to the state. (Eyewitness report from Scott Williams)

Papa John’s delivery workers in NYC to get $2.1 million in back pay

A New York County Supreme Court judge on March 3 ordered the owner of five Papa John’s restaurants in the Harlem section of Manhattan to pay out more than $2.1 million in back pay and damages to hundreds of delivery workers. The court found that franchisee New Majority Holdings and owner/operator Ronald Johnson consistently paid workers less than the minimum wage, stole workers’ wages and illegally withheld overtime. This judgment comes less than a month after a New York court ordered another Papa John’s franchisee to pay out almost $800,000 in back pay for stolen wages. Luis Juarez, a worker at a Manhattan Papa John’s restaurant, urged more workers to stand up against wage theft, stating, “I ask my colleagues not to remain silent against injustice, and to demand payment for the hard work they do.” (ag.ny.gov, Mar. 5)

The U.S. Senate voted on March 4 to block a newly enacted National Labor Relations Board regulation which reduces the amount of time workers have to wait between signing union cards and holding union elections from a median of 38 days to 11. The regulation, which was first reported by Workers World on Dec. 28, is designed to prevent companies from using  worker intimidation to influence union elections. The House of Representatives is expected to follow the Senate in blocking the regulation, but President Barack Obama has vowed to veto the block and uphold the NLRB ruling. (RHrealitycheck.org, Mar. 5)

The study “Status of Women in the States: 2015,” published in March by the Institute for Women’s Policy Research, reports that women workers’ economic status has gotten worse or stayed the same in almost half the 50 states and the District of Columbia over the last 10 years. The IWPR used four indicators to evaluate women’s economic status based on full-time, year-round work: the percentage of women in the workforce, the number of women in professional or managerial positions, women’s median yearly earnings, and the gender wage gap. Women constitute the majority of the low-wage workforce, while higher paying technology and engineering jobs remain dominated by men. White women are paid on average 22 cents less than white men, or 78 cents, though the gap increases for women of color, with Latinas earning the least. The gap is closed for women in unions by almost 50 percent, or 10 cents. Women workers in the Northeast and mid-Atlantic states fared the best, while those in Southern states fared the worst. Based on current statistics, the survey estimates the wage gap will not close entirely until the year 2058. (RHrealitycheck.org, Mar. 12) That means we need to make some real changes mighty soon!