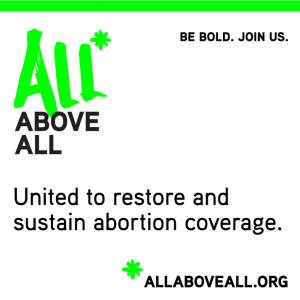 The Justice for Victims of Trafficking Act of 2015 (S. 178) was considered a bipartisan bill when it was introduced in the U.S. Senate on Jan. 13. When an anti-abortion provision was discovered on March 10, protests from human rights, civil rights, legal, reproductive health and women’s groups erupted.

If passed, the bill would discriminate against victims by denying essential medical coverage for abortions, and it could expand the Hyde Amendment far beyond its current scope. The amendment currently restricts federal Medicaid funding for abortions for poor women.

In a survey of 67 sex trafficking victims conducted by Laura J. Lederer for the Department of State, more than half reported having had abortions. About three out of four women said they’d had at least one pregnancy while being trafficked, and 20 percent reported five or more. Amnesty International estimates 60 percent of women and girls who come across the border report being raped. (fusion.net, March 11)

The stated goal of the JVTA, which passed the House earlier this year, is to go beyond earlier bills in addressing child abuse and protections for victims of trafficking. One provision is funding programs for victims by using fines charged to traffickers That sounds innocent enough. But by including fees and fines, not just taxpayer funds restricted by Hyde, pro-choice groups fear that could entrench the Hyde amendment and lead to many more abortion restrictions in the future. (thinkprogress.org, March 11)

Reproductive health care activists have fought to repeal Hyde since it was passed in 1976. It was the first major national attack on access to abortion, which unfairly discriminates against those who have the least financial resources — women of color, young, immigrant, disabled, rural and transgender women.

Sen. John Cornyn (R-Texas) denies tacking on the provision in a sneak attack on abortion rights. Jessica Gonzalez-Rojas, executive director of the National Latina Institute for Reproductive Health, told fusion.net the provision is “inexcusable.” “Even more so given the high rates of sexual abuse experienced by Latina survivors. Women, not politicians, should make our own decisions when it comes to pregnancy.”

Kate Stewart of Advocates for Youth said, “Human trafficking survivors, overwhelmingly young women, deserve to have all reproductive health options available to them. This move by politicians is an underhanded attempt to harm women most in need.” (thinkprogress.org)