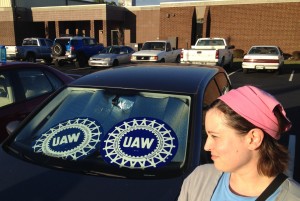 At the VW Chattanooga plant, Lauren Feinauer shows her support of the UAW.

Just over a year ago the National Labor Relations Board conducted a union representation election at the Volkswagen plant in Chattanooga, Tenn. Presumably, with the company’s signed pledge not to engage in anti-union intimidation, it was an easy win for the United Auto Workers.

Yet the union narrowly lost the election. A key factor in the surprise, 712-626 vote was the virulent anti-union crusade by right-wing forces. In particular, Tennessee Republican Sen. Bob Corker threatened workers’ jobs, claiming that if workers went union, the company would not bring new work into the plant. With the backing of the National Right to Work Foundation, Grover Norquist and other right-wing funders, the group “Southern Momentum” broadcast this threat and built the “vote no” campaign through the Internet, Facebook, billboards and anti-UAW T-shirts worn by plant management.

Corker’s “bombshell” turned out to be a complete lie. After the vote VW said that its decision to launch a new SUV at the Chattanooga plant had nothing to do with the outcome of the union election.

Now, Southern Momentum has reinvented itself as the American Council of Employees. The latest incarnation is far more insidious. ACE is signing up members in the plant as if it were a bona fide union. It is being characterized as such by the media: The Associated Press, Reuters, the Chattanooga Times Free Press and the Detroit Free Press all call ACE a “rival” or “alternative” to the UAW. International Business Times tagged it an “anti-UAW union.”

VW management has recognized both the UAW and ACE under its “Community Organization Engagement” policy. Any group having at least 15 percent of VW workers as members is entitled to meet on company premises and bring its concerns to management on a regular basis. How often meetings take place and with what level of management depends on whether that group can claim 15, 30 or 45 percent of the workforce. Any group that reaches one of these tiers functions as a nonmajority, “members only” organization that meets and discusses but does not engage in collective bargaining.

VW’s open shop policy reflects its willingness to work with the UAW to establish a German-style “works council” while at the same time wanting to stay in the good graces of Corker and Tennessee Gov. Bill Haslam, who hold the purse strings to hundreds of millions of dollars in tax incentives.

ACE has barely reached the 15 percent threshold. Meanwhile, the new UAW Local 42 has topped 45 per cent and claims a majority. The spread shows that most workers — angry over issues such as unsafe conditions that cause injuries, the firing of injured workers and having to rotate shifts every week — realize only a real union can give them the voice they need.

Chattanooga teachers’ union activist Chris Brooks, who organized community support for the UAW drive last year, called ACE a pro-company “yellow union … crafted by the business community for the sole purpose of advancing the interests of the business community while publicly proclaiming to actually be a ‘union’ and providing ‘representation’ to the workers.”

The name “yellow union” refers to company-funded unions and also to worker groups that claim no company sponsorship but accept funds from corporate-funded union-busting organizations. Often employing violence, these company unions were created to make it impossible for the militant unions in the Congress of Industrial Organizations to bargain collectively. Corporate-funded groups like the Open Shop Committee — then as now — claimed to be for the “right to work.” The CIO called it what it was: “the tyranny of the open shop.”

Company unions crumbled as workers flocked in droves to the CIO.

The company union makes a comeback

ACE is not directly funded by VW — that would still be illegal — but has the financial backing of powerful ruling-class forces in a “right-to-work” state with an ugly history of segregation and animus towards unions.

Thus, there exists, in 2015, a scenario at VW that recalls the days before the UAW — through militant sit-downs at GM and Chrysler and the 1941 strike at Ford — abolished open shop tyranny. Why is the UAW letting VW engage with this right-wing, anti-union, corporate front group as if it were a union?

The International UAW leadership is pursuing the same dead-end strategy with VW — that of “partnership” to keep the firm “competitive” — that it maintains with General Motors, Ford and Chrysler. Now, workers who want and need a union are frustrated by their UAW leadership, who seem more interested in setting up a works council than in demanding safety on the job.

Nevertheless, the UAW has a foot in the door and that is of paramount significance. The UAW’s presence at VW could open the door to bringing much needed union representation to all of the European and Asian auto “transplants.” This would impact class relations throughout the South.   For the UAW to succeed, however, the only way for it to move forward is to become a fighting union again.