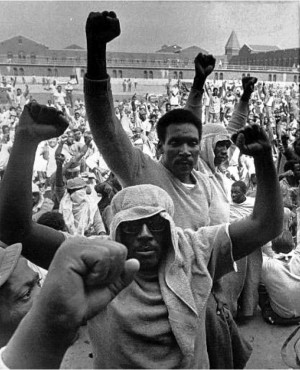 Several judicial rulings in recent weeks demonstrate the determination of the capitalist government to shield the front-line forces of the repressive, racist state — especially cops and prison guards — from individual punishment.

While city police departments and prisons can be investigated and sometimes penalized, the shooters and the beaters have virtual immunity from individual punishment for their crimes. The ruling class relies upon them and their willingness to directly inflict brutality upon the workers and the oppressed to enforce the racist, capitalist order.

In 2011, George Williams, who is Black, was beaten within an inch of his life by white prison guards at the Attica maximum security state prison in western New York. Three of the guards were indicted for gang violence and were facing 81/2 to 25 years in prison on the charges. They had been indicted only because the prison nurse refused to treat Williams after seeing the seriousness of his injuries and ordered him taken to a hospital in Buffalo.

That is how the story got out, leading to the charges. The fact of the beating is not an unusual story in Attica. What is unusual is that the news of this brutality became public.

George Williams ended up with two broken legs, a broken shoulder, a broken eye socket, cracked ribs, and plates and screws in his legs.

The three prison guards recently took a plea deal and wound up with charges reduced to misconduct, a suspended sentence of one year and a guarantee of no jail time. They were let go from their jobs and were free to resume their lives. George Williams is disabled for the rest of his life.

The New York Times did an exhaustive investigation of brutality in Attica, amid cries by advocates of prisoners’ rights and even some officials to shut the prison down altogether.

Why would the Times, a mouthpiece for the ruling class, concern itself with the plight of prisoners in Attica?

In September 1971, this prison was the site of the largest, most important and most political prison rebellion in U.S. history. This fact lives in the memories of both the prisoners and the guards. The establishment does not want to risk another rebellion if the prison authorities get so out of control that they detonate an uprising.

On Feb. 24 of this year, the Justice Department ruled that George Zimmerman, who shot to death unarmed 17-year-old Trayvon Martin after stalking him in a gated community in Sanford, Fla., was not guilty of any civil rights violations.

After he shot Martin on Feb. 26, 2012, Zimmerman was taken in by the police for questioning and released on the grounds that there was no evidence against him, even though the cops had advised him over the phone not to go after Martin. There was no investigation, and the cops gave interviews sympathetic to Zimmerman.

This set off six weeks of national demonstrations, after which Zimmerman was finally arrested and charged. The cops had six weeks to concoct a story and Zimmerman was eventually acquitted using the “stand your ground” defense, a law crafted to protect armed racists. Now the Justice Department, on the flimsy ground of “high judicial standards,” has failed to bring charges of civil rights violations in the case.

So Zimmerman was a legalized, racist vigilante, working under the auspices of the Sanford police Neighborhood Watch program and an informal extension of the capitalist state. He was protected by the courts and the federal authorities. He escaped individual punishment and went scot free so that other neighborhood watch types who protect gated communities, or “stand your ground” racists, would not feel vulnerable or inhibited in attacking African Americans, Latino/as or other oppressed people.

Freedom for torturers at Rikers Island

Rikers Island prison in New York City is an infamous hell hole of brutality, where prisoners awaiting trial are held before being sent to state prison or serve short sentences. This institution has been notorious for years despite reports, journalistic exposés and promises by politicians to change the pervasive culture of violence there.

According to the New York Times, the U.S. Attorney’s office in Manhattan issued a damning report about brutality at the jail complex last August and threatened to sue the city unless conditions there improved. In November, Mayor Bill de Blasio declared that ending pervasive violence at Rikers had become a top priority for his administration.

The reports on brutality at Rikers, especially against youth and mentally disabled prisoners, go back to the administration of Mayor Michael Bloomberg. Yet nothing has been done. The prison guards, with the protection of prison officials and their correction officers’ “union” of thugs and parasites, continue to brutalize with impunity.

For example, the Times reported on Feb. 21:

“On Sept. 2, four correction officers pulled Jose Guadalupe, an inmate classified in medical records as seriously mentally ill, into his solitary-confinement cell at Rikers Island and beat him unconscious.

“A little over two months later, three guards wrestled another inmate, Tracy Johnson, to the floor, pepper-sprayed him in the face and broke a bone in his eye socket. Then, on Dec. 9, yet another group of officers beat Ambiorix Celedonio, an inmate with an I.Q. of 65, so badly that, as surveillance footage later showed, he had bruises and scratches on his face and blood coming from his mouth.”

The Times documented 62 cases of “brutal confrontations” resulting in serious personal injury among inmates between last August and January and cited official statistics of the Corrections Department about the 4,074 times guards used physical force against inmates in 2014, the highest total in a decade.

There are 9,000 prison guards at Rikers. Not one has been indicted or sent to jail. It is almost impossible to dismiss them, let alone charge them with a crime.

Such brutality has become public only because Rikers is the biggest prison in New York City. The regime of prison brutality has grown increasingly severe all over the country in this age of mass incarceration of Black and Latino/a youth and poor people in general. As the prison population grows, the need for control increases and the brutality increases along with it.

To enforce this regime in a country that has 2.4 million prisoners — 25 percent of the world’s prison population — but only 5 percent of the world’s people, the capitalist class and its state not only need to use brutality but they also need to protect the enforcers of that brutality. No investigations or reports or expressions of outrage will stop prison brutality, except for a prisoner rebellion and outside support from a mass movement.

In the first week of March, the Justice Department made two announcements that seemed contradictory.

On the one hand, Attorney General Eric Holder announced the results of a report saying that the police department and the city criminal justice system in Ferguson, Mo., were riddled with the most pronounced and vile racism. It is so bad that the entire police department might have to be dismantled.

On the other hand, Holder announced that the Justice Department found no grounds for a federal indictment of Officer Darren Wilson for violation of Michael Brown’s civil rights. Even worse, Holder and the Justice Department emphatically denied that 18-year-old Michael Brown, who was unarmed, was shot with his hands in the air. Thus Washington lent its full force to the lies of the racist Ferguson district attorney, Robert McCullough, who got the charges against killer cop Wilson thrown out despite eyewitness testimony from people in the community.

Why would the Justice Department charge, on the one hand, that there is endemic racism in the police department, a culture of impunity for arbitrary arrest, brutality and illegal, excessive fines for everything from jay walking to having high grass in your yard that has established a virtual debtors’ prison system against African Americans? Why would it at the same time exonerate a racist cop who was seen to shoot Michael Brown with his hands in the air and who left Brown’s body on the street for four hours?

The answer is very straightforward. Both rulings were in the interests of the ruling class. The judgment against the Ferguson Police Department is a message to all the police in St. Louis and beyond to stop playing with fire. Ferguson is a fuse, and St. Louis is a powder keg which could go off if the police killings and targeting of the Black community are not curtailed.

The Ferguson investigation would never have taken place without the rebellion that began there and swept the country, resulting in the Black Lives Matter movement. Tens of thousands of youth, Black, Brown and white, mobilized for months, disrupted downtown shopping areas, invaded malls, blocked highways and roads, and generally caused havoc in major and minor cities from one end of the country to the other. The struggle drew in athletes, politicians, cultural figures and celebrities.

The ruling class fears a repeat of this kind of rebellion. They know that this movement could grow even larger and more powerful and draw in broader working-class forces, such as the low-wage workers’ movement and other rank-and-file movements, as well as the oppressed and downtrodden in the impoverished communities. This could lead to a challenge to capitalist social stability.

The Black Lives Matter movement forced the federal government to investigate a city of 21,000 people — which is completely out of the ordinary. Right now the Justice Department is investigating the police departments of cities like Cleveland, Philadelphia, Las Vegas, Spokane and Seattle, among others. They all have large urban populations.

The federal investigations in these urban areas with large African-American and Latino/a populations are motivated by ruling-class fear of the spread of social unrest at a time of deep economic crisis, poverty, hunger and unemployment, especially in the oppressed communities.

The investigation of Ferguson, which hopefully will end up alleviating some of the more outrageous aspects of national and racial oppression in the city and surrounding areas, is entirely a byproduct of the heroic and determined resistance of the Black Lives Matter movement. The ruling class knows it and wants to take the steam out of it. In order to do this, sections of the Obama administration want to rein in the cops from acting too much like the overseers of a slave plantation.

On the other hand, the refusal to punish Darren Wilson shows that they do not want to punish individual cops. They do not want to remove their immunity from prosecution or jail. The bosses want the cops to keep doing what they do — that is, beat and kill —  only with more discretion. Rob and pillage with fines, tickets, etc., but do not go so far overboard as to cause another Ferguson or another rebellion on the scale of Watts in 1965, which was also set off by an incident of police brutality.

Struggle against the state and capitalism

As Marxists have shown time and again, the state is an instrument for the repression of the workers and oppressed by the capitalist class, the ruling class, the billionaire profiteers.

The higher levels of the state — for example, the Justice Department — will try to manage this repressive apparatus so that it does not trigger massive uprisings. But those in suits and ties will also always protect the lower level, the front-line forces of repression in blue.

Such a struggle is not immediately on the agenda, but it must be raised, and it will be raised at the Peoples Power Assembly Tribunal on April 2 in New York City at the National Black Theater in Harlem. The struggle against the police, against prison brutality, against mass incarceration is in reality a vital part of the struggle against capitalism.