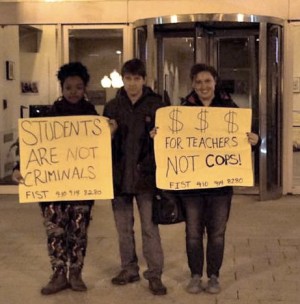 The Board of Commissioners of Baltimore City Public Schools held a public hearing Feb. 24 on a bill recently introduced in the Maryland House of Delegates. House Bill 101 would allow Baltimore City School Police Officers to carry firearms inside school buildings during school hours. Although the hearing was scheduled with very little advance warning, FIST (Fight Imperialism, Stand Together) activists quickly took action to stand up against the further militarization of public schools.

The hearing room was filled well in advance of the start of the hearing with both supporters and opponents of the bill. FIST displayed large signs reading “Students are not criminals!” and “$$$ for teachers, not cops!” The numbers on each side of the issue were relatively similar; the social makeup of each side, however, was entirely different.

Supporters of the bill were all powerful people in society: the Fraternal Order of Police, school police officers, school principals and other school officials. The entire school and police bureaucracy is behind the law. In contrast, opponents of the law consisted entirely of students, parents and activist groups such as FIST and Casa de Maryland. In essence, it was the establishment versus the community.

The arguments by the police were filled with rhetoric and concepts that, upon further examination, were contradictory and untruthful. There were appeals to protect innocent students from shootings in schools, yet also the demonization of Baltimore students as dangerous criminals with weapons. At the same time school cops were spoken of as community leaders and role models for children. The complete distrust of the police by young people of color, in the forefront of the movement against police violence, was predictably absent.

One police officer told how school police regularly break up fights between students, all while unarmed, and said they need firearms to be able to “do their job.” It appears that, despite careful planning, this officer let the truth slip out: The school police want the ability to use deadly force on students. It was never explained why, despite all the intense praise of the police by the establishment, that the police now require firearms after 24 years of being unarmed in the schools.

Opponents of the bill argued that arming police with guns creates an even greater level of distrust between students and police. Young people in poor and oppressed communities understand that a gun on a cop’s belt is not there to protect them, but to be used against them.

A report from a student at Digital Harbor High School indicated that students were more concerned about the police in their school than any other issue, topping even bullying. This comes as no surprise after a school officer recently sent three girls from Vanguard Middle School to the hospital after beating one with a baton and pepper spraying two others.

A Latino high school student addressed the school board through an interpreter, bringing up how the situation relates to students who do not speak English. He raised the issue of non-English-speaking students’ inability to comply with orders in English and the tragic consequences of what can happen when police use deadly force in such circumstances.

The bill is in the hands of the state legislature and is expected to be voted on in March. This will keep the decision out of the hands of working and oppressed families who, through the school board hearing, showed their disgust with the proposed law.

Although the legislature, including the school board, wants to silence criticism of their system and the police, the youth and communities of Baltimore will remain defiant in the face of police terror.