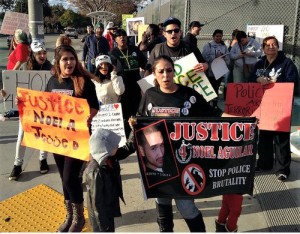 Over 50 family members of Black and Latino youth killed by Long Beach and Anaheim police departments and their supporters rallied on Feb. 28 in Long Beach to challenge this epidemic. Organized by the Young Survivors-Legacy Support Network and Black Lives Matter LBC, the event brought together mothers, sisters, girlfriends, children, dads, best friends and cousins of over half a dozen people killed by local police over the last two years.

The rally focused on many police killings, highlighting the recent case of Noel Aguilar, who was killed by Los Angeles County Sheriff’s Deputies on May 26, 2014, in the city of Long Beach — which is outside their jurisdiction. The event announcement read, “According to several eyewitness accounts, Noel was in handcuffs at the time he was shot, executed by a deputy in a homicidal rage. Noel’s family and friends immediately rose up to protest his killing, which came a year after (and in the same neighborhood as) the extrajudicial murder of his best friend, Jesse Delgadillo, April 28, 2013, by the LBPD.”

Aguilar’s mother, girlfriend and two children were at the rally carrying a banner demanding justice. Loud chanting and marching continued for over three hours.