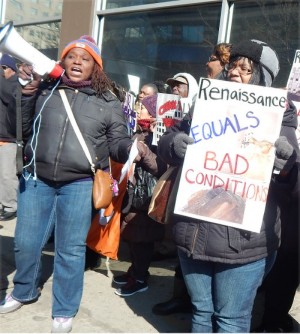 Landlords left the apartments of long-term tenants with cracks in the walls and slanting floors. The new tenants’ apartments had one bedroom renovated into two or three tiny bedrooms and the rents hiked to $3,000 a month. In the opinion of the protesters from the Crown Heights Tenants Union, all renters in Brooklyn were under attack.

That’s why the CHTU targeted two Crown Heights realtors, Renaissance Realty and ZT Realty, on Feb. 27. They protested inside the lobby of ZT Realty, where one tenant complained that ZT had failed to supply heat or hot water for three days in February — which this year were the coldest three days in New York since 1934. The mostly Black protesters chanted, “Jail ZT Realty!”

The CHTU also rallied outside of Housing Court in Brooklyn a few blocks away to demand stronger laws protecting tenants, including not to allow evictions based on the landlord’s desire to get higher rents.

Tenants spoke about horrible conditions of neglect, including cracks in the walls, while in the renovated apartments rents have been raised to triple the amount formerly paid, without guarantees of heat and hot water. They described how the landlords try to scare and pressure families to leave so they can provide apartments at higher rents or convert to condos. All the current tenants are working class and most are people of color.

According to the CHTU website, the “Crown Heights Tenant Union is a union of Tenant Associations that began meeting in October 2013 in response to rampant gentrification, displacement, and illegal rental overcharges in the neighborhood. There are over 40 buildings in our union that have come together to demand new, stronger protections that guarantee tenants’ rights.”

The CHTU uses “a collective bargaining strategy to demand both stricter enforcement of existing tenants’ rights in addition to new, stronger protections that eliminate loopholes in the law that favor landlords. Our demands call for a stronger tenant voice in decisions that impact rental housing and include a five-year rent freeze and restrictions on tenant buyouts.

“The Crown Heights Tenant Union has identified a cycle in which low paying tenants are pushed out, and newer tenants are charged rent far higher than the legally regulated limit. In response to this cycle, we have adopted a unique UNITE AND FIGHT strategy where long-term tenants and new residents of the neighborhood come together with the understanding that the landlords are the true target. We hope to set an example for changing neighborhoods across New York City and the rest of the country.”