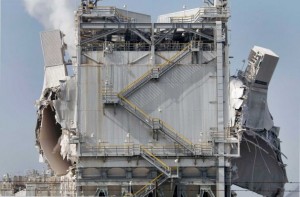 An explosion and fire on Feb. 18 at the ExxonMobil refinery in Torrance, Calif., dramatizes the United Steelworkers’ demand to improve safety conditions in the oil industry to protect both workers and communities. The explosion occurred as 5,200 USW members are conducting unfair labor practice strikes at 11 refineries with safety as a major concern. “Our members work in dangerous and too often deadly conditions,” said USW International President Leo W. Gerard. “While employers have reaped billions of dollars in profits over the past several years, they have done little to improve conditions for workers and surrounding communities.” Luckily, only four workers were slightly injured, while residents were told to close windows to prevent exposure to toxic chemicals. (usw.org, Feb. 18)

Over the Feb. 21-22 weekend, workers at three more refineries and a chemical plant joined the strike, bringing the number of strikers to about 6,550. The union is bargaining for new labor agreements to cover about 30,000 workers at 65 refineries and hundreds of pipelines, terminals, petrochemical plants and other facilities around the country. To show solidarity with the strikers, sign the USW petition at usw.org/act/oilsafety. (aflcio.org/Blog, Feb. 23)

Some 174 health care workers at New York City’s Callen-Lorde Community Health Center, a lesbian, gay, bisexual, transgender and queer-focused health care provider, voted to unionize with 1199SEIU United Healthcare Workers East on Jan. 13. Ariadne Brazo, a mental health patient navigator, told Gay City News: “We felt that the staff didn’t have enough of a voice in terms of our employment. We felt the best way to do that was with a union and we felt that 1199 had a good history of social justice — which Callen-Lorde has as its mission.” The center is the first LGBTQ-focused health center to be unionized in the city by 1199SEIU. (Feb. 5)

United Students Against Sweatshops, a group of U.S. college and university activists, have successfully compelled 16 universities and colleges to sever contracts with VF Corporation. USAS’s ongoing campaign targeted VF after it refused to sign the accord making a legally binding commitment to improve safety for workers producing garments in Bangladesh. The accord has been signed globally since the Rana Plaza disaster in 2013 by over 180 brands from 21 countries, including 18 American brands. VF, the parent company of 36 brands, including North Face, Jansport and Timberland, sources apparel from 90 factories employing over 190,000 garment workers. In addition to the 16 universities, another nine have promised to end contracts with VF. (USAS.org, Jan. 26)

Victory for tipped workers in NY

Amid nationwide calls for raises to federal and state minimum wages, tipped workers, for whom the legal minimum is considerably lower, are left far behind. The New York Labor Department announced Feb. 24 that by the end of 2015, the state’s tipped minimum wage will rise from $5 to $7.50 an hour for waitstaff, bartenders, hotel housekeepers and others who work for tips. While labor groups supported the hike, they wanted the increase to be the same as the state minimum wage, which will rise to $9 at year end. Of New York’s more than 229,000 tipped workers, about 70 percent are women. Labor statistics show that tipped workers are twice as likely as other workers to experience poverty. (USAToday.com, Feb. 24)

While politicians sat comfortably inside the West Virginia State House discussing measures to slash workers’ wages and attack labor unions statewide, more than 1,000 activists braved the freezing cold to protest the anti-union legislation deceptively titled “Right to Work.” Those protesting included Food and Commercial Union members, unorganized workers (for whom RTW would make unionizing almost impossible) and a senator and former governor. Protests have erupted across the country as other state governments consider such anti-union legislation. (DClabor.org, Feb. 20)