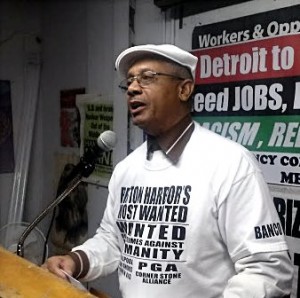 A motions hearing in Berrien County, Mich., on Feb. 27 denied bond to imprisoned community leader Rev. Edward Pinkney, pending the outcome of an appeal to overturn his conviction on five felony forgery charges.

The courtroom was packed with Pinkney’s supporters. At least 30 people waited outside because there was no room inside. Pinkney was given a standing ovation when he entered the courtroom wearing handcuffs and prison clothes.

Pinkney was convicted by an all-white jury in November and sentenced to 30 to 120 months in prison. He is currently housed at Marquette Correctional Facility, a 10-to-12-hour drive from his home in Benton Township.

He was indicted after a group of residents collected signatures of registered voters seeking the recall of Benton Harbor Mayor James Hightower. Dissatisfaction with Hightower stemmed from poor economic conditions in the majority African-American city, where unemployment and poverty are widespread. St. Joseph, the nearby seat of the county, is nearly all-white and far more affluent.

Over 48 percent of the residents of Benton Harbor live below the poverty line, with a median annual household income of $18,000. (U.S. Census) The estimated per capita income is $9,500.

Pinkney heads the Black Autonomy Network Community Organization (BANCO) in Berrien County. He allegedly changed the dates of five signatures on the recall petitions. During his trial, not one witness claimed to have seen him change any dates.

As the result of a Michigan appeals court decision, the recall election was cancelled and Hightower remains in office, although he is facing re-election later this year. Supporters of the recall, including BANCO, accuse Hightower of being a surrogate of Whirlpool Corp. based in Benton Harbor.

During the course of Pinkney’s trial, prosecutor Michael Sepic asked witnesses about their views on Whirlpool and BANCO’s political outlook toward the multinational firm. Judge Sterling R. Schrock allowed the questions into the court record.

In 2010, the publicly owned Jean Klock Park was turned into the Jack Nicklaus Signature Golf Course on Lake Michigan. In 2012, Pinkney and BANCO organized “Occupy the PGA” demonstrations when senior golf tournaments were held in Benton Harbor.

BANCO’s recall campaign came after Hightower refused to support a measure that would tax corporations in order to create jobs and rehabilitate the infrastructure of the blighted and economically depressed municipality.

The city has a long and sordid history of racism and police misconduct. In 2003, people rose up in rebellion after an African-American motorcyclist was chased to his death by several law enforcement agencies in the region.

The Michigan American Civil Liberties Union filed an amicus curiae brief in support of Pinkney being released on bond. It argued that, even if Pinkney had committed the alleged offense, it would only be a misdemeanor punishable by 93 days in jail. Although the judge set an evidentiary hearing on two of the motions filed, he would not set an appeal bond for Pinkney.

The ACLU argued, “Rev. Pinkney’s likelihood of success on appeal in this case is extremely high. … If bond pending appeal is not granted in this case, Rev. Pinkney will suffer irreparable harm because he will have served much more than a 93-day sentence.”

The immediate issue during the Feb. 27 proceedings was to have the 66-year-old released until a Michigan appeals court makes a decision on the constitutionality of his conviction. There was also a request to have Pinkney moved to a correctional facility closer to Berrien County so his family and legal counsel can consult with him on important matters. Judge Schrock refused.

People attended the hearing from throughout Michigan and Illinois. Many organizations had representatives, including BANCO, the Moratorium NOW! Coalition, National Lawyers Guild, Michigan Welfare Rights Organization and the People’s Tribune newspaper.

The evidentiary hearing on two of the motions filed is scheduled for April 14. Local and national civil rights and human rights activists are urging people to continue to build support for the BANCO leader.