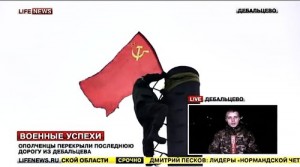 The independent people’s republics of Novorossiya celebrated an historic victory of the anti-fascist people’s militias over U.S.-backed Ukrainian military forces near the railroad hub town of Debaltsevo on the shared border of Donetsk and Lugansk in the Donbass region.

Thousands poured into Donetsk city’s central square on Feb. 23 under the statue of Soviet leader V.I. Lenin to mark their second decisive military victory over Ukraine’s vastly larger, better equipped forces in less than a year.

At the same time, Donetsk Prime Minister Aleksandr Zakharchenko cautioned that the Kiev junta of oligarchs, neoliberal politicians and fascists was marshalling for a new offensive, perhaps as soon as late March. (RIA, Feb. 23)

Democrats and Republicans in Washington continue pushing to send $3.5 million in heavy weaponry to continue Kiev’s bloody war. According to the United Nations, 5,700 people have died in fighting since Ukraine attacked last April.

How did the victory come about?

As a new ceasefire agreement was being negotiated by Kiev, Moscow, Paris and Berlin in mid-February, Novorossiyan forces successfully encircled several thousand Ukrainian troops using a World War II-era Soviet military maneuver called a cauldron. The “lid” of the cauldron — preventing the free movement of Kiev’s troops and supplies — was slammed shut in the area of the town of Debaltsevo.

After the second Minsk ceasefire was inked on Feb. 12, Donetsk Prime Minister Zakharchenko reported that it would not affect the militia’s efforts in the cauldron. Last September, in contrast, Novorossiyan forces were pulled back from the gates of the Ukrainian-occupied port city of Mariupol when the first Minsk ceasefire took effect, reportedly at the Russian government’s insistence.

After days of intense fighting, the Ghost Brigade commanded by Alexei Mozgovoi and other Novorossiyan forces swept into Debaltsevo and surrounding villages on Feb. 18, freeing residents held as virtual hostages in their basements for weeks by the occupiers. International communist volunteers in the Ghost Brigade’s Unit 404 played a key role in the operation.

Hundreds of Ukrainian troops surrendered. Thousands more were allowed to leave — but only after abandoning their weapons and equipment to the Novorossiyan militias.

Novorossiyan forces are still clearing out pockets of resistance from hardcore fascist elements of the National Guard and volunteer battalions and gathering an enormous amount of abandoned arms and war material, much of it from the United States and other NATO powers.

While Russian news reports showed Ghost Brigade Unit 404 raising the Soviet red flag over Debaltsevo, some 100,000 people marched in Moscow Feb. 21 to protest the anniversary of the Ukrainian coup. Others  marched in cities around the world, from Brussels to New York.

Would this defeat convince the Obama administration and Republican Congressional leaders to reconsider their belligerent course toward increasing arms shipments to Ukraine and threatening Russia, which played a key role in securing the Feb. 15 ceasefire?

Republican Sen. John McCain, who in December 2013 appeared at a EuroMaidan rally in Kiev with neo-Nazis, rejected the ceasefire deal out of hand.

And just as before, Ukrainian forces continue to violate the ceasefire with daily terror attacks on civilian targets in Donbass.

“The fire is not as loud and frequent as in January and early February, but a total silence is out of the question,” a Donetsk resident told Sputnik News Feb. 22.

Poroshenko announced the formation of a 4,500-strong Ukraine-Polish-Latvian military division — a possible prelude to NATO intervention by these U.S. client regimes. (RT.com, Feb. 20)

What next for Donbass?

Ukrainian Deputy Minister of Foreign Affairs Vadim Pristayko boasted to the Canadian Broadcasting Corporation that Ukraine is preparing for a “full-scale war.” According to him, Kiev is “no longer afraid to enter a conflict with a nuclear country.” (tinyurl.com/o7zokru) Poroshenko ally Vadim Denisenko told Ukraine’s Channel 5 that he hoped for NATO bombing in the next several months. (Sputnik News, Feb. 18)

Poroshenko has also called for Western peacekeepers to be stationed in the conflict zone.

Poroshenko’s own future is now in doubt, however. Many are asking if he will be pushed out by oligarchs further to the right and their neo-Nazi agents like Dmitry Yarosh, head of the infamous Right Sector. Yarosh declared that his fascist gang would keep fighting despite the ceasefire.

The role of communists and radical anti-fascists like Alexei Mozgovoi in the Debaltsevo victory should give a welcome boost to the left pole in Novorossiya as the people’s republics prepare to mark the 70th anniversary of the May 9, 1945, Soviet victory against Nazi Germany.

At the same time, Ukraine’s renewed offensive in January, and its defeat in February, is a setback to those who thought an accommodation with the junta was possible or even desirable.

For more than two decades, U.S. strategy has been to work toward the break-up of Russia to make it easier to control and exploit that region. This has continued under both Democrats and Republicans, conservative and “liberal” administrations. Kerry’s words show Washington is still determined to place NATO bases on Russia’s western border to pressure political change in Moscow.

Today Novorossiya is the front line of armed resistance against austerity, fascism and NATO expansion. The people’s republics need international solidarity to guarantee their military victory turns into a powerful movement to push back U.S.-NATO expansion throughout the region.