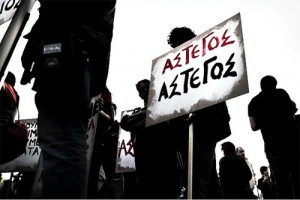 Feb. 24 — The leftist Syriza government in Greece has accepted a negotiated retreat from its election promises after a faceoff with the European bankers, led by German finance capital. This ends the latest phase of the struggle of the Greek people against austerity. But this struggle, while it may be paused, must not be allowed to die.

What has ended is the idea of getting out of debt slavery to the predatory bankers of Europe through negotiations, without breaking with the euro currency zone altogether.

The phase of conciliation — of trying to placate the financial powers in Berlin, Paris, Rome, Madrid and Amsterdam through negotiations and appeals to reason in order to get their consent to lift the chains of debt slavery imposed on the Greek masses — has proven illusory. While the negotiations may go on for a while, this strategy can never be taken seriously again by the Greek population.

After two weeks of negotiating with 18 hostile governments and finance ministers, the newly elected government headed by Alexis Tsipras reversed its fundamental positions. It had earlier pledged to break with the austerity regime imposed on Greece by the Troika — the International Monetary Fund, European Central Bank and European Commission. Previous regimes agreed to these onerous conditions in return for bailout loans to Athens.

With money flowing out of Greek banks at a rate of 2 billion euro a week and the ECB choking off all credit, the new government was rapidly running out of money. The German bankers were squeezing Syriza so hard that it faced a choice of financial collapse or political humiliation — if it agreed to remain in the eurozone.

In the settlement now cautiously and conditionally agreed to by the European finance ministers, the Syriza government has agreed to live within the basic guidelines of austerity established by and supervised by the Troika, renamed in a face-saving measure as the “institutions.” The IMF and the ECB are already expressing concerns about the agreement.

The Greek government will now be eligible for a 7-billion-euro loan that was scheduled to be paid on Feb. 28. However, the ECB and EC have said the money will not be paid until the concessions outlined by Syriza are implemented. As of this writing, it has not been specified how the government will avoid imminent default, but presumably this has been worked out.

Syriza given some latitude

Syriza retained some latitude to allow the Greek government to shape the terms of its austerity program, subject at all times to the auditing and approval of the “institutions.” Syriza emphasized in the agreement that it would seek unpaid taxes from the rich, deal with corporate fraud and take other measures to raise revenue that would not negatively impact the masses.

There is so much corruption in capitalist society that Syriza may be able to squeeze billions out of the Greek ruling class and the bureaucracy in order to hand a good chunk of money to the euro bankers.

Syriza has written into the agreement the right to increased government spending and distribution of aid to the poor through (slowly) raising the minimum wage, raising pensions, providing health care and other possible measures to immediately ease the economic crisis for sections of the population. But all this must be approved by the Troika.

So all the original pledges of Syriza — not to deal with the Troika, to demand a sharp debt reduction, to refuse the bailout and to reverse the harsh austerity measures imposed on the Greek people — have been abandoned in the face of extreme financial extortion by the euro bankers.

While there is no justification for this retreat, it should be noted it was made under extreme duress. Syriza was in office for only one month and did not have time to get a grip on the government or its finances, let alone prepare for the economic aggression following a break-up of negotiations. Most of the month was consumed in arguing with the bankers. Thus Syriza was not prepared to fend off economic strangulation threatened by Berlin.

This latest agreement with the “institutions” is unstable. It could be upset by either a rebellion among the Greek masses or even harsher intervention by the bankers, or both.

But at the moment there is a temporary break in the struggle. And it is necessary to  assess what happened in order to go forward. There are many aspects of the struggle to review.

After it won and continued to make its declarations, its popularity went up to 75 to 80 percent! The people who moved over to Syriza after the vote were mainly followers of the center-right New Democratic Party. Thus, the broad masses, despite their identification with the big capitalist parties, came out in support of Syriza’s struggle against austerity once they saw it was not just a promise but concrete measures were being laid out.

Marxists should know that such a vast and sudden shift in the political orientation of the broad population indicated the Greek masses were reaching the point where they could not go on in the old way and were willing to shift their allegiance to a party they thought could relieve their suffering. The fact that the people were mistaken about Syriza should not cause other left forces to ignore this dramatic signal. On the contrary, they should take advantage of it.

Among the lessons of the struggle is that parliamentary victory alone cannot be sustained without the mass struggle on the ground, and that it will be necessary to escalate the class struggle to push back austerity.

Almost half the population is living at or under the poverty line. People have been foraging for food and firewood in the forests, going through garbage dumps and eating in bread lines. They are living without health care, social services, electricity, transportation and so on. Under these conditions, the Syriza campaign against austerity brought about a massive surge forward.

Use ‘breathing space’ to prepare for struggle

The German and other European bankers have no intention of letting Syriza give the Greek people any fundamental relief in the overall austerity conditions. These bankers aim to squeeze every euro possible out of the hides of the Greek masses. The conditions of hardship will continue and the population’s discontent will deepen.

Not enough to merely denounce Syriza

To merely denounce Syriza and stand back while saying the struggle is lost would be negligent. In this regard, it is important to analyze the positions taken, especially by Marxist organizations that have denounced Syriza for not fighting for socialism and for confining the struggle to capitalism.

This amounts to a rationalization for not giving this struggle revolutionary critical support because it is being led by Syriza. The struggle between capitalism and socialism has never been the axis of the current struggle. The central focus of the struggle is against Troika-imposed capitalist austerity.

It is ridiculous for leftists to charge Syriza with not fighting for socialism and use this as an excuse to walk away from the struggle. The Tsipras leadership was never going to fight for socialism. Their leadership is Eurocommunist in origin. Eurocommunism, which turned its back on the socialist camp and the Soviet Union, abandoned the class struggle altogether as a form of struggle. Everyone on the Marxist left could anticipate that the Syriza leadership would stay within the bounds of capitalism.

The question, certainly as far as the masses were concerned and objectively, was how to push back the bankers and relieve the horrendous conditions of debt slavery imposed on the Greek people. This should have been a signal for Marxists to plunge wholeheartedly into the struggle, to make the demand to get out of the eurozone, while patiently and persistently explaining to the masses that the correct road is to get out of the heartless grip of European finance capital and to fight capitalism as the only road to end austerity.

Any party that brought such a message to the struggle would have been truly vindicated by the present turn of events and could have increased its influence and the influence of revolutionary thought in Greece today. To do that would have been to follow the Leninist tactic of giving revolutionary critical support to a struggle being waged by political opponents, no matter how reprehensible they may be, while retaining an independent revolutionary program.

If the masses are enthusiastically following the social democrats out of lack of knowledge, then revolutionaries have to find a way to get a hearing and bring that knowledge to them. To do that, Marxists must be in the struggle against austerity, side by side with the masses. That is how to link the fight against austerity with the struggle against capitalism and for socialism.

While Marxists bring their full program to the struggle against austerity, it is erroneous to make it a condition that reformists make the same links. It is precisely because they are reformists that they won’t make those links.

Hammers and sickles needed on streets

Hopefully, in the next phase of the struggle the euro bankers will see an escalation of the mass struggle, with hammers and sickles on the streets among the popular masses in a continued fight to roll back austerity. The threat of an anti-capitalist struggle could become a factor that causes the euro bankers to pause in their campaign of economic aggression.

If it is possible to rally the masses to force a break with the eurozone, then the government will have to be prepared to take strong measures, such as nationalizing the banks and big firms and instituting controls to keep wages flowing, prices down and prevent hoarding. Thought must be given to international commercial relations and all other measures that will have to be taken if Greece breaks with the eurozone in the next round of struggle.

This can be started within the framework of capitalism but can be a bridge to the socialist revolution.