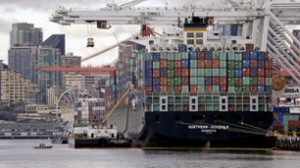 News broke on Feb. 20 that an agreement between the Pacific Maritime Association — the organization of the West Coast port bosses — and the International Longshore and Warehouse Union would allow full-time work to unload a two-month backup of shipping pending a ratification vote of the union. The PMA had imposed mini lockouts for the past months on the union in an attempt to win a contract that left workers at a disadvantage. But the battle is still on.

In Oakland, Calif., once again the bosses caused critically backed-up port work to stop, forcing 300 workers — everyone working that shift — to go home for the day on Feb. 22, while blaming ILWU Local 10 members for the stoppage.

To find out the truth about what was happening in Oakland — which processes 10 percent of the $2 trillion in goods loaded and unloaded on the West Coast each year — Workers World spoke with Trent Willis, former president and business agent of Local 10 with 22 years experience on the docks. Willis is also the originator of the 2004 Million Worker March in Washington, D.C.

Willis made it very clear that ILWU members did not walk off the job on Feb. 22, as was widely reported; in fact, they were “fired” by the Pacific Maritime Association. ILWU Local 10 has a well-earned reputation as a progressive local that has played an important role in political struggles such as the historic battle to end apartheid in South Africa.

Despite a tentative agreement announced Feb. 20, the PMA sacrificed fully three-fourths of Sunday production in Oakland when it “fired” all day shift longshore workers — including Willis. Instead of calling out the PMA for stopping work, an area arbitrator that Willis identified as Terry Lane did just the opposite: He immediately approved the bosses’ action.

Lane, who was formerly a vice-president of the Pacific Maritime Association, is notorious for his pro-boss decisions. He is due to be replaced as an arbitrator in the proposed contract.

KTVU reported, “In a statement the Pacific Maritime Association said ‘an area arbitrator’ ruled the unit breaks, ‘illegal work stoppages,’ resulting in port operations being shut down’ during the day shift.” (tinyurl.com/nec8cnq)

Willis explained that Local 10 members also attempted to get back to work after the tentative agreement. “We were told over the radio that if we took a unit break we would all be fired,” explained Willis, “even though that’s what it says to do in our contract.”

The PMA wants the workers to take their break one at a time, what it calls “tag relief.” But according to the contract, to assure continuous operation during breaks, the PMA must request additional workers to be on hand. According to Willis, it was these additional workers who were sent home first, leaving the workers with a unit break as the only reasonable option that honored the contract.

The most recent contract expired last July 1. After stonewalling negotiations with the ILWU, the PMA began this “firing” tactic last fall, according to rank-and-file ILWU members. The bosses then blamed port workers for the shipping crisis affecting everything from auto parts and agriculture to Mardi Gras beads. Thus, the PMA created the shipping crisis, first by not negotiating a contract with the ILWU before the expiration date, then “firing” crews and finally by ending night shifts, along with weekend and holiday work, for which workers get higher hourly pay.

Willis further explained that the way the PMA used the area arbitrator — Lane — in the Feb. 22 conflict at Oakland also violated past practice. Contractually, when there is a dispute on the job, the PMA and ILWU representatives come to the site and attempt to settle the issue. If it is unresolved after this attempt, only then is the area arbitrator called for a ruling, based on the written contract. Either side can then appeal that ruling to the coast arbitrator responsible for all West Coast ports, who makes a final decision. On Feb. 22, the arbitrator ruled after workers were sent home.

The necessity for impartial area arbitrators was a major issue in these contract negotiations because Lane and other arbitrators took it upon themselves to unilaterally rewrite the agreed upon contract language in favor of the PMA, even on important health and safety issues.

The tentative agreement announced Feb. 20 after intervention by Obama administration Labor Secretary Tom Perez has not yet been discussed or ratified by the ILWU’s 13,000 members at 29 West Coast ports.