Bulletin: On Feb. 23, the Texas Court of Criminal Appeals issued a stay of execution for Rodney Reed in response to his attorneys’ motion, pending a further court order.

Jim Crow justice: These three words describe why Rodney Reed, an African-American man, has been on Texas’ death row since 1998, facing a March 5 execution date. Reed was convicted of murdering Stacey Stites, a white woman with whom he had an intimate relationship in Bastrop, Texas.

Jim Crow justice encompasses the racism of police departments in Texas’ small towns and the racism embedded in the psyches of the Bastrop residents who comprised Reed’s all-white jury.  It includes the racism that frightened potential witnesses who could have testified about Reed’s whereabouts the night of the murder — if they had been called by defense attorneys — and that scared Reed’s two Black court-appointed attorneys so much that they wouldn’t stay overnight in Bastrop during the trial.

Reed’s case is a troubling mixture of prosecutorial misconduct, police corruption, poor defense and institutional racism. New evidence of his innocence has surfaced as it is discovered.  The Campaign to End the Death Penalty, based in Austin, Texas, states that the overwhelming need for a new trial is indisputable. 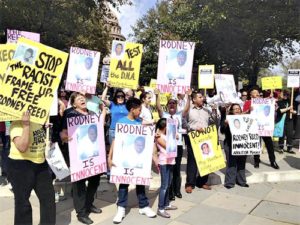 On Feb. 21, Reed’s supporters from Austin, San Antonio and Houston, and his family and friends from Bastrop rallied at the Texas Capitol and marched to and around the governor’s mansion.  Their spirited rally featured Reed’s mother, Sandra Reed, and brother Rodrick Reed.  The militant crowd chanted and cheered, while calling on Gov. Greg Abbott to stop the execution.

On Feb. 12, Reed’s attorneys filed a motion for a new trial and a stay of execution. The motion includes affidavits from two of Stites’ former co-workers, corroborating Reed’s personal relationship with Stites.  Reed maintains they kept the interracial relationship private as it existed in a small Texas community and because she was engaged to Jimmy Fennell, a former police sergeant. The strong evidence supports the defense’s theory that Stites was murdered by Fennell, who is now in prison for sexually assaulting a woman while on the job.

Bruce Benjet, an Innocence Project attorney who has been representing Reed in his death penalty appeal, stated: “In addition to the recantation by the original medical examiner, we now have three of the nation’s most respected medical examiners agreeing that Mr. Reed couldn’t possibly have committed this crime as prosecutors claimed.  Recent Texas law makes it clear that when there is new scientific evidence showing that the defendant is probably innocent, the conviction must be overturned, which is clearly the case here.” (Innocence Project,org)

Reed was convicted on one piece of evidence: his DNA was found in a semen sample taken from Stacey’s body at the crime scene.  However, his trial lawyers didn’t provide witnesses who could testify that Reed and Stites had a consensual relationship. No other evidence connected Reed to Stites or the crime scene.

In recent years, activists in Texas, as well as in Australia and Europe, have fought to publicize the inconsistencies and racism in Reed’s case. The documentary “State vs. Reed: A Question of Justice on Texas’ Death Row,” won a South by Southwest Film Festival award in 2006. See YouTube (tinyurl.com/n4axggh).

The Equal Justice Initiative report issued on Feb. 18, “Lynching in America: Confronting the Legacy of Racial Terror,” documents nearly 4,000 lynchings of African Americans in 12 Southern states between the beginning of Reconstruction and World War II. (eji.org)

The authors assert that lynching reinforced a legacy of racial inequality that is apparent in today’s U.S. criminal justice system.  Mass incarceration, racially biased capital punishment, excessively harsh sentencing, police terror against people of color and their disproportionate sentencing reveal problems in U.S. society that were shaped by the terror era.

“Death penalty activists are aware that executions are nothing more than legal lynchings,” said Joanne Gavin, of the Texas Death Penalty Abolition Movement.  “We have a broken system that cannot be fixed. We must shut it down and stop the executions.”